An action pack week of sport comes to a close – lets take a look at some of our most notable winners from the past seven days.

Late Man United winner does the business for £12,834 Pick 4 winner

Everyone has their own approach to a Correct Score Pick 4 and it’s nice to see someone throw a curve ball once in a while! The Friday night coupon had a Bundesliga offering in leg 1 and this punter had gone big, covering a total of 11 scores. As luck would have it, a good one landed, Eintracht Frankfurt registering a 3-0 win. From here on in, there was less room for error.

Aston Villa vs Bolton – a Premier League game from yesteryear – ensured the ticket would live on to see Saturday for the win prize, Villa running out comfortable 2-0 winners.

Leg 3 provided the lunchtime game on the coast between Bournemouth and Man Utd. Only a 2-1 win to the visitors would be good enough for our Pick 4 hopeful. With the score sitting at 1-1 and the game now in stoppage time, was the 4/4 dream slipping away? Worry not, this is Man United, where the late winner can never be ruled out. Marcus Rashford popped up with a goal to deliver a 2-1 win for the visitors. 3/3, was it time for some Cash Out?

The final leg takes us to Cardiff and there’s not much to be said about the circumstances in which Leicester found themselves in ahead of the game. Few would have begrudged them a win and the 1-0 winner hit by Demarai Gray did the business for the Foxes.

On the face of it, you might think this punter was playing for a Cash Out after leg 1, but they ignored all offers and went the distance to win a massive £12,834 from a £22 bet! Superb.

Are you kidding me? Syndicate slam dunks in NBA Point Margin Pick 5 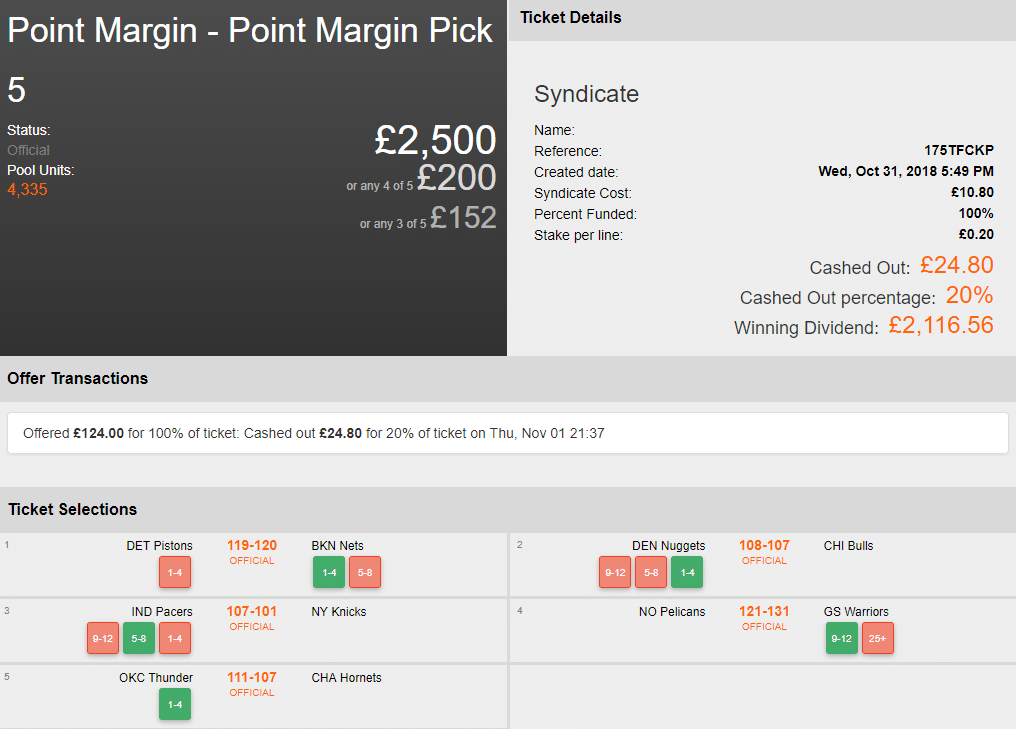 The NBA season is just three weeks old and it has already provided ample entertainment for Colossus Bets players. Two weeks ago, one Solo player’s £8 ticket went on to win £27,787 and last week it was the turn of a Syndicate to score a bucket.

Captain bbtipster’s £10.80 ticket was joined by 8 other players as they took aim at a Point Margin Pick 5 that tipped off on Wednesday night. Having covered three selections in legs 1-3, they progressed quite comfortably. A safe Cash Out of £24.80 for 20% of the ticket ensured that every contributor secured a little over double their stakes and they were freerolling the rest of the way.

In leg 4, bbtipster assumed that Golden State Warriors (winners of 3 of the past 4 NBA Championships) would win by a healthy margin at home to the Pelicans and the Syndicate hit the 9-12 margin!

On to the final leg where they were relying on just one selection – the lowest Point Margin victory (1-4) for the Oklahoma City Thunder away at the Charlotte Hornets. Russell Westbrook flirted with a triple-double; scoring 29 points, 10 assists and 8 rebounds as the Thunder emerged as winners by a scoreline of 111-107, thus securing victory for the Syndicate.

Syndicate stays on in Place 6 at Newcastle

When an odds-on favourite is unplaced it opens up the possibility for huge payouts in our Place 6 pools. Exactly that happened on Saturday as Oscar’s Ridge (1/9) was unplaced after being beaten by Kyoto Star (28/1) and Tomorrow’s Angel (16/1) in the first race at Newcastle.

Remaining Units dwindled from 4,195 to 32.7 after just one race! Anyone still involved in leg 2 had done a great job and if you were still alive in the pool at the end of leg 3 then Cash Out offers will have been significant.

One Syndicate, Captained by ‘If I Can Dream’, survived the smash in race 1 and opted to Cash Out 50% of their ticket for £622 after leg 3, securing contributors just under 13 times their stake.

The Syndicate then went on to win the pool, without Cashing Out anything else and were returned a further £839 at the end of the pool.