What a week for Pick 4 punters it’s been. With last week’s Premier League Pick 4 Rollover reaching a total prize of £316,573, there was everything to play for on Tuesday night!

In leg 1 we saw Everton give Cardiff a masterclass in their own backyard, sending 3 goals past Etheridge in a flourish of style. This knocked the pool from over 187,000 units down to just 3,283 units. After leg 2, a 1-0 win from Huddersfield meant just 561 units made it through to legs 3 and 4.

One solo punter played a blinder, locking up a whopping £2,518.54 after those two matches, Cashing Out 50% before the last two legs and giving them a solid return before Wednesday’s matches kicked off. At a ticket cost of just £48, this punter knew they’d be celebrating no matter what happened! 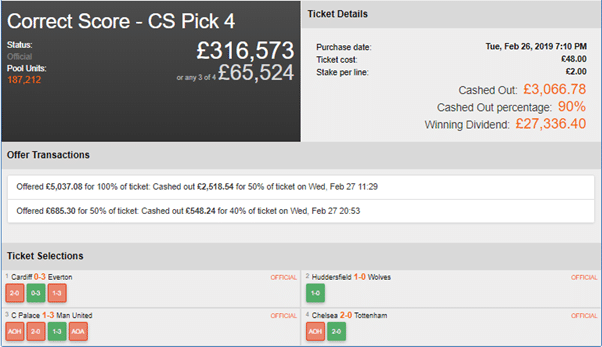 When it came to half time during legs 3 and 4, a further 40% was taken to secure an additional £548, meaning this player had over £3,000 safe and sound, with 10% left to go for a share of the top prize. When the final whistle blew, Chelsea and Manchester Utd wins (2-0 and 3-1 respectively) saw this player go 4/4. We cannot imagine the delight of this punter when they saw a dividend of £27,336 come into their account, on top of their Cash Out.

A hearty congratulations from all of us here at Colossus, be sure to spend it wisely!

Also seeing a key win in the Pick 4 Rollover last week was Syndicate Captain Vuoksenmaa-ESBC, boasting a return of £11,590 for 6 followers on one of his tickets that cost £57.

With risk, though, you can be rewarded. And it seemed to pay off well for the Finnish Captain. Making it through the first 2 legs gave the Syndicate a spectacular Cash Out offer, of which he took 30%, securing himself and the rest of his contributors over £990 at the halfway point in the pool. During legs 3 and 4, he decided to take another 30% for £828, meaning no matter the results, they were guaranteed a return of over £1,800.

It was an excellent decision to leave 40% untouched as both legs 3 and 4 proved fruitful for Vuoksenmaa-ESBC, winning an additional £9,749 for the Syndicate. His contributors to this ticket must have been staggered when they saw their winnings. 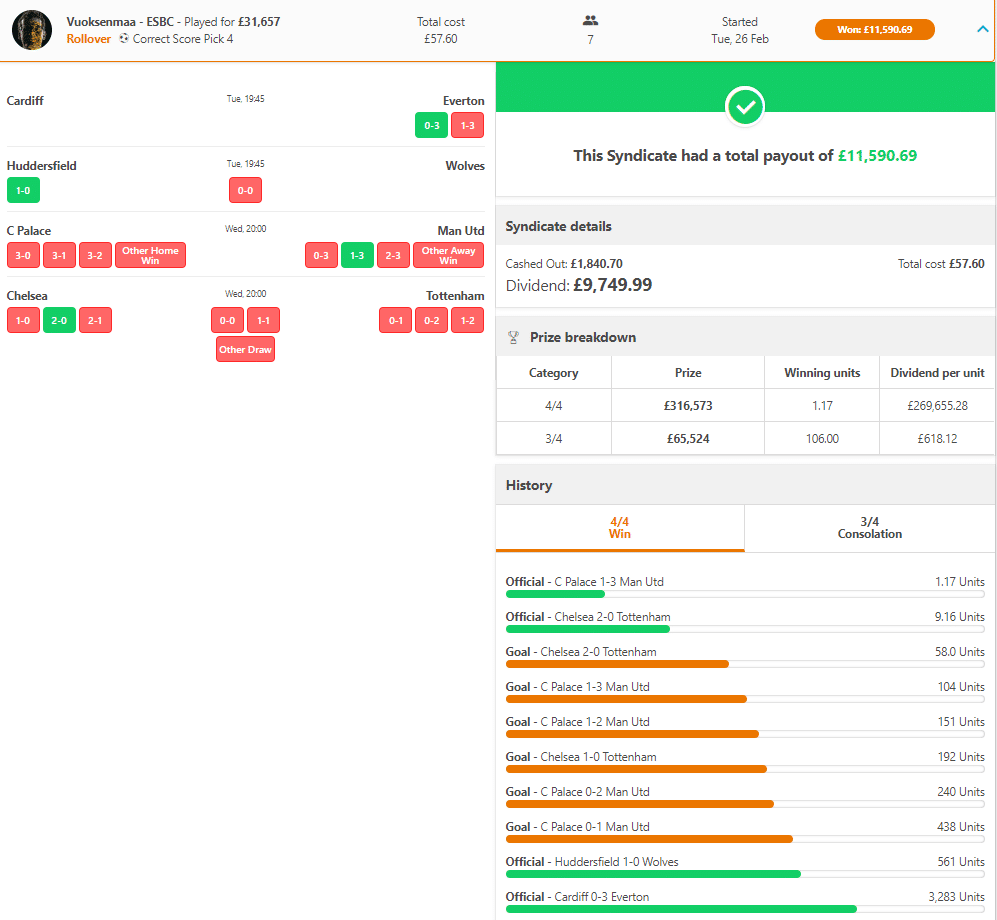 Last Friday saw the Win 6 rollover won by 2.6 units, producing a £8,824 dividend for 6/6 correct selections. This punter played just 10 lines, and scored the massive win that all horse racing punters dream of. 11/1 outsider Ey Up Rocky became the 1st win of the pool, knocking the pool down to a small share of units as 7/4 Fav Crystal Lad was nowhere to be seen. Cruising through the legs, with an excellent choice of slight outsiders Lillington and Jubilani, meant they were looking strong for the final leg. With the favourite Orchardstown Cross storming home by 6 lengths, this player had no fear (they ignored Cash Out offers throughout the pool), letting it all ride and reaping the rewards. A magnificent feat and we congratulate them on the win.

An excellent week for winners, hopefully we can see more of the same over the whole of March!

Place 6 success at Plumpton as Captain Chutney’s Syndicate returns £2,334
Cheltenham Winners (& a couple from the footy too)