Syndicate rejects £97,838 Cash Out offer before suffering cruel near miss

Syndicate rejects £97,838 Cash Out offer before suffering cruel near miss

A Betway Kenya Captain suffered a dramatic near-miss on a rollercoaster of a ticket on Sunday afternoon, after bravely turning down two 52k and 96k Cash Out offers in the Correct Score – Pick 6 pool.

After a superb Saturday, the Syndicate cruised through the opening four legs and, following Liverpool’s 2-0 win, they were through to the fifth leg and was given a £52,251 offer to contemplate overnight. LoneRanger had a big decision to make.

The fifth leg, Elfsborg vs. Hacken, was scheduled to start at 14:00 on Sunday and, as it approached, there was no sign of a Cash Out. Sure enough, the match began and LoneRanger had opted to let it all ride.

It was a brave decision but with three selections made in the leg, 0,1, 0-2 and 1-2 all in favour of BK Hacken, LoneRanger clearly felt that better things were to come. It was an assumption that proved to be correct. 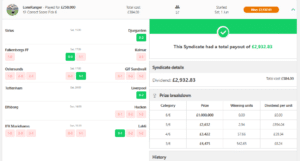 The first half provided no goals but, in the 38th minute, the Syndicate received a massive boost when Gustav Henriksson was dismissed for the home side. With 52 minutes to break down ten men, surely Hacken would now be able to find a way through?

The half-time offer certainly reflected the favourable red card and, despite the lack of goals, the offer had nearly doubled; £97,838 was now on the table.

Clearly adopting the mantra ‘who dares wins’, LoneRanger once again chose to let the ticket ride, assuming that Hacken would capitalise on their numerical advantage.

The Swedes huffed and puffed but they couldn’t blow the door down. Despite dominating the match with 65% possession, 25 shots and 12 corners, Hacken couldn’t find a way through and the match, heartbreakingly, finished goalless.

The ticket wasn’t quite over and, having made eight selections in the final leg, Consolation Prizes were still on the table.  A 1-0 victory for Lahti at IFK Mariehamn ultimately ensured that the Syndicate had five out of six correct scores, a mightily impressive effort, and they were rewarded accordingly with a return of £2,932 as a result, 7.5x their initial stake.

It must have been bittersweet result as, while the sixth leg ensured some chunky Consolation money, it must also have made the result in leg five considerably more painful.

It may not have been the win that they wanted but LoneRanger showed real bravery to allow the ticket to go that far and has to be applauded for that!