The first three legs; Everton vs. Watford, Brighton vs. West Ham and Aston Villa vs. Bournemouth, all began at 3pm on Saturday and the player had a clear tactic in mind, loading two of the legs with multiple selections in order to maximise their chances of progression to Sunday’s games.

They selected five different scorelines in each of Everton vs. Watford and Aston Villa vs. Bournemouth and duly hit the eventual result in each of them. 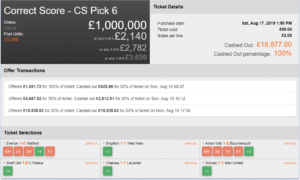 The player apparently had no need to make multiple selections in the fixture between Brighton and West Ham though and only took the 1-1 draw.

Brighton had a goal disallowed by VAR and were punished further when West Ham then took the lead. Fortunately for the Seagulls, that lead lasted just four minutes as they managed to score an equaliser which proved to be the final goal. It was 1-1 and the ticket was through to the Sunday.

The reward for getting three correct scores on the board was a £1,051 Cash Out offer. Eventually the player opted to take 50% of the offer, securing £525.

Four legs down and things were hotting up. Despite only 50% of the ticket remaining, the Cash Out offer had quadrupled to £4,687. With just fifteen minutes until the next leg kicked off, the player sold a further 30%  which secured an additional £2,812.

In the fifth leg, Chelsea vs. Leicester, the player selected a 1-1 draw. The Blues went scored the opener in the first half and should have be been clear by the interval but, no matter how much they huffed and puffed, they couldn’t blow Leicester’s defence down again.

The tide turned after the break as Leicester took control. The villain of the first half, Wilfried Ndidi, saved Leicester’s blushes by scoring an equaliser and and landing The Foxes a point with the match finishing all square.

Things were becoming serious. The player had predicted another 1-1 draw in the sixth leg, Monday’s clash between Wolves and Manchester United. However, despite just 20% of their ticket still going, they were offered £15,538 to Cash Out fully.

It was a big offer and an even bigger decision to make. However, after giving it much thought, the player took the offer to secure a huge total return of £18,877, a 377x increase on their stake.

Once a ticket is fully Cashed Out it’s logical to cheer against your remaining selections in order to vindicate the Cash Out decision. However, on this occasion, that proved a thankless task.

In a match that followed a very similar pattern to Chelsea vs. Leicester, Wolves came from behind in the second half to force another 1-1 draw, the scoreline that the player had selected.

Had they decided not to Cash Out that final 20%, it would have been worth around £138,000. Even more amazingly, with all six correct scores on their ticket, if the player had resisted Cashing Out at all, they would have won a staggering £690,000.

However, it would have taken an extremely brave or reckless person to resist every Cash Out offer and, as far as incorrect decisions go, winning £18,877 is certainly up there with the better ones.

Well done and enjoy your winnings!