Shooting for our NBA Jackpots with Syndicates is ever-popular this season, with players contributing modest stakes into tickets and shooting for a piece of £25,000 in our Point Margin Pick 5 Jackpots.

The Captain of this one – palluallu – set up a €19.20 Syndicate on Friday morning that was playing for a possible €2,500 in the pool. Five other players contributed to the ticket.

Friday night’s 2 legs saw the Pistons ease past the Knicks by 17 points whereas the game over in New Orleans was a closer affair; with the Pelicans holding off the Timberwolves by 5.

Just 7.47 units (from a starting total of 4,168) made it through to Saturday, in which the Captain had nearly a full day to consider the Cash Out offer for the Syndicate. Palluallu chose to let it all ride.

Both road teams won by 9 points in legs 3 and 4, sending the Syndicate’s ticket through to the final leg – Oklahoma City Thunder @ Houston Rockets. They were in a strong position going into the game, with the 1-4 and 5-8 Point Margins covered for both sides.

MVP candidate James Harden’s 42-point-haul wasn’t enough to stop Russell Westbrook’s triple-double and Paul George’s 45 points as the Thunder won 117-112, securing a triumph for the Syndicate in the process. 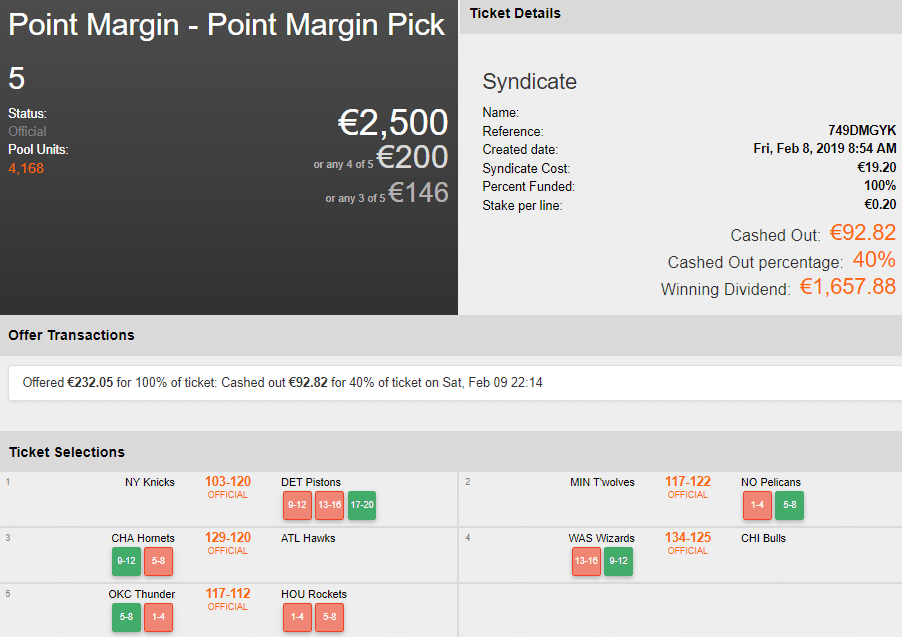 It looked to be heading for elimination from the Jackpot prize with just 10 minutes to play in leg 1 on Friday night! But Aston Villa’s remarkable comeback from 3-0 down helped save this player’s blushes as they went through on an ‘Other Draw’ selection (any draw with more than 2 goals scored in the game).  Elsewhere, on the same night, Balotelli helped his new teammates complete a comeback victory at Dijon as Marseille won 2-1.

On to Saturday morning then, where Manchester United’s good form under Solskjaer continued as the Red Devils dispatched of Fulham, winning 3-0 at Craven Cottage.

It was 0-0 going into half-time and the chance of a win was getting closer. However, with the punter relying on a single selection (Watford 1-0 Everton) would they now consider a Cash Out? No.  They would not. Andre Gray’s 65th minute strike sealed a 1-0 home win for the Hornets as well as a share of the prize for our friend here.

Their £2.40 bet netted them £2,176! Superb effort and congratulations from all of us here at Colossus.