One of the Captains, Artifice, managed to put the ‘win’ in Wincanton on Monday by scooping a stunning £4,471 windfall for his Syndicate in the boosted Place 6 Pool.

The group began the meeting with a ticket covering 960 lines, costing them £96. There was quite a stir in the first race when the 15/8 favourite – Hiupinthesky – fell with two fences to go, eliminating over three quarters of the 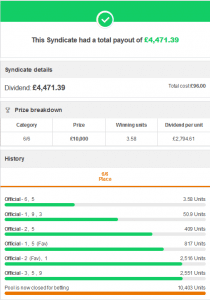 In the following race the syndicate managed to get both of their selections into the places before adopting a safety first approach in the third;  selecting five of the seven runners in what seemed a wide open contest.

Their cautiousness continued into the 15:45, opting to support four of the seven runners, two of which eventually topped the field.

They went into the penultimate race with 96 possible winning lines still open and were cheering Not So Sleepy, Kimberley Point and Miranda into the places. Miranda was no help, pulling up when two fences out, and Not So Sleepy led for the early part of the race before eventually coming fifth.

Hopes rested on Kimberley Point, who was soon locked into a titanic tussle with Green Or Black for the final place but, fortunately, held on to keep the ticket alive.

As the syndicate settled down to watch the last, in which they had two chances, they must have felt supremely confident as one of those selections was Storm Arising, the 1/2 favourite, as well as Hey Bud.

The race was progressing fantastically for them and both horses looked set to fill the places as they approached the last, having run well clear of the field. However, Storm Arising had tired and clattered into the final fence before stumbling upon landing which allowed Éclair Des Sablons to nick second place right at the post.

With Storm Arising surely a banker in most tickets across the land, Artifice’s decision to include Hey Bud as back up proved to be extremely shrewd, and was one which netted the group a £4,471 share of the £10,000 on offer. Congratulations to all involved in a fantastic win!

Amazing – Syndicate Captain @FryBoyRacing and his Syndicate scoop £4,471 in the Place 6 at Wincanton ?

Find a Syndicate and get involved ?#WeWinTogether