An action packed week showcasing the Premier League, Champions League, NFL, NBA and Horse Racing comes to a close. Take a look a the stand-out winners from the past 7 days.

Here we have an £8 ticket played into an NBA Point Margin Rollover last Wednesday a couple of hours prior to tip off in the first game.

Two 7 points victories saw this punter go through legs 1 and 2 before Golden State (NBA Champions in 3 of the past 4 seasons) beat the Washington Wizards by 22 points as their audacious single selection landed in leg 3.

On Thursday morning they made a Cash Out of £602 for 30% of their ticket, securing £594 profit. This seemed a shrewd decision given they had two selections in leg 4 and just the one selection in leg 5.

Their prediction of an easy win for Portland was spot on in leg 4. Then in leg 5, the Los Angeles Lakers – now home to Lebron James – beat the Denver Nuggets by 7 points (the third time a 5-8 Point Margin victory would occur in the pool).

Their shot at the Rollover prize hit nothin’ but net as their £8 ticket returned a total of £27,787! 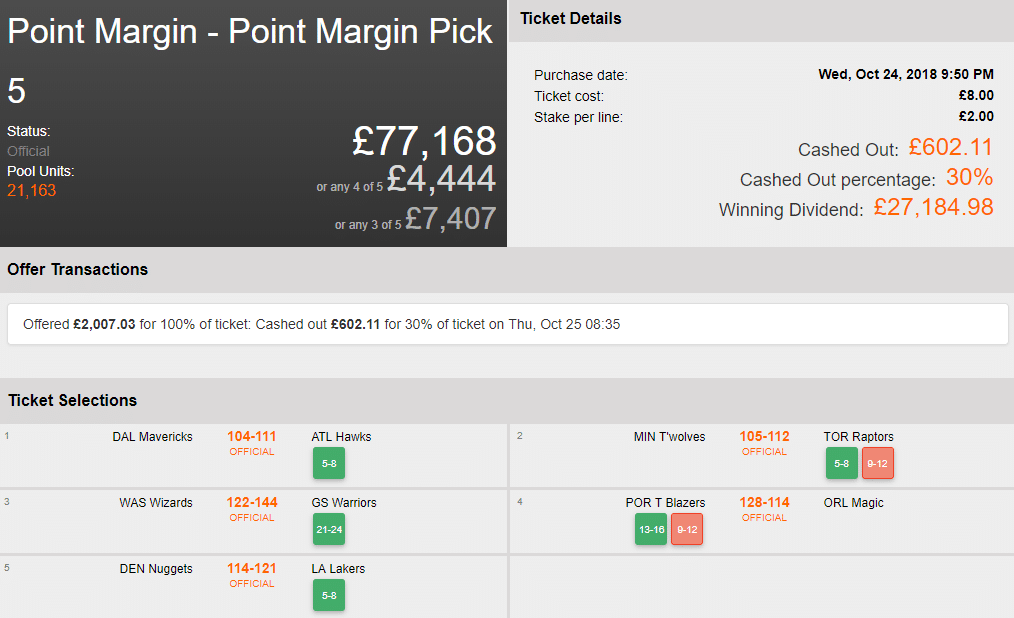 Juventus, one of the front runners to lift the Champions League this season, lined up at Old Trafford on Tuesday night in what turned out to be a relatively straight forward day at the office for the Old Lady. Cruising for much of the game, they were rarely troubled and eased to a 1-0 win.

Meanwhile, the blue half of Manchester were also in action over in Shakhtar (where no Premier League team had ever come away with a win). That was about to change. Pep’s easy on the eye side, put together a quite frankly arousing display to run out 3-0 winners. Pep was purring, we were purring and so was this Pick 4 player, who went 2 out of 2 in the Pick 4.

Moving in to the final two legs on Wednesday night, our punter’s two line ticket had Spurs to win 2-1 and also ‘Other Draw’. With the score sitting at 2-1 to Spurs, would the North London team hold on for a much needed three points? They would not. A late equaliser landing for PSV – superb news for this punter and that was topped off when Barca nailed Inter Milan with a 2-0 win. The winning dividend for this £2 outlay resulting in a massive £7,828.

The NFL crashed into London last weekend and we boosted Sunday’s NFL Point Margin Pick 4 with a doubled prize guarantee. Ones FreePlay punter used their €0.50 token quite brilliantly – their single line sensation landing them €607!

Superbowl LII Champions – the Philadelphia Eagles – took care of a tame Blake Bortles performance (and the Jaguars) before the Kansas City Chiefs kept the ball rolling with a win over the Broncos. The Redskins downed the Giants at the MetLife Stadium. Then, in the final leg, the Green Bay Packers threatened to put an end to the LA Rams unbeaten start but they fell just short. No qualms from this customer whose 1-6 Point Margin selection on the Rams was right on the money. Nicely played!

The jumps season is back and Cheltenham goers will have been delighted to get to the first meeting of the season at the famous racecourse.

None more than the above expert (seemingly) who played a cracker into the Win 6 on Friday. They were confident (or ballsy) enough to cover just one selection in the first five races – and they all landed!

To be fair, they did have the favourite selected in the first four races which all won. But they landed an impressive 11/2 winner in Thomas Darby in the penultimate race in the pool.

They had selected four horses in the last race in which 19 ran. Interestingly they left the favourite (Cornish Warrior) out of this one. Sam Red 11/1 ran home to victory to secure the punter a lofty £11,209 from just an £8 bet! Well played that punter!