Have you ever wondered just how valuable a Colossus consolation prize can be? An incredible story unfolded over the weekend as one Syndicate Captain landed a staggering five-figure return from a losing ticket.

An initial batch of six matches got underway at 3pm on Saturday afternoon. Wins for Hibernian and St. Mirren, plus draws in the Dundee Utd vs. St Johnstone, HJK Helsinki vs. KuPs and SJK vs. Haka games, all went in the Syndicate’s favour. 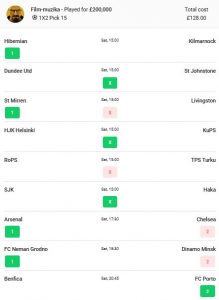 However, in the sixth leg Film-muzika needed a draw in the Finnish Veikkausliga clash between Rovaniemi and TPS Turku. The Syndicate watched on in enormous frustration as a topsy-turvy game saw Rovaniemi level to make it 2-2 in the 85th minute before TPS Turku snatched a last-gasp winner three minutes later.

However, consolation prizes at Colossus can be extremely valuable, especially in the larger pools, and wins for Arsenal, FC Neman Grodno and Porto on Saturday evening meant that the Syndicate finished Saturday with a very healthy eight winners from nine legs.

At the close of play all but 0.08 units had been wiped out of the jackpot pool, from an initial 16,181 which had entered. 14.4 units were still in contention for the 14/15 consolation prize of £20,000 though, with Film-muzika and their followers holding several of them.

Things went from good to great on Saturday as the next four legs arrives. Draws in the Helsingborgs vs. Hammarby, Kalmar vs. AIK Fotboll and Varbergs vs. Ostersunds matches all went in the Syndicate’s favour and were supplemented by a win for Malmo away to Goteborg. 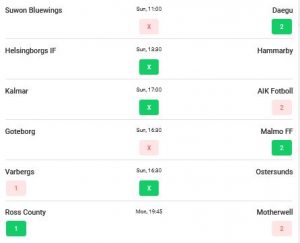 In the Pick 15, a consolation prize is paid even if you only get 11 of the 15 legs correct. However, as the day’s action concluded on Sunday, Film-muzika and their Syndicate had 13/14 in the bag and far loftier ambitions.

Just one leg stood between them and a share of the £20,000 that was still in play as the top consolation prize available. The final match in the pool was Ross County vs. Motherwell and the Syndicate had backed both the home side and the away side. Anything but a draw would do.

The Scottish Premiership game got underway at 19:45 on Monday evening and after 24 minutes the home side raced into a lead after Ross Stewart converted a penalty. Could County hold on?

They were under the cosh for much of the game, ceding 60% possession and 15 goal attempts. However, only one was on target which summed up Motherwell’s issues.

As the match drew on, the Syndicate must have been increasingly confident of avoiding the draw until disaster struck in the 73rd minute as the away side were also awarded a penalty.

Where Ross Stewart had succeeded, though, Liam Donnelly couldn’t and his poor effort dragged left of the goal to keep the ticket alive. Ross County held on to secure a win that would earn the Syndicate a staggering £19,999.05 return for their initial £128 stake, landing each contributor a 156x return on their investment.

Congratulations on a fantastic consolation prize win from all at Colossus.