What a weekend for Racing fans at Colossus as we celebrated some great Solo and Syndicate winners.

Our Saturday 7 was taken down by three solo players, including one Finnish player who managed to win €40,171 from their FreePlay ticket! Another Solo player placed a gutsy bet into the pool which paid a dividend of £81,079!

Then on Sunday, there was some Syndicate success as Geegeez managed to win the Place 6 at Navan and took home £1,573!

It wasn’t just the Racing where Colossus players won big this weekend, there were some huge football winners too! A Solo player and a Syndicate won a part of our £1,000,000 Pick 6, with the Solo player banking over £62,000! Read more on that here.

Let’s get down to business and take a look at the weekend’s big Racing winners.

Helsinki based Juha holds an interest in Scandinavian Racing but doesn’t follow British Horse Racing with such a keen eye. Nevertheless, he jumped at the chance to play his FreePlay into our Saturday 7 on the weekend and placed it shortly after the pool was live on the site on Friday night. His ticket was based on a mixture of favourites and second/third favourites in each leg.

When he returned home from work on Saturday evening (which might be the reason why there was no sign of any Cash Outs) and logged into his account, he was stunned to see a balance of over €40,000!

‘I thought that it must have been a mistake, so decided to log out and log in again to double check!’

There was nay error as Juha realised he had won a share of the €179,555 prize! That should serve as a reminder to you to place your FreePlay when you see one in your account!

“I couldn’t sleep on Saturday night as that winning feeling sunk in – I may just consider using some of the funds to pay for a trip to The Big Apple before Christmas!”

Congratulations to Juha from everyone here at Colossus. 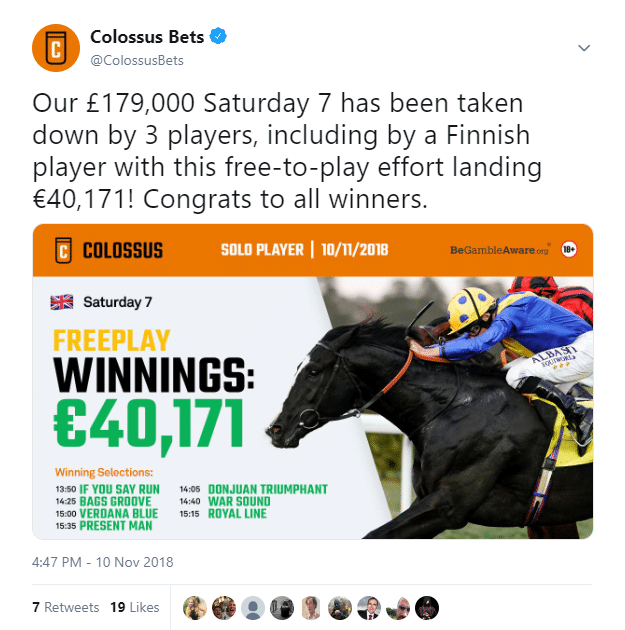 Opting to play for the full prize, this player placed their £144 ticket a few minutes prior to the off in leg 1 of the Saturday 7. Their decision to choose three selections in the first race helped ensure they went through to leg 2 as Harry Cobden won on If You Say Run (the favourite).

The punter banked on favourites in legs 2 and 3 as well, Donjuan Triumphant pipping Hey Jonesy in the Wentworth Stakes at Doncaster before Bags Groove won by 9 lengths at Wincanton.

It was the November Handicap (leg 6) that was going to provide a real test as there was 23 that ran. Our Racing punter picked 6 selections and it was 9/1 Royal Line who ran strongly to beat off the competition, including 7/1 (fave) Now Children.

Were they tempted by a Cash Out going into the last where they had just one selection? Apparently not and they would prove to be the correct decision because Bryony Frost and Present Man claimed the Badger Ales Trophy Handicap Chase for the second year running to secure this punter £81,079!

Huge respect to this customer for their big bet that more than paid off. Outstanding.

£5 ticket goes the distance too

The theme of not Cashing Out continues here as we’ve our third Solo player who won a piece of the pie on Saturday.

Single selections in all but one leg on this ticket and similar to the previous ticket, it was leg 6 that this punter recognised as the potential stumbling block. They went for five selections in leg 6. 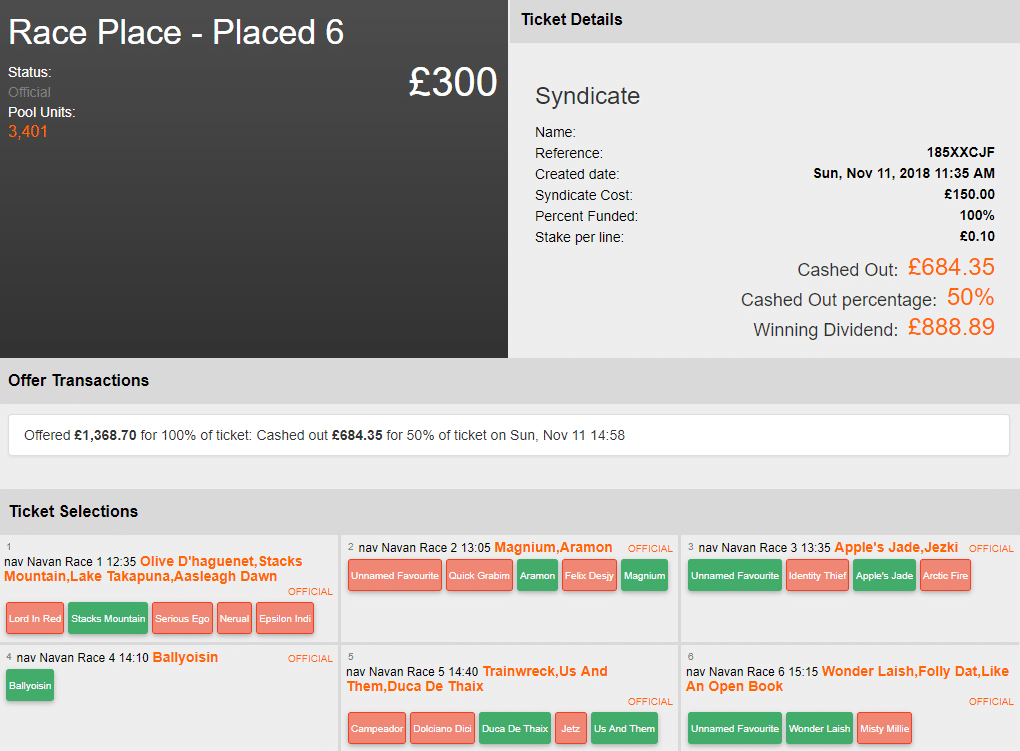 A nice Geegeez Syndicate into our Place 6 at Navan on Sunday was a fruitful venture for 22 people.

Just one of three joint favourites placed in race one (Stacks Mountain) and the favourite in race two (Felix Desjy) was also unplaced, eliminating lots of punters from the pool after just 2 races. But not the Geegeez Syndicate. They had Stacks Mountain in the first and 1st and 2nd place in race 2.

3,401 units had already dwindled down to 42.4 before race three went off. Again Geegeez scored on 2 lines, giving them the possibility to win on 4 lines already.

Ballyoisin was a banker selection for the Syndicate in race 4 and it won by a comfortable 23 lengths.

Race five was a terrific result for the Syndicate as they had 2 placed horses and the fave didn’t manage to place, meaning 3.50 units remained with just one race left. Geegeez were live into the last leg with 0.8 units (1 x 2 x 2 x 1 x 2).

The Captain Cashed Out 50% of the ticket prior to the final race, locking in £684 for the Syndicate (contributors had now made 4.5 times their stake).

Wonder Laish ran to victory in the last, securing the Syndicate a victory and another 2 winning lines. They had won on 16 lines in total, making up 1.60 of the total 2.70 winning units.

Contributors had been returned 10 times their original stake! Congratulations to all those who got on.