A Betway Ghana customer watched with horror over the weekend as a 1X2 Pick 15 ticket that they had Cashed Out for £130 went on to be worth a staggering five-figure amount.

The first seven fixtures on the 16 line ticket were scheduled to kick off at 15:00 on Saturday and it got off to a dream start. Wins for Burnley, Blackburn, QPR, Wigan and Preston, in addition to draws in Sheffield Wednesday vs. Fulham and Bristol City vs. Swansea, meant that by 17:00 the player had the perfect seven winning legs on the board.

As a result, a Cash Out offer of GHS894 (£130) was incoming and, with just 12 minutes until the next leg, the player chose to take the lot. The return was just under 56x their original stake so, from that perspective, they might have reasoned that it was a solid return on their initial investment. 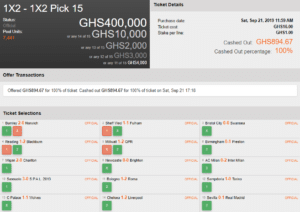 However, that particular theory would be debunked as the ticket progressed. A draw in the Premier League clash between Newcastle and Brighton coupled with an away win for Inter in the Milan derby meant that, as Saturday drew to a close, the player had predicted nine winning legs having cashed out after seven.

Sunday afternoon brought a further five legs, three in Serie A and another two in the Premier League. The player had originally selected Sassuolo, Roma and Sampdoria to win, predictions which all, unfortunately, came to fruition.

The player had gone for a draw in the Crystal Palace vs. Wolves match and it looked for all the world as though Palace would come to the rescue and scupper the ticket when they went ahead against the struggling midlanders, who were subsequently reduced to ten men. However, when a comedy of Palace errors allowed Diego Jota to equalise in the 95th minute, things suddenly looked ominous once again.

Liverpool made no mistake dispatching Chelsea 2-1 in the next leg, despite not playing particularly well, which meant that the fate of the ticket would rest on Real Madrid winning their away fixture against Sevilla that evening.

With just 0.07 units remaining in the pool and 14 winnings legs on the ticket, had the player refrained from their premature Cash Out they would certainly have been made several far bigger offers. However, if Sevilla could avoid losing to Real, then at least they would be spared the realisation that they had sold the perfect ticket for far less than it was worth.

Sevilla enjoyed the majority of possession and shots in a goaless first half. Unfortunately though, Karim Benzema found the net in the 64th minute with what proved to be the only goal of the game, confirming that the player would not be offered any sort of reprieve. Indeed, the ticket would have been worth an incredible £58,400 had they resisted the urge to Cash Out so early.

In what proved to be an extremely unfortunate story, the central lesson seems to be that leaving at least a small portion of your ticket alive when Cashing Out is surely prudent for rare circumstances like this.