Greyhound expert and tipster Cheltmental continued his rich vein of form on Wednesday when his Syndicate netted a very nice return in the £50,000 Harlow Win 8, which he had previewed on the Colossus blog.

In the first race, the 18:33, he tipped three dogs to help the ticket get off to a winning start, including the favourite, Marvellous Blaze. He wrote; “He is a quick dog and, if he can come away better than he has done, he’ll be the one to beat.”

And so it proved as Marvellous Blaze romped to victory in the opener.

Things went just as well in the 18:49 when Ten Lengths, who Cheltmental described as ‘a major player’ in his write up, also took the spoils. 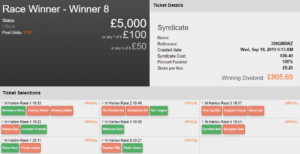 Unfortunately, though, the 19:07 broke the winning sequence. Anticipating a tricky heat, he had once again picked three dogs but unfortunately none of them were able to pip the eventual winner, Automatic Stay, to victory.

Although the big jackpot was no longer in reach, Cheltmental had claimed Consolation Prizes in each of his previous two tipping articles so knew well that a few more winners could still net his Syndicate significant profit.

Sure enough, he was immediately back to winning ways as American Pharoah claimed a win in the 19:23. Then came the 19:38 and, with it, his nap of the night.

The dog was Millmount Duke and Cheltmental had specifically requested that he be mentioned in the blog’s headline. In fact, so confident was he of  Millmount’s victory, that it was the only heat in which he made just one selection.

He wrote; “American Pharoah might only be an A5 dog but he looks likely to be on the premises round the first bend and, on the clock, has a couple of lengths advantage on most of the field.”

They proved to be prophetic words and, sure enough, a confident victory gave the Syndicate their fourth win in five races.

Barnfield Moll and Fancy Kerry obliged in the 19:54 and 20:11 heats respectively and, sudden 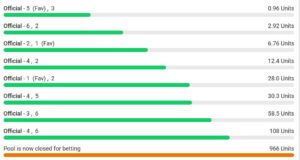 ly, they arrived at the eighth and final leg with a chance of getting seven winnners and, as a result, some tasty Consolation money.

In fact they had two chances as Cheltmental had picked Beginish Billy and Ghetto Queen in the last. He wrote of the pair; “Timewise, they are the most likely winners with little traffic, so they make the cut with the hope that they don’t come to blows at the first.”

They certainly didn’t come to blows and, as Ghetto Queen crossed the line in first place ahead of Beginish Billy, the Syndicate were rewarded with £805 to show for their efforts, despite playing for just 20p a line!

It was another top performance from Cheltmental who is undoubtedly coming ever closer to nailing a Win 8 and taking home some serious cash. Be sure to keep following his articles.