With 16x £0.20 lines on their ticket, the player had two selections in each of the four legs and was playing for £3,000 of the total jackpot prize.

Everton vs. Man City served as the opening leg late on Saturday afternoon and the player had gone for 3-1 to the away side as well as Any Other Draw, which required any draw featuring four or more total goals.

With the sides level at 1-1 in half-time, both options were still on the table but City’s supremacy eventually paid off and late goals from Riyad Mahrez and Raheem Sterling got the ticket off to a flying start.

The second leg, in La Liga, saw Granada host Leganes. Predicting an entirely different kind of match to the first leg, they covered 1-0 to Granada as well as the 0-0.

In the 28th minute an Antonio Puertas strike for Granada ruled out the goalless draw option but the possibility of a single goal victory was still very much alive. The match was evenly poised and, despite Leganes looking for a late equaliser, it wasn’t forthcoming and the scoreline stayed the same.

The player couldn’t pick between Atletico and Real in the Madrid derby on Saturday evening, which served as the third leg, so backed the 0-0 in addition to the Any Other Draw option.

It certainly didn’t prove to be a classic and, despite Real Madrid edging the possession and chances, neither side could find the net. It ended 0-0 and the player was into the last 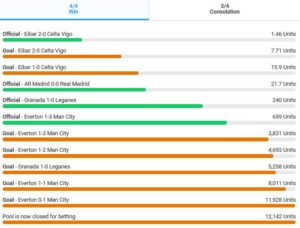 The three opening legs had bamboozled the vast majority of players, with the 12,142 initial units which had entered the pool whittled down to just 21 with a leg remaining on Sunday.

Eibar vs. Celta Vigo would decide the fate of the ticket. Having selected either a 2-0 Eibar victory or Any Other Away win, effectively Celta Vigo to win and score four or more goals, they player seemed confident that whoever won it would do so emphatically.

It proved to be the home side who would take the lead, with the exotically named Edu Expósito finding the net just after half time.

A single goal stood between the player and four winning legs. Cometh the hour, cometh Fabian Orellana. The Chilean winger doubled their lead in the 60th minute and, with Eibar able to hold on, the ticket was a winner.

The player had netted £2,089 for their efforts, a 652x increase on their original stake. Bravo!