One Betway Ghana player scooped the equivalent of £104k from two tickets in last weekend’s Pick 15! With both of his tickets through to the final leg of the pool, he decided to accept 100% of his £22,455 Cash Out offer on one ticket and leave the second ticket in the run in for a share of the jackpot!

Sailing through Serie A

Having successfully navigated himself through the first 11 legs on a one line ticket, our lucky punter needed Roma to beat Torino. After 88 minutes, the match looked destined to finish stale mate. But a spectacular 89th minute winner from Edin Dzeko kept the punter alive in the Pick 15.

Next up was Parma vs Udinese. A match our punter predicted would finish level. When Parma scored for a second time to give themselves a two goal advantage, his tickets were looking to be heading out of the pool. Incredibly, though, Udinese nicked two goals within four minutes of each other and the match finished 2-2.

He had made it through to the final leg of our Pick 15, with a one line ticket!

The final leg came from La Liga, as Valencia hosted Atletico Madrid. A draw and our punter would be in for a share of that Pick 15 jackpot!

Atletico took the lead through Angel Correa in the 26th minute but were pegged back by Rodrigo Moreno in the second half. As the final whistle brought the match to a close, the 1-1 draw meant that our punter had done it! He’d made his way through the Pick 15 pool with a one line ticket, landing a £82,010 dividend in the process! 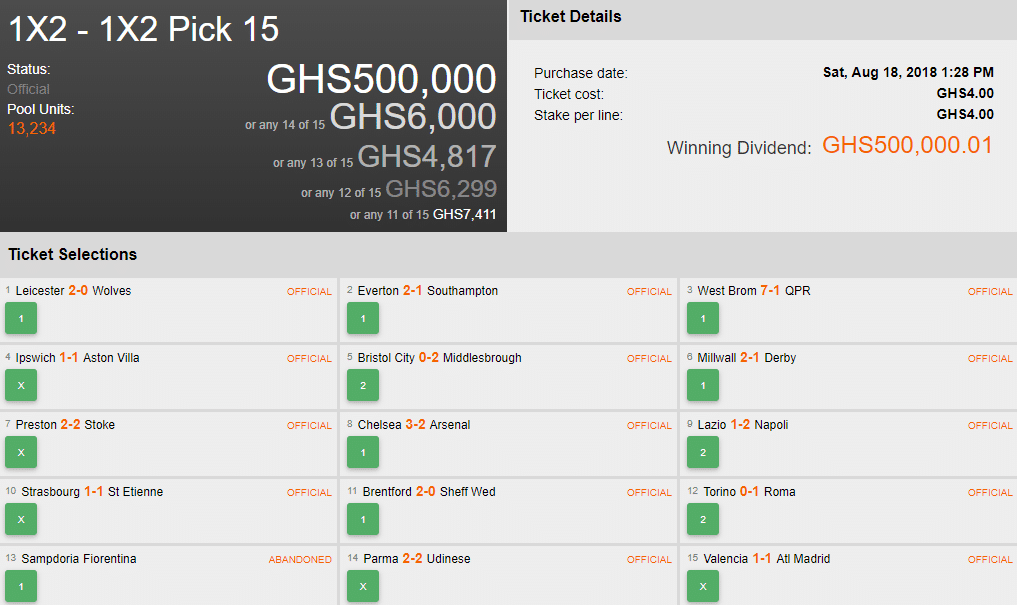