There were unbelievable scenes in the 1X2 Rollover Pick 8 over at the weekend, as one player converted a £1 ticket into an astonishing four-figure win.

The Rollover pool, featuring games from the Belarusian Premier League, had reached £40,868 with 29,398 units entered as the first leg got underway on Friday afternoon.

In the opening leg the player selected an Energetik-BGU away win and would have been happy to see them take a 2-1 half-time lead against FC Slutsk. Unfortunately they were reduced to ten men in the second half but held on for the win.

A 1-1 draw between FC Gorodeya and FC Minsk made it 2/2 after an opening day in which just over 20,000 of the initial units had already crashed out.

The action continued on Saturday and it was very much a case of Groundhog Day as the player correctly selected a draw (Slavia Mozyr vs. Zhodino) and an away win (Neman vs. Rukh Brest) which successfully won despite the away side receiving a red card.

With half of the legs completed, just 230 units of the initial 29.398 were still standing but the player was still sitting pretty, albeit only playing for 50% of the jackpot as they had only played £1 per line.

The remaining four matches took place consecutively on Sunday. First up the player predicted a home win for FK Isloch Minsk over FC Belshina Bobruisk, which came to fruition in a 2-1 win.

Next was FC Vitebsk vs. FC Shakhtyor Soligorsk and the player needed a draw. The match petered out into a 0-0 stalemate, meaning six legs were in the bag. With just 37.4 units still standing, things were getting serious. However, they resisted any Cash Out offer and persevered. 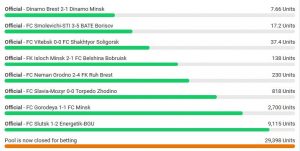 If proved a shrewd choice as, in the penultimate leg, the player had predicted that Belarusian ‘giants’ BATE Borisov would win away to FC Smolevichi-STI.

BATE raced into a 3-1 lead at half-time but Smolevichi pulled two back after the break to make things level. With time running out, would an upset scupper the ticket? Not a chance. Two goals in the final ten minutes saw BATE emerge as 5-3 winners from a thrilling contest to take the spoils and progress the ticket to a final leg.

That final leg would see Dinamo Brest host Dinamo Minsk and, after once again refusing to Cash Out, nothing but a home win would suffice for the player.

A fifth minute own goal saw Brest take the lead but they were pegged back in the 24th minute to make it 1-1. Shortly after half-time they took the lead once again and the player was in pole position to land a huge win. Sure enough there were no more goals and they had done it!