In a strange time for the world of football, and indeed the world at large, the vast majority of global leagues are currently suspended until further notice. The one notable exception in recent weeks has been the Belarusian Premier League which has deviated from the pack and is operating like normal. One Sportna player capitalised on this over Easter weekend by securing a huge four figure win from a tiny stake in the €34,792 Rollover Pick 8, which featured eight matches from the Belarusian Premier League.

The four line ticket got underway at 17:00 on Friday as  FC Neman Grodno hosted FC Belshina Bobruisk. The player had opted for a home win or a draw to improve their chances of getting off to a good start. Despite taking an early lead, Grodno were pulled back to a 1-1 draw. The result immediately decimated the pool, with just 6,746 of the 23,611 starting units still standing.

Saturday brought the next three legs of the pool with the player opting for a draw in the early fixture, FC Slutsk vs. FC Vitesbk, which also finished 1-1, in addition to home wins in Torpedo Zhodino vs. Energetik-BGU and FC Gorodeya vs. Dinamo Minsk, both of which also came in.

Halfway through the pool, the player was one of very few people who had managed to successfully predict the first four Belarusian Premier League results correctly. Indeed, there were now only 154 units remaining and the player was in possession of two of them, meaning that their hopes of a huge win were very much alive.

Understandably the player had plumped for a BATE Borisov away win against FC Minsk and wasn’t disappointed as the defending Belarusian Premier League champions romped to a comfortable 0-3 victory. A draw between Smolevichi and Shakhtyor Soligorsk, as well as a home win for Dinamo Brest, added a further two winning legs to give the player a fantastic seven out of seven going into the finale. 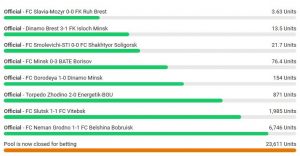 The eighth and final leg took place on Monday afternoon and only 13.5 legs were still standing. The player had banked two selection in the fixture, FC Slavia-Mozyr vs. FK Ruh Brest, meaning that only an away win would scupper their chances of an extremely tasty return.

An evenly-matched opening 45 minutes past by without a goal but the player was handed a huge boost in the 62nd minute Ruh Brest’s Senegalese striker Abdoulaye Diallo was sent off, significantly denting their attacking capabilities.

Sure enough, they weren’t able to muster a goal and, with the match eventually petering out to a 0-0 draw, the player had overcome the Belarusian Premier League Win 8 pool.