The FA Cup isn’t being done too many favours by the Premier League fixture list this season.

I’m well aware that it is far from their fault, but the fact that there is a full league schedule next Tuesday and Wednesday must impact upon team selection in the Cup this weekend.

I personally think it shouldn’t and teams should play their best available XIs, but then again I’m not a manager who has European qualification or relegation – and his job – to worry about!

Their 2-1 win at Southampton in this competition aside, Crystal Palace are in a very poor run of form, and Saturday’s 3-1 loss at home to Tottenham was their fourth league defeat in a row, and they only drew the previous two 0-0.

The only saving grace for them is that Stoke have been not been in the greatest form of late as well, and are suffering from injuries, with the fact that Ryan Shawcross is now out for a month with a back injury a particularly cruel blow for them.

And losing 6-5 on penalties to Liverpool in the Capital One Cup semi-final on Tuesday night won’t have helped morale.

This looks a difficult game to call in the circumstances – Palace won 2-1 at the Britannia in the league but are poor at home – so I will go 1-1.

Nottingham Forest are only in mid-table in the Championship but they have a decent home record for a side sitting in 11th – only three defeats in 14 games – and they are unbeaten in their 13 games after drawing 0-0 with QPR on Tuesday night.

So Watford, fresh from a much-needed 2-1 win over Newcastle at the weekend, will certainly not have it all their own way against an in-form side.

I think there could be a mini-shock in the Portsmouth v Bournemouth game, as I think the Premier League side will have one eye on their league game at Palace on Tuesday night.

And League Two side Portsmouth do have a decent home record, for all that they lost 1-0 to Oxford in front of their own fans at the weekend.

I fancy goals here, and an Any Other Draw (AOD) score line. 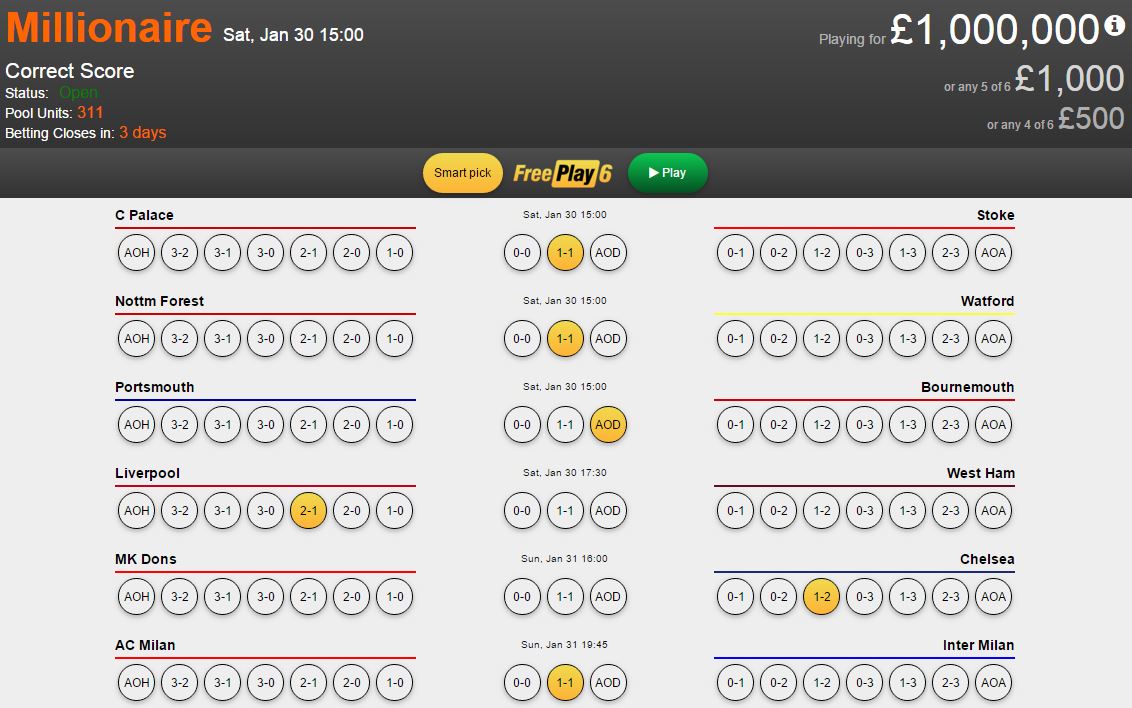 I’m not sure that Liverpool would have been too happy to concede four goals at Norwich on Saturday, but Jurgen Klopp certainly looked a contented man when his side scored their fifth in injury time!

They need to build on that win now – far too often they have followed up good wins with mediocre performances – and hopefully Klopp will put out a stronger side than he did when they beat Exeter 3-0 in the last round.

They will need to, as even though they made it through to the Capital One Cup final on Tuesday night, the fact is they lost 1-0 at home in 90 minutes to Stoke.

West Ham have already done the double over Liverpool this season by an aggregrate of 5-0, and are a place and two points above them in in the league too, but I just favour the home side 2-1.

Chelsea rode their luck a fair bit in beating 10-man Arsenal 1-0 on Sunday and have not been convincing for a while, but they are now undefeated in their last eight games, and they can win 2-1 at MK Dons.

MK Dons can throw in some stinkers – such as when beaten 5-0 at home to Burnley – and are struggling in the Championship.

That suggests they will struggle against Chelsea here and, even though they will undoubtedly raise their game, I think a narrow defeat is the percentage call here.

Inter and AC obviously share a ground in Milan, and both have very similar home records in Serie A this season.

These matches are invariably very tight and low-scoring affairs – indeed none of the last eight meetings has seen more than two goals scored – so I’ll opt for 1-1.