Colossus Captain BetBoss and their Syndicate celebrated the return of the Premier League in fine style over the weekend by landed a fantastic four-figure win in the £34,426 Rollover Pick 8 pool.

The Syndicate had covered their bases by backing multiple options in the early legs which proved to be an extremely shrewd call as shocks were on the cards.

First up came Spurs vs. United who shared the spoils after Eric Dier gave away a penalty by fouling Paul Pogba in the box. 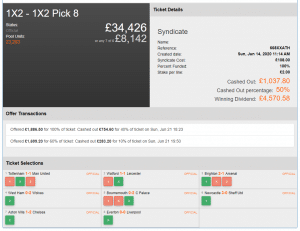 Next was Watford vs. Leicester, in which the only result BetBoss didn’t want was a Leicester win. However when Ben Chilwell put The Foxes ahead in the 90th minute it seemed as though that was the likely outcome. Craig Dawson was having none of it though and struck an equaliser deep into injury time to salvage another 1-1 draw.

The third leg saw calamitous Arsenal embarrassed for the second time in a matter of days as they managed to snatch defeat from the jaws of victory away to Brighton, who came from behind to secure a 2-1 win.

Just three legs in and the surprising results had decimated the pool, with 23,263 units reduced to 512, a 97% decrease.

BetBoss was still going strong though and the Syndicate were in a fantastic position at the end of play on Saturday as Wolves and Palace secured 2-0 away wins over the relegation-threatened pair of West Ham and Bournemouth.

The final three legs arrived on Sunday and the Syndicate needed Newcastle to beat Sheffield United in the opener. They would have been overjoyed to see John Egan sent off for The Blades in the 50th minute, with Newcastle taking advantage of their numerical advantage and strolling to a comfortable 3-0 win.

Next up was Aston Villa vs. Chelsea and The Blues helped the Syndicate to progress to the final leg by overcoming a surprise Villa opening go 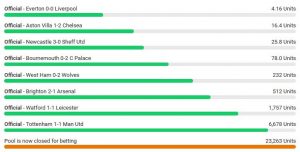 The deciding leg was the Merseyside Derby and BetBoss had gone against the grain by backing a draw. However, with a tempting £1,886 Cash Out offer on the table they decided to bank £754 for 40% of their ticket before kick off, securing them a healthy profit.

So many of the games since Project Restart have been 0-0 at half-time and this was no exception, leading to an improved Cash Out offer. BetBoss decided to bank a further £283 for 10% of the ticket, meaning the Syndicate had over a grand in the bank with half of the ticket still alive.

They needed have bothered though as the match ended as a drab goalless draw and the ticket was a winner. In total the Syndicate landed £4,570.58 from the £108 ticket, a fantastic 42x return on their initial investment. Well done to all involved.