Colossus Captain and regular big pool winner ‘im the bkpool tower’ (ITBT) guided his 47-person Syndicate to an enormous win in the £800,000 1X2 Pick 15 pool over the weekend. The group joined together to fund a £194 ticket but, opting to play for £0.20 per line, they would be challenging for a reduced jackpot total of £80,000.

It was FA Cup weekend and the 11,083 units hoping to overcome the pool saw the action get underway at 15:00 on Saturday afternoon, as the opening four games kicked off.

The Syndicate had covered every selection in three of the legs and just needed Swansea to oblige with a win against Nottingham Forest to progress, which the Welsh side did in style, emerging as 5-1 winners.

There were then three Saturday evening games which the Syndicate also sailed through, thanks to a resounding 3-0 win for Atalanta, away to Serie A leaders AC Milan, and victories for Monaco and Aston Villa in the only Premier League clash of the weekend. 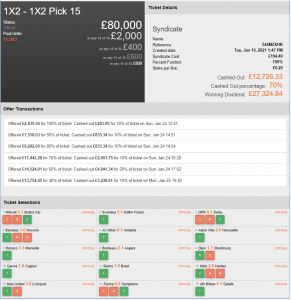 That signalled the end of a first day of action which, owing to some surprise results, had decimated the number of units still active in the pool. In fact, all but eight of the initial 11,000+ had already been eliminated, meaning that some tempting Cash Out offers would be inevitable should those remaining units stay alive.

ITBT resisted all offers until half-time in the Sunday’s opening leg, Bordeaux vs. Angers, in which the Syndicate required a home win. Despite a tremendous start with two early goals from Bordeaux, the away side nicked one back before half-time. Wary of a potential comeback, ITBT took 10% of a £2,839 Cash Out offer, which netted the Syndicate £283. It was enough to cover the initial stake, meaning that the worst case scenario would be a very small profit.

Bordeaux hung on for the win, however, and attention then shifted to a pivotal quadruple of games at 14:00, with three Ligue Un encounters and one from Serie A. The Syndicate had covered multiple selections in the later legs of the pool, meaning that this daunting foursome of matches looked the greatest hurdle between them and larger offers.

They required home wins in Genoa vs. Cagliari and Reims vs. Brest, while a draw or away win in Dijon vs. Strasbourg would be sufficient. Total selection coverage in Metz vs. Nantes meant that they wouldn’t need to worry about that one.

An extremely positive first half saw Genoa and Reims carry single goal leads into the break, while Dijon vs. Strasbourg remained goalless. Reflecting the Syndicate’s extremely positive progress, ITBT received a £7,518 Cash Out offer and opted to sell a further 20% of the ticket, locking in an additional £1,670.

Each of the contributors would surely have been thrilled when the results stayed the same at full time. With just three legs remaining in the pool, the next offer reflected the tremendous position which they now found themselves in. In fact, they had five of the six possible selections in the next two legs covered and were rewarded with a huge offer of £17,442 for the remaining 70% of the ticket.

Banking a further 10%, or £2,491, took their running total to £4,444 and a draw in the next leg, the Northwest Derby, was the only result which could scupper their chances of progression to the final game of the pool. If they could just avoid that draw, how much better would things get?

sold 30% so far. dont want a draw on the man utd game next @1GNASHERS @ColossusBets Syndicate What should we do? #WeWinTogether https://t.co/Q66oD8d48A

They wouldn’t have to wait long to find out, with the match getting underway at 17:00. An early goal for Mo Salah dispelled fears that the match would be a repeat of the drab goalless draw which the pair had played out the previous weekend. However, Mason Greenwood would strike back for United to level things up before half-time.

Despite the scoreline remaining unnervingly close at the break, a huge offer of £14,524 landed. Perhaps fearing that the two Premier League giants would cancel one another out again, ITBT cashed out a further 20% of the ticket, adding another £4,841 to the already staggering total.

In a topsy turvy second half, Manchester United took the lead through Marcus Rashford, before Mo Salah netted his second goal to make it 2-2. Time was running out and it seemed as though the Syndicate’s incredible run could end. However, Bruno Fernandes was arguably the Premier League’s finest player in 2020 and proved just why by curling in a free kick from the edge of the box in the 78th minute to settle the tie in United’s favour.

It meant that the Syndicate landed the win they needed to progress to the 14th leg, in which they had all three results covered, and therefore was effectively a bye to the the decider, Athletic Bilbao vs. Getafe. Taking place on Monday night, ITBT and his followers would be cheering on the home side in the La Liga clash. What would they do?

What would YOU do? 🧐

Having added a further £3,438 to their Cash Out total prior to kick off, the Syndicate already had £12,726 secured meaning that the pressure was off and, whatever happened, they would be celebrating. However, with 30% of the ticket still alive, there was still a huge sum of money to play for.

The match got off to the worst possible start, however, as the away side took the lead in the opening seconds of the game. Bilbao equalised in the 13th minute but the celebrations were short lived when Getafe were awarded a penalty, which they promptly missed. Any nerves on show in that precarious first half would soon be laid to rest, however, as Bilbao ran riot in the second period.

The Basque side went ahead in the 50th minute before adding a further three goals to their tally and running out 5-1 winners. What was anyone worried about? Even Bilbao supporters won’t have celebrated their win as vigorously as the 47 contributors to the ‘im the bkpool tower’ Syndicate, however, who had sensationally triumphed over the pool, landing an additional £27,324 in the process!

In total, the Syndicate landed a remarkable £40,049 for their £194 investment, meaning that each contributor would be able to enjoy a 206x return on their initial stake. Having put down a significant early benchmark for the most impressive Colossus win of 2021, congratulations must go out to all involved on a sensational Syndicate win.

What a buzz!!!!!!!!!! Thank you to everyone who bought shares in this and my other tickets with @ColossusBets A great way to get involved in pools betting! #WeWinTogether https://t.co/etXTrGyLDk