Weekly Winners (including a huge win from a FreePlay!)

This week, we start with an ambitious one-liner in The Colossus that was playing for the full €5,000,000! After correctly predicting the first two legs, the ticket then tailed off and missed each of the next three. At this point, hope of any return for the customer was fading fast, but a win in leg 6 followed by a Marseille comeback after going 1-0 down to a Balotelli goal secured the lions share of the 4/7 Consolation prize.

The last day of the Championship regular season allowed Sunday’s Pick 8 to kick off with five concurrent legs. Among those were crucial games for both Fulham and Cardiff who were battling for the last automatic promotion place. This solo punter correctly predicted that neither team would win their respective fixtures. After the Championship games had finished, only 25.6 Units were left with 3 remaining legs. The £4 ticket – playing for the full £10,000 prize – went on to share the Jackpot between 2.19 Units and landed £4,637! Huge!

The weekend’s all-Premier League Pick 4 threw up a surprising 1-0 defeat for Spurs at the hands of resurgent West Bromwich Albion. One punter saw the potential for this upset and had included the scoreline in their ticket alongside two draw selections and one Spurs win. The lucky punter will have been in seventh heaven when Everton grabbed a last-gasp equaliser against Southampton to see their ticket win a pool that was eventually shared among 1.6 units.

This should act as a reminder to all to always place your FreePlay tickets when they are available. Returning to Colossus after a seven month hiatus, ManVsBookie had some Flexible Freeplay tokens in his account. He placed one of them into a Correct Score Pick 4 that kicked off last Thursday with the Europa League matches and managed to navigate both successfully. More impressively, though, is that he got Brighton’s 1-0 victory against Man Utd bang-on-the-money! The 232 remaining units prior to kick off in Brighton v Man Utd was whittled down to 15.3 after the shock result. ManVsBookie was still alive! Finally, he had Crystal Palace to win 2-1 away at Stoke and will have been elated to see Palace turn the game around after going 1-0 down in the first half. £4,285 from a FreePlay. How’s that!

Another reminder that Consolations shouldn’t be taken lightly

The below punter’s ticket in the Pick 15 amassed 13 correct selections in which the pot was shared between 2.33 units. Their leg 4 selection was extremely unlucky as Deportivo netted an injury 91st minute equaliser to prevent the ticket from going 14 legs without blemish (to think of the offer that might have been at that stage….). Nevertheless, their superb £8 effort was rewarded with a return of £1,301. 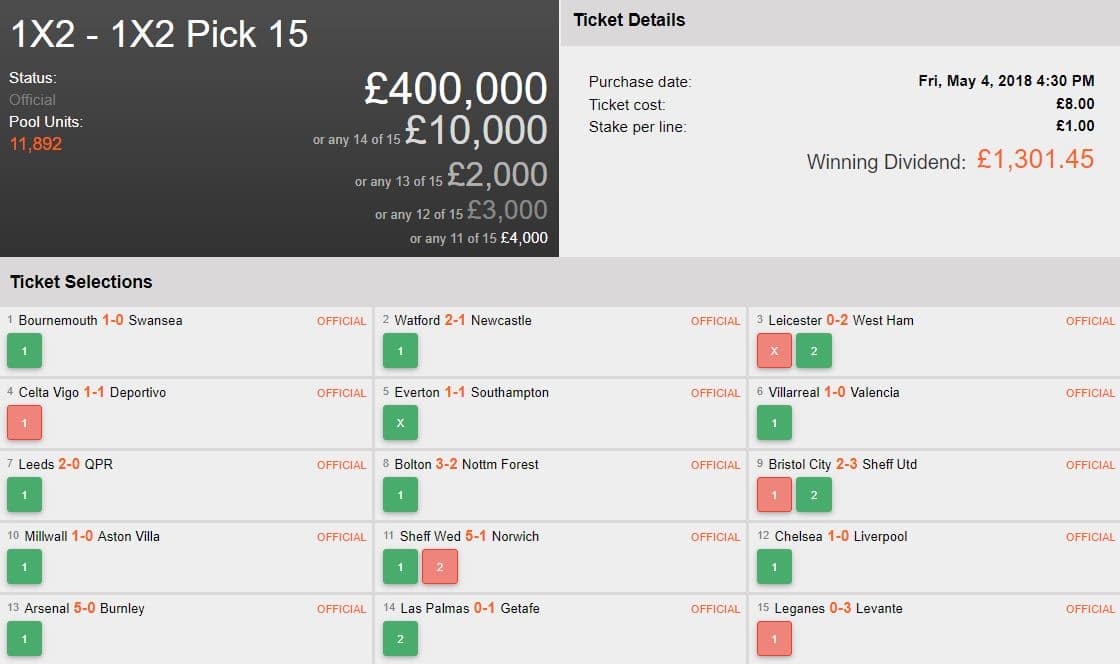 Weekly Winners
Colossus Winners: BBtipster closing in on the Pick 15