How weather caused one of the craziest football matches in history

How weather caused one of the craziest football matches in history

Storm Dennis is here and sporting events across the country are being cancelled. Once upon a time though, they went ahead regardless of the weather and, on one occasion, a football match played in heavy fog became one of the most shambolic sporting events in history.

It was 1945 and, months after the conclusion of the Second World War, the British public were hugely excited to learn that the famous Dynamo Moscow would be playing a series of high-profile friendlies across Britain, challenging Chelsea, Cardiff, Arsenal and Rangers. 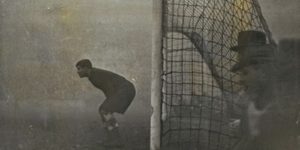 The Sunday Express were less starstruck, however, and snootily reported;

“They are not nearly good enough to play our class of professional teams. Their players are simply a set of very earnest amateurs. I say this confidently; in three hours’ football they look an ordinary lot.”

It soon transpired that the Russians were no pushovers though, playing out a 3-3 draw at Stamford Bridge in the opener in front of an estimated 90,000 fans, before obliterating Cardiff 10-1 in their second fixture.

Arsenal lay in wait next and Dynamo’s manager, Mikhail Yakushin, said; “To come to London and not play Arsenal would be like visiting Cairo without seeing the pyramids.” Unfortunately, on the day, a fog descended over London that was so thick it might well have taken a pyramid to breach it.

The match took place at White Hart Lane, home of Arsenal’s rivals Tottenham Hotspur, due to Highbury being used as an air-raid control centre. Alarms should have sounded for Arsenal as the fog worsened in the second half and, with the Moscow side trailing 3-2, the Russian referee ordered both of the English linesman to patrol the opposite end of the pitch to the half that he was martialling. Soon enough the Russians drew level, the referee allowing a blatantly offside goal to stand. 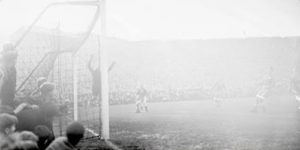 Arsenal’s captain, Cliff Bastin, later said “So long as the Dynamos got the ball in the net, even if they carried it there, the referee was going to award them a goal.”

Things deteriorated further when Dynamo made a substitution but, assuming the referee would be visually hindered or perhaps deliberately turning a blind eye, they never actually removed anybody from the pitch. Several fans in the stadium that day reported seeing as many as 15 players on the pitch for the Russians at once.

In response to the blatant Soviet cheating, the English side began sticking the boot into their opposition with the kind of gusto usually reserved for a Sunderland kebab shop at 3am on a Sunday morning. One Arsenal player eventually took it too far and was issued with a red card, only to sneak back onto the pitch minutes later.

If the scenes unfolding weren’t ludicrous enough, Arsenal were met with further misfortune when their goalkeeper ran into his own goalpost knocking himself unconscious. With no substitute keeper on the bench, a supporter was plucked from the crowd to replace him before the match continued.

Dynamo eventually ran out 4-3 winners but the result was of secondary importance to the crazy events that were a direct consequence of the weather. With modern footballers donning gloves at the first sign of a chill, things have certainly changed.