The incredible player turnover at Premier League clubs. Football is a ruthless business; whether this is for the good or bad of the sport is open to discussion, but it’s undoubtedly the nature of today’s game. In an environment where long-term employment contracts can be disregarded for the right price and players can be enticed to pastures new by the lure of an increased salary and substantial bonuses, it’s unsurprising that staff turnover is high at the country’s biggest clubs.

Despite the fact that football fans are well aware that the continual signing and selling of players is integral to the running of any team, many will still be shocked at the vast quantity of footballers that have passed through the doors of their club during recent seasons.

During the 10 year period between 2003/13, Leicester City and Sunderland signed close to 150 players each, while clubs such as Tottenham, West Ham, QPR and Manchester City each saw over 100 new faces pull on the club’s jersey. Just take a look at the graph below, and it’s plain to see how cutthroat clubs can be with regard to the hiring and firing of its superstars.

So, in terms of job security, perhaps it’s better that you didn’t make it as a footballer after all. Every cloud. 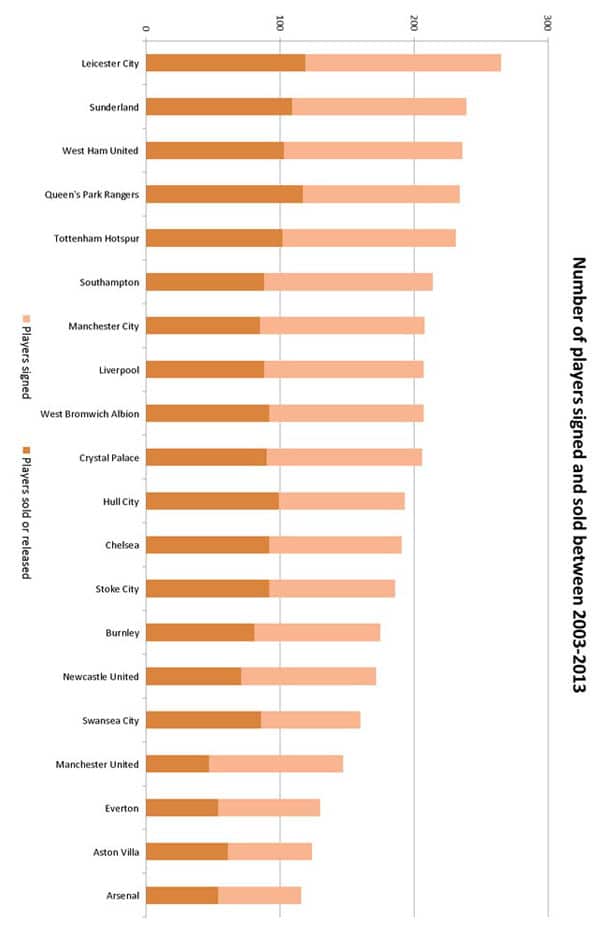 Get a World Cup player on your head!
The poorest England squad in recent memory?