It’s fair to say it has been a busy week or so here at Colossus HQ. On Monday night our Pick 20 Asian Handicap pool, closing with the Arsenal v West Brom game, gave AlbertTipster’s Syndicate a £10k winner AND a solo punter from Germany showed balls of steel in avoiding Cash Out offers throughout, landing a hefty €128k! Syndicate favourite Spidey Crane would soon follow the trend…

After the Tuesday games were secure, it all rested upon games that on paper were far from easy to call. Yes, PSG now have a formidable attack, but could they break down the ever-powerful Bayern? Atleti were the favourites at their new home, however they haven’t hit the ground running just yet.

Throughout last night’s fixtures it was as if the Syndicate never looked in doubt. PSG were dominating and all of Spidey Crane’s selections show that the player foresaw the nature of this game. He also felt the Atleti-Chelsea game would be tough to call.

It turns out both predictions were entirely correct, with PSG winning 3-0 as well as having AOH and 3-1 backed just in case. The Atleti-Chelsea game standing at 1-1 after 80 minutes looked odds on to finish that way. That wouldn’t have been the end of the world for both teams, but Spidey Crane also had a contingency plan with 2-1 either side, proving to be vital.

Total Syndicate winnings came in at a £10,321, with members earning over 140 x their original stake! 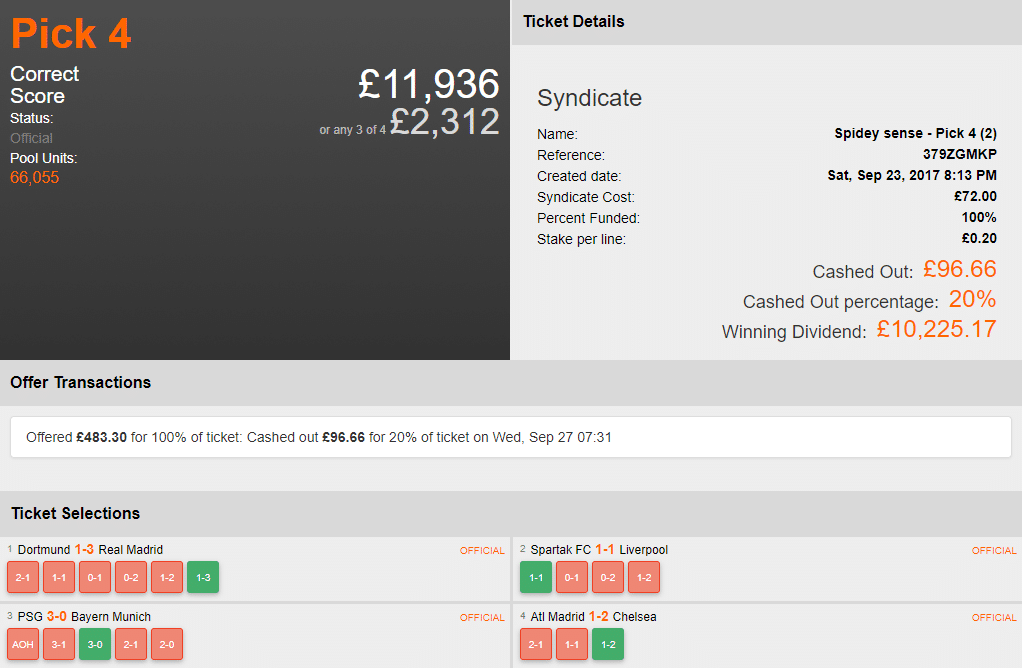 As well as the Syndicate winner, one Betfair solo player managed to take home £12,781! It was about as dramatic as it gets to win a pool, with the literal ‘last touch’ of the game from none other than The Batsman, the hero of the day, Michy Batshuayi.

In the 92nd minute Chelsea were given a free-kick in a dangerous position that was begging to be whipped in to the dangerous 6-yard area, but they passed sideways. After what seemed like 30 seconds of passing leading to nowhere, you saw a triangle forming starting and finishing with Alonso, who cut the ball back for a ready than ever Michy ‘The Batsman’ Batshuayi.

Are you ready for the next Super Syndicate?

They went oh so close in the Pick 4 rollover with a highly respectable 3/4 Correct Scores, whilst claiming £1,304 in Consolations/Cash Outs.