Following his extraordinary win in the £800,000 Pick 15 last month, Syndicate Captain ‘im the bkpool tower’ (ITBT) was at it again over the weekend. This time, however, he guided his Syndicate to an outrageous five-figure return from a losing ticket thanks to some perfectly times Cash Out decisions.

Once again taking on the Pick 15, the 59-person Syndicate cost £259 with a stake of £0.20 per line. ITBT had loaded the opening nine legs with multiple selections in a bid to get through Saturday unscathed and hopefully reach Sunday with some tempting Cash Out offers. The plan went off without a hitch.

The only leg on Saturday in which the Syndicate had selected just a single outcome was the late Premier League game in which Fulham hosted Sheffield United. ITBT had opted for the home side who eventually ran out 1-0 winners thanks to a second half strike from Ademola Lookman. However, the narrow victory barely told the story of Fulham’s domination in what was a fairly one-sided contest.

Less than a single unit of the initial 6,802 which began the pool remained at the end of the first day, which highlighted just how difficult the results had been to navigate. However, having covered all three selections in one of the Sunday’s opening legs, West Ham vs. Tottenham, the Syndicate only needed to worry about Montpellier beating Lens in Ligue Un. 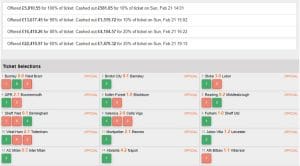 It proved to be another stress free leg though, fortunately, with La Paillade racing to a two-goal advantage before missing a penalty, in what eventually proved to be a comfortable 2-1 win.

With eleven legs out the way, the serious business and Cash Out offers would begin but, with the Syndicate having just a single selection in each of the remaining four legs, there was no margin for error.

Aston Villa vs. Leicester and AC Milan vs. Inter Milan began simultaneously at 14:00 but, with a £5,801 offer on the table, ITBT would Cash Out 10% of the ticket prior to kick off, guaranteeing that the contributors would, at least, double their money.

Having selected Leicester and Inter Milan to win, the Syndicate would surely have been delighted to see that Aston Villa’s talismanic captain Jack Grealish would miss the game. Leicester duly took advantage and wasted no time in racing to a two goal lead by half-time. With Inter Milan also enjoying a lead at the break, the mid-game Cash Out window saw an improved £13,667 offer arrive for the remaining 90% of the ticket. ITBT elected to sell a further 10%, which added another £1,519 to their total.

Fortunately, despite a second-half Villa fightback, The Foxes hung on for the win and Inter Milan powered to a 3-0 victory over their fierce rivals to put the Syndicate through to the final two legs. With their fortunes improved even further, yet another improved Cash Out offer arrived and this time £16,418 was on the table for the remaining 80% of the ticket. ITBT cashed out an additional 20%, which equated to £4,104, and took their running total to a massive £6,205 with two legs and Consolation Prizes still to come.

Captain @1GNASHERS is on a roll!

His team of 59 contributors now play for £48,000 heading into the penultimate leg 😲

The penultimate leg was another tantalising Serie A clash between free-scoring Atalanta and Napoli, with the Syndicate hoping for an Atalanta win. A drab, goalless opening period led to an unimproved half-time Cash Out opportunity so the Captain opted to keep faith with the home side and would soon be vindicated in his decision.

In fact, the second half could have been a different game as a six-goal thriller saw Atalanta eventually emerge as 4-2 winners. The jubilant celebrations in Bergamo would have been matched by the contributors to ITBT’s Syndicate who were through to the final leg of the Pick 15 and, accordingly, saw an enormous £22,410 Cash Out offer arrive for the remaining 60% of the Syndicate.

The Captain took another 20% which contributed a further £7,470 to their mounting tally and left with them 40% of the ticket riding onto the final game, Athletic Bilbao vs. Villarreal. A win for the home side would mean that ITBT had remarkably won the challenging Pick 15 pool for the second time in a month.

A poor start saw Villarreal take the lead in the 16th minute but the Syndicate were thrown a lifeline on the stroke of half-time when Bilbao equalised. Could they find a way through and net a sensational winner in the second half to scoop the pool?

Despite knocking on the Villarreal door with 18 attempts on goal, Bilbao couldn’t find a way through and the match finished 1-1. The Syndicate had fallen at the final hurdle.

However, on top of the money that they had already banked, they would land an additional £2,829 in Consolation Prizes taking their final total to an incredible £16,503, a 63x return on their stake for every contributor. What an incredible Cash Out story and another example of how you can win huge amounts at Colossus on losing tickets!

Amazing to be apart of this…was on the edge of my seat until the very end! Well done @1GNASHERS for producing another @ColossusBets insane ticket with amazing returns! £2.50 = £159.17 return! 🤑 pic.twitter.com/bqBFpZF7Jk