Our French Millionaire pool has provided another Colossus Cash Out success story. This customer came away with £44,667.88 from a £12 losing bet! We’ll review the tale of the ticket below… 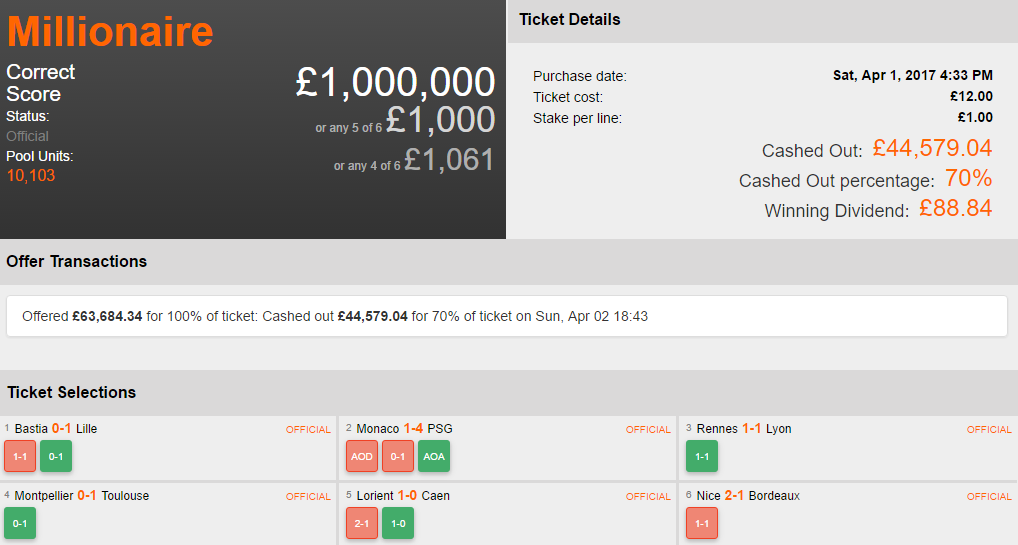 The pool got underway on Saturday evening, when Bastia faced Lille. Our customer envisaged a tight match, with 1-1 and a 1-0 away win the selections. When the teams entered the tunnel at half time with the score still 0-0, it seemed our customer’s prediction of a tight game were correct. Shortly after the break, the deadlock was broken as Lille took a 1-0 lead in the 48th minute. Despite having fourteen shots, Bastia could not find a way through and the match ended 0-1.

The first leg had been successfully navigated.

The second leg of this week’s French Millionaire was the clash between Monaco and PSG. Our customer saw goals in this one, with AOD and AOA selected and a 1-0 PSG win also covered.

It took only four minutes for the first goal to come in this one, Julian Draxler giving PSG a 1-0 lead. Lemar equalised for Monaco before Di Maria restored PSG’s lead just before the break. PSG frontman Edinson Cavani got involved in the goals after half time, scoring in the 54th minute to give PSG a 3-1 lead. Our customer needed more goals. The wait was agonising and went on until the 90th minute, until Cavani made it 4-1 to PSG. The AOA selection had come in.

For leg three, our customer had 1-1 as his sole selection. Clearly confident in the 1-1 draw, he resisted his Cash Out offer.

But after five minutes, he must have been fearing the worst when Rennes were reduced to ten men. It took Lyon until the 52nd minute to make the breakthrough and the game looked to be comfortably in Lyon’s hands. Through stubborn defending, Rennes found themselves still in the game. When Mubele equalised for the home side in the 81st minute, this customer must have been overjoyed!

Both sides had opportunities to win it towards the end, but the match finished 1-1.

Leg four was Montepellier vs Toulouse. This customer had 0-1 as a sole selection, clearly confident again in the result. Andy Delort gave the away side a 1-0 lead in the 45th minute and left our customer wanting no more action in the game. The sides duly obliged as the match finished 0-1.

The penultimate leg of our French Millionaire pool also ran at 4pm on Sunday. He predicted a one goal home win, selecting 1-0 and 2-1. In the 29th minute, the ticket got off to a flyer with Lorient taking the lead through Benjamin Moukandjo. But Lorient were reduced to ten men in the 49th minute, causing a few nerves! They clung onto their one goal lead to come away with a 1-0 victory.

Our customer had made it to the final leg of the pool! He was the last remaining unit and was within touching distance of the jackpot!

The Cash Out offer was £63,684 for the £12 ticket, with the final leg having 1-1 as the sole selection. The pressure built on the decision whether to Cash Out or not.

His decision was to Cash Out 70% of the ticket for a mouth-watering £44,579 and have 30% still playing in the final leg of the pool! Now it was time to wait and see if his decision was the right one…

Balotelli equalised from the spot for Nice and the game was now level. He needed no more goals in the game, and it was only the 16th minute! When Eysseric scored only eleven minutes later for Nice, our customer’s selection had lost. The decision to Cash Out 70% of the ticket, proving to be a wise one.

Our French Millionaire pool has consolation prizes for nearly winning the pool. The 30% of the ticket which the customer had still playing the pool won a dividend of the £1,000 prize for five out of six correct selections. This took the total winnings to £44,667.88!

The customer Cashed Out at the perfect time and proved himself to be quite the psychic! Well played sir!

Could you be our next Colossus Winner?

You can get involved in the Ligue 1 Millionaire HERE