Diego Simeone’s men have lost just once in their last 10 La Liga matches, winning seven of those. Three of Sporting Gijon’s four wins have come against their fellow strugglers and it is hard to look past an Atletico victory here first up in my Pick 15.

It is time for Leicester to focus on two things: avoiding relegation and enjoying their time in the Champions League. Millwall, notoriously difficult to beat at The Den, can take advantage of their struggles this weekend; a home win or draw looks safe.

Brighton have gone through a slight blip in recent weeks but I still fancy the Seagulls to come up trumps at Oakwell. Barnsley have won just once at home since Boxing Day and Chris Hughton’s men will be confident of picking up all three points.

Three defeats in six Championship games isn’t enough to tempt me away from Leeds United right now and I’m backing Garry Monk to get the better of Mick McCarthy here. Ipswich are inconsistent at best and the Whites could come out on top if they find their best form.

A simple choice. Wednesday, currently sixth in the table, have won three on the spin whilst Forest are still looking nervously over their shoulder at the relegation battle. Gary Brazil has had a positive impact at the City Ground but the visitors should be too strong…

Preston have won two in a row but Wigan are much improved under Warren Joyce and I fancy the Latics to build on Tuesday’s last-gasp win at Wolves. The visitors will be tough to beat; hence why I’ve gone with the insurance policy of a draw.

Birmingham haven’t won many games at home but they rarely get beat and I’ll be backing the Blues to secure a second successive victory at St Andrew’s. QPR’s winning run is well and truly over and the hosts can pile more misery onto the London side.

The Bundesliga table suggests that Freiburg could run away with this one but Hamburg have shown signs of improvement in recent times. Last week’s victory over RB Leipzig will give the hosts confidence and a draw could be on the cards in a tight-knit affair. 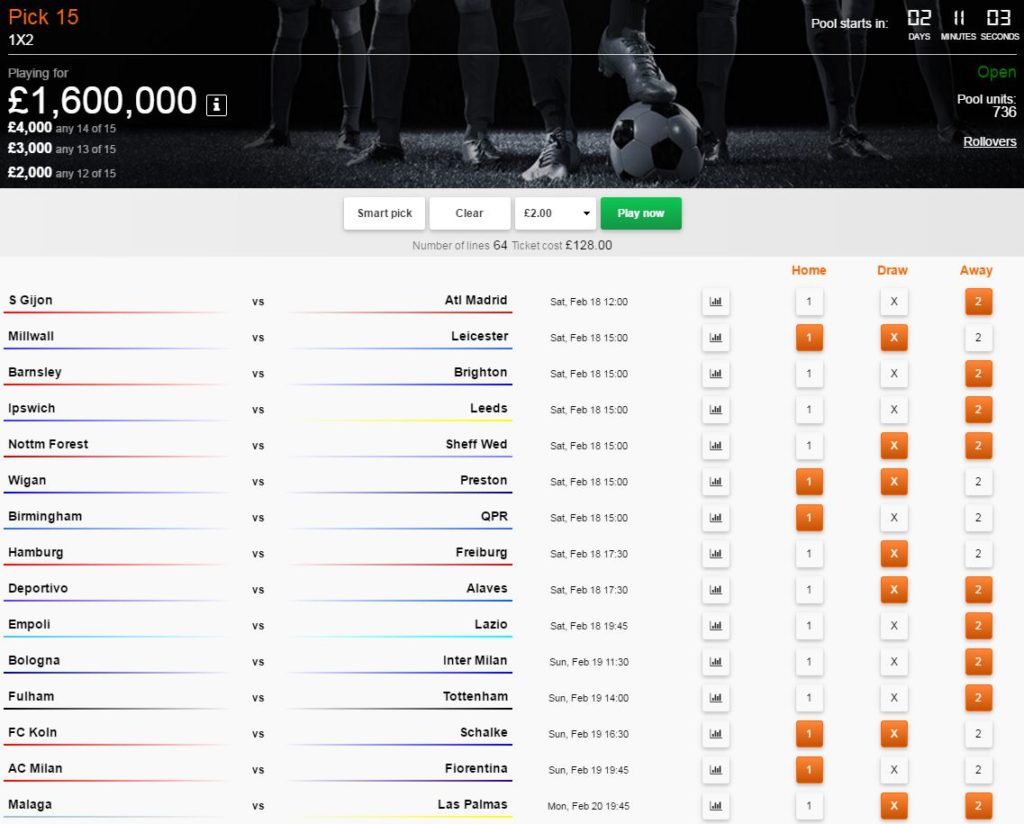 Another tricky one to call. Deportivo have the capacity to produce a quality performance from time to time but the visitors are probably more consistent. Alaves were thrashed 6-0 by Barcelona last time out but I fancy them to pick up a positive result here.

Lazio are one of Italy’s in-form sides and it would be foolish to back against the visitors right now. Empoli rarely lose at home but Lazio will be chomping at the bit as they look to close the gap in the hunt for the European spots.

Inter have won eight of their last nine Serie A fixtures and it is hard to look past the visitors in this clash. Bologna have lost three of the last four against Inter and the Italian giants will be quietly confident of picking up another victory on Sunday afternoon.

You never know what you’re going to get with Spurs and the FA Cup but it is still difficult to back against the Premier League outfit right now. Fulham are decent at home but Mauricio Pochettino’s men are on another level; this one could be fairly comfortable.

The hosts have lost just once in seven league games and four victories in the last six against Schalke is enough for me to side with Koln. You could argue that Schalke have more talent on paper but football matches aren’t won on paper – I’m backing a home win or draw.

Milan aren’t the dominant force that they were a decade or so ago but they have shown signs of improvement in recent months. The visitors are just one point behind Milan in the table but home advantage could be key; as it usually is in these big contests.

It is impossible to back Malaga on current form. The hosts have failed to win in each of their last nine La Liga games; losing five of those. Las Palmas have struggled on the road this year but they should have enough to secure at least a draw in my final picks for the Pick 15...