An amazing weekend for new Syndicate Captain Bet Boss, as his 24 person Syndicate enjoyed a staggering £38,768 payout in this week’s Asian Handicap Pick 20 – all from a £64 spend.

There were numerous twists and turns along the way, one of the most notable being a Jamie Vardy consolation at the death between Man Utd and Leciester on Friday night, which (without the goal) would have thwarted the ticket at the very first obstacle!

Cash Out – better to be safe than sorry?

Offered £3,572 for his ticket before the 17:30 games on Saturday evening, he decided to take £1,428 for 40%. A comfortable victory for Leeds at Pride Park and a share of the spoils at Molineux meant the ticket would run until Sunday, as both handicaps were covered in the late game from Belgium.

A goalless draw at St Mary’s meant there were only 4 legs left by this stage and the Cash Out offer was now an eye watering £25,064! 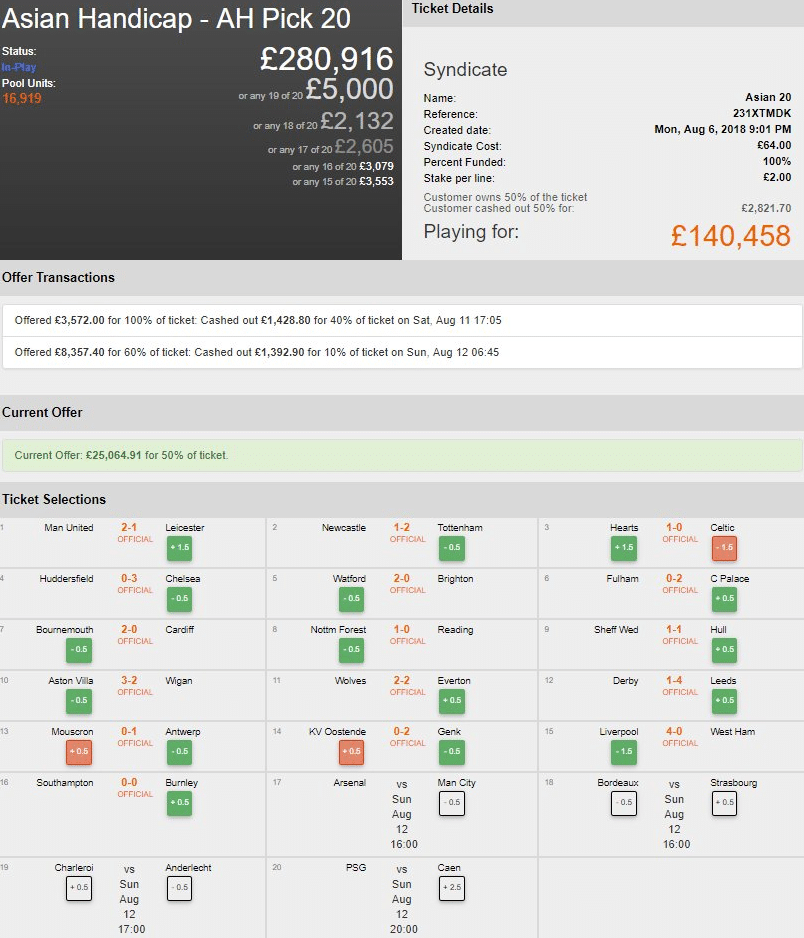 Bet Boss resisted the temptation, and his decision was justified, as last year’s champions Man City brushed aside Arsenal at the Emirates.

With both legs covered in games at Bordeaux and Charleroi, it meant it all came down to the Sunday night game between French giants PSG and Caen. For a colossal payout, Caen had to avoid a three goal defeat in the Parc des Princes. 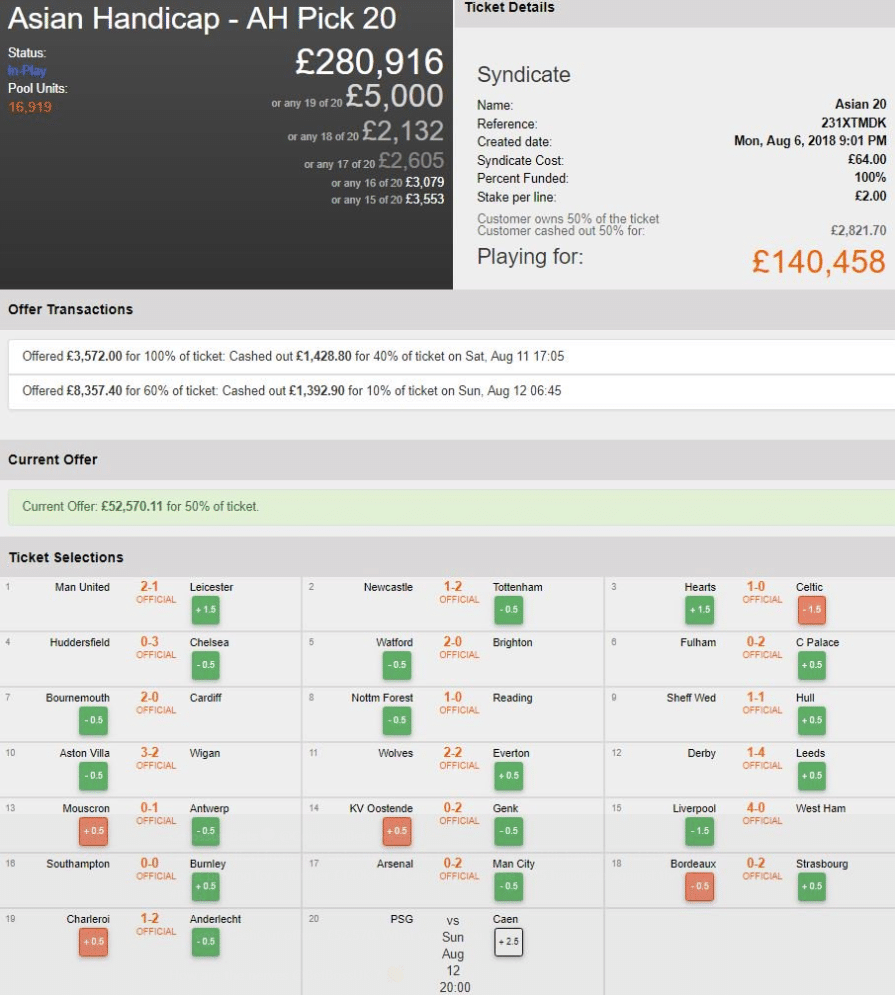 Discussing his decision to time his Cash Out’s when he did, Bet Boss said:

“I only owned 10% of the Syndicate myself so most of my players were in the same boat. I felt it was a good decision for me and probably good for all of us. If I’d had 50% of it I might have been a bit nervier!”

It turned out to be a very profitable decision, as an 89th minute Timothy Weah goal ensured a 3-0 victory for the Parisians.

After this superb win, Bet Boss admitted he may be increasing his share in his own ticket next week.

“This was the first Asian handicap Syndicate I’d tried and it filled pretty quickly. I may have to be a bit quicker myself next time! I’m glad lots of other people made some money though, it’s one for the people. Let’s see if we can go one better next week!” 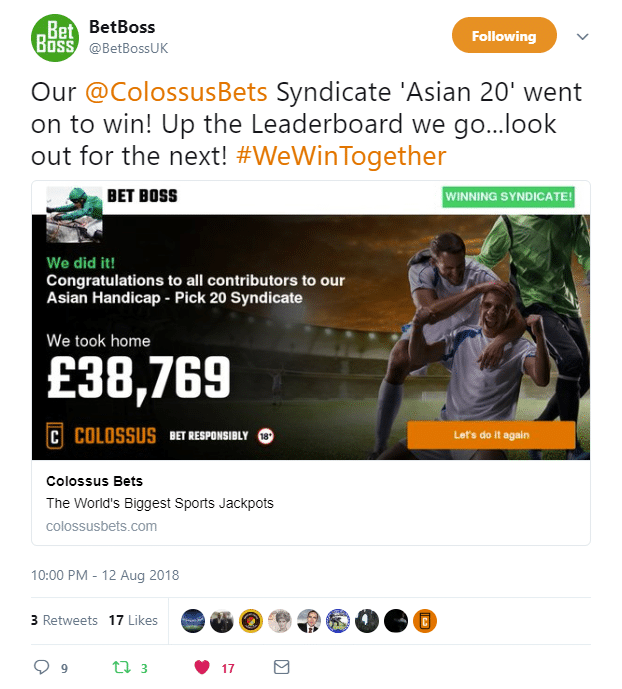 It was certainly a weekend that Bet Boss and his other 23 players will not be forgetting in a hurry! 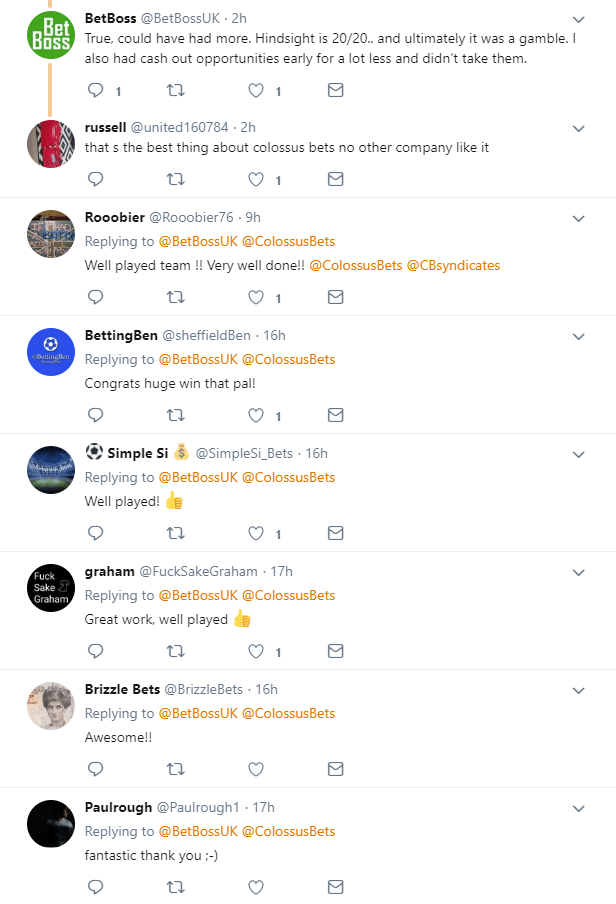 The Rollover continues in our Asian Handicap Pick 20!

Fancy your chances at predicting how the next pool unfolds? Join or Create your own Asian Handicap ticket for a chance at winning £280,000+!

Not sure what an Asian Handicap pool is? Read our guide on how it works – HERE.

You never know, you could be our next big winner!