Most unusual sports venues in the world

UFC president Dana White was ridiculed when he first revealed his idea for a Fight Island. However, the event has been a huge success, made all the more impressive by the constraints of COVID-19. Before the event, images of the octagon on the sands of Yas Island in Abu Dhabi got fans excited for what promised to be one of the most unusual sports venues in the world.

The events was actually fought indoors, utilising the special conditions needed to ensure safety from the pandemic. Nevertheless, the unique situation that surrounded UFC’s Fight Island definitely ranks up there in the list of the strangest sporting arenas. Find out what makes our list of 5 most unusual sports venues.

5 most unusual sports venues in the world

Tennis has produced several of the most unusual sports venues over the years, more as a way of promoting the sport or a specific event than in the spirit of competition.

Famously the first event of the year, which is usually the Qatar Open, seems to attempt to try and outdo itse 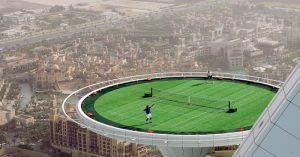 lf in its promotion of the event with several unique venues for tennis courts.

A platform made to look like a magic carpet, suspended 15 feet in the air over the streets of Doha was one. A traditional Doha boat and actually playing on water itself were two others.

But in perhaps one of the most iconic photos in Tennis history, and surely one of the most unique sports venues of all time, Roger Federer played Andre Agassi on top of a helipad in Dubai to promote the Dubai Duty Free Championships in February 2005.

Like its cousin, Squash has been played in some very unusual venues that are usually iconic in its own way. Unlike Tennis though, some of thiese events are competitive and one  particularly special 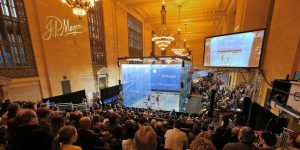 venue is even the home of an annual international tournament. These events become true spectacles when played in the most iconic venues in the world.

The Tournament of Champions is an international Squash tournament that dates back all the way to 1930. More recently though the event has been staged annually in the Vanderbilt Hall in New York’s Grand Central Terminal. A specially built squash court with four glass walls is placed in the middle of the hall giving the prestigious trophy a poetic backdrop. Squash has also been played in a one time event at the Boston Symphony Hall in Massachusetts, USA.

In an annual event, the usually warm-weather sport of Golf takes on a unique twist in what must be one of the strangest sports venues in the world. The Uummannaq Golf Course in Greenland 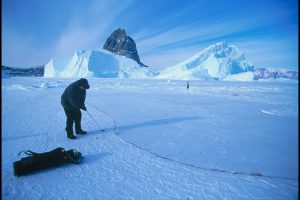 has been the home of the annual World Ice Golf Championships since 1999.

The sport of Ice Golf has gaines a cult following from fans with a common curiosity. The tournament is taken very seriously by everyone involved, despite not being deemed prestigious enough to be part of the PGA calendar. The tournament is played over two single day tournaments, with the first round in the format of the historic Ryder Cup, known in the Ice Golf world as the Niemann Cup, named after its founder.

The Carrier Classic is a Basketball game that first took place on the USS Carl Vinson on Veteran’s Day, November 11, 2011. The unique venue caught national attention as shown by t 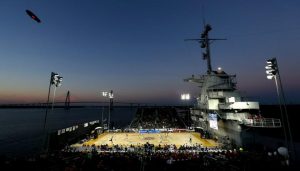 The event was hosted for the second year in a row in 2012 but was marred by cancellation of games due to condensation on the court. The event hasn’t been staged since due to the obvious logistical demands of hosting a sports event in a unique venue like a fully functioning aircraft carrier.

The Float on Marina Bay in Sing 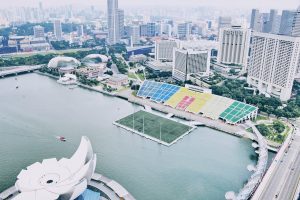 apore is a multi-purpose venue which has hosted several sporting events including football matches. The sporting venue is island-like and is only connected to land via three walkways. Aside from sporting events the venue is also used for music events and festivals.

It is situated alongside the Marina Bay Street Circuit, which is one of the most unusual sports venues in the world itself, hosting the F1 Singapore Grand Prix annually.

Does Financial Fair Play work or is this the end for FFP?
Who will win the Europa League in 2020?