At the start of the season, I think I’m correct in saying that Claudio Ranieri was one of the favourites in the bookmakers Premier League “Sack Race” betting.

I wouldn’t be the biggest fan of people making money out of managers losing their jobs but it does underline what a surprisingly good job Ranieri has done – actually it is nothing short of miraculous – in guiding Leicester to second in the table after losing just one of their 14 league games.

Contrast that to Garry Monk, who some were mentioning as a possible future England manager after Swansea’s unbeaten start in August, which saw them draw 2-2 at Chelsea, and beat Man Utd 2-1.

Fast forward three months and Monk is apparently under pressure after losing 1-0 at Liverpool.

It does make you scratch your head sometimes, as it is all so short term. But Swansea haven’t done that badly at home, a 3-0 loss to Arsenal aside, and I think they could get a point when Leicester visit on Saturday.

You always have to fancy goals when Leicester are involved, it seems, so I go with 1-1 and Any Other Draw (AOD). However, with Vardy on fire and confidence sky-high, I think it makes sense to add in 2-1 to the away side, too.

West Brom have lost four of their seven home games, and it could be defeat number five as I take Tottenham to nick a tight one 1-0 or 2-1.

Tottenham have built their impressive start to the season largely on their unbeaten home form, but they have only lost once on the road – an opening-day 1-0 defeat at Man Utd – and they just look a very solid outfit, with a fair bit of class thrown in.

However, I can’t rule out a draw – Tottenham have shared the points in half of their league games – so 1-1 goes in my Colossus perm, too.

It’s Bayern Munich first, the rest nowhere in the Bundesliga. But Wolfsburg v Dortmund sees third play second on Saturday, and it’s a tricky one to call.

Wolfsburg are unbeaten at home in the league and have performed well in a tough Champions League group, while Dortmund bounced back from a couple of losses when beating Stuttgart 4-1 last weekend.

Wolfsburg won twice, and drew the other game, in the sides’ three meetings last season. And there were at least three goals in every match. 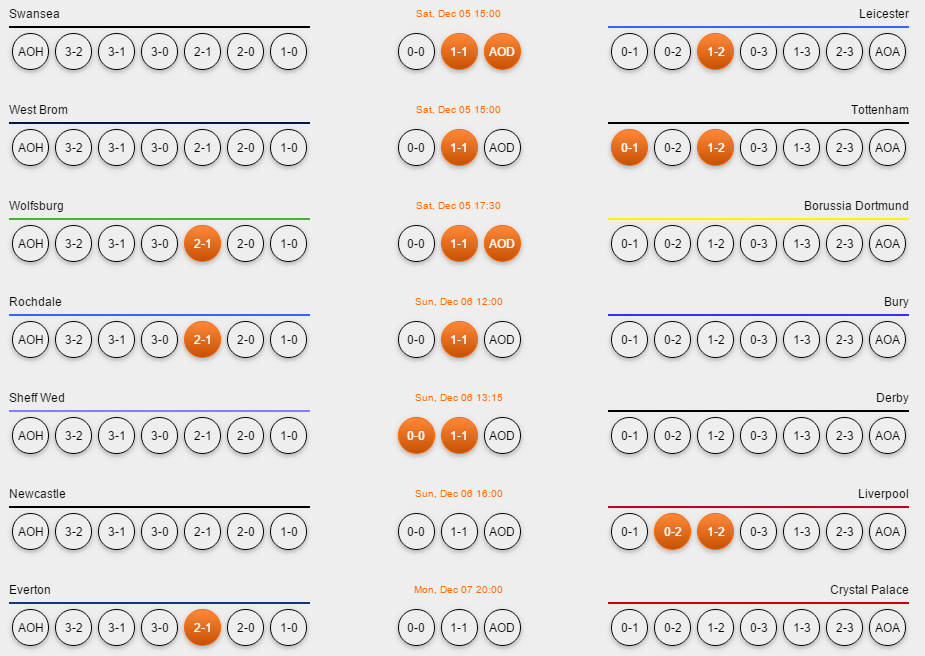 Rochdale v Bury wouldn’t be my specialist subject on Mastermind, that’s for sure. Only three points separate them in League One, though, so I’ll go with home advantage (2-1) and a draw (1-1) and quickly move on!

Sheffield Wednesday have an excellent home record with five wins and only one loss in their opening nine matches, but they will need to be at their best when third-placed Derby visit at the weekend.

Derby have only conceded 11 goals in 18 games, while Wednesday have shipped a respectable nine goals in front of their own fans. So I go 1-1 and 0-0.

Talking of managers under pressure, Steve McClaren will be desperate for a result on Sunday after his side have conceded eight goals in their last two matches.

But I fear it could be further doom and gloom against an in-form Liverpool.

My main fancies are 2-0 and 2-1 to the Reds but if Newcastle don’t show up again, then it could be another very long afternoon for the home fans. It would be understandable if you wanted to include AOA in your perms, especially after that Liverpool performance in the Cup on Wednesday night.

Everton v Crystal Palace rounds off the Colossus on Monday night, and 2-1 to the home side gets my vote.

Palace are a match for the best on their day, as they showed in a 2-1 win at Anfield last month, but they do blow hot and cold and they may find this visit to Merseyside less profitable.

Everton are unbeaten in their last six games in all competitions, and have goals in them, although they do concede their fair share, too.