While it’s Slovenia that undoubtedly have more to play for on Thursday, Gareth Southgate’s men are yet to ensure top spot and failure to do so before the final group game would really shine light on what has been a very underwhelming qualifying campaign. The visitors know that defeat would all but guarantee that they are unable to finish second so will have to open up at some stage, even if they do try to keep things tight in the first half. That should play into England’s hands, and while Dele Alli is unavailable through suspension the likes of Kane, Sterling and Rashford are in strong form and should have too much for their opponents, who are once again without the impressive Kevin Kampl. I’m backing England to beat Slovenia in the first fixture in this week’s Pick 8.

There’s no escaping the enormity of this match for both sides’ chances of securing a place in the play-offs, though it’s Scotland that know anything short of victory would likely be too little. Slovakia have a favourable home game with Malta to conclude their group matches so, provided neighbours Slovenia don’t spring an upset at Wembley, would no doubt take a draw come Thursday. In the likes of Skrtel, Skriniar and particularly Hamsik, the visitors have the stronger individuals in key positions but the Tartan Army will be roared on by a vociferous home crowd so this is too tough to call!

Another huge game in what is likely to be a straight battle for the runner-up spot in group E, both Montenegro and Denmark enter this encounter in strong form. Both nations have some very fine players and their close proximity in terms of quality is reflected in the group standings, not only level on points but also goals scored and conceded. The home support will create a wild and intimidating atmosphere for the Danes, which could prove the difference, and a draw wouldn’t really suit either side. With match winners in both camps I don’t see this one ending in stalemate.

With the top two spots already assured for these two sides, Northern Ireland could keep their extremely faint hopes of automatic qualification alive with an unlikely victory – relying on the Germans to lose to Azerbaijan in their final game… Nevertheless, Michael O’Neill’s side will be motivated to spring an upset of their own and have been buoyed by the absence of the injured Timo Werner from Jogi Loew’s ranks. The visitors are short in attack as a result but their quality throughout the squad should tell in what is likely to be tighter affair than many might expect. 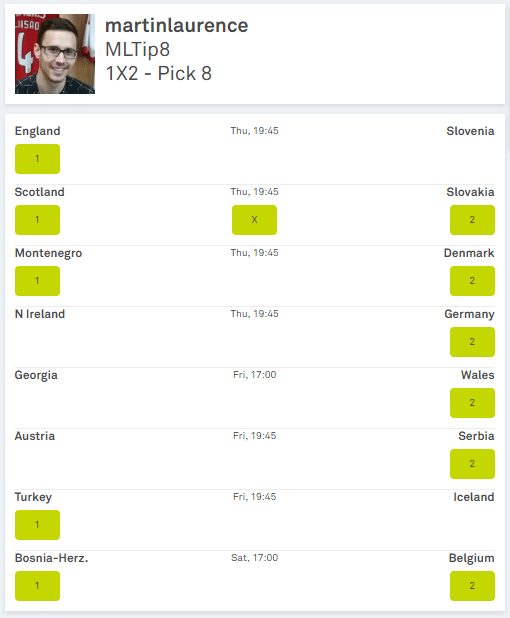 The big news for Chris Coleman’s men is that star man Gareth Bale will miss the two decisive qualifiers in the coming days, which is the worst thing that could have happened. Moreover, Georgia are no mugs and since diminishing Wales’ qualification hopes with a point in Cardiff this time last year they’ve lost just one of their last six matches, drawing the other five. It could be a very frustrating and nervous night for the visitors as a result but the prospect of a winner takes it all match up with Ireland next week should see them through, with a victory capable of keeping their automatic qualification dreams alive should Serbia fail to win in Austria.

It’s almost mathematically impossible for Austria to qualify, while Serbia know that a victory on Friday would see them guarantee top spot. The potential reward for the visitors is far greater then, and Slavoljub Muslin’s side have impressed throughout the qualifying campaign, where the hosts have underwhelmed massively. After picking up just two points from a possible 15 from the three sides above them in group D, their hopes of qualifying for back-to-back tournaments have dissipated, and so too has the confidence in the camp so an away win is on the cards.

In what is arguably the most intriguing group in qualifying heading into these decisive two matches, Iceland could take a huge step towards a top two finish with victory in Istanbul. However, now under the tutelage of the vastly experienced Mircea Lucescu, Turkey have rejuvenated their hopes of booking a place in Russia. A 1-0 victory over leaders Croatia last time out blew this group wide open and proved just how difficult an atmosphere it is for away sides. Iceland haven’t travelled well either, with their only victory coming in Kosovo, and the hosts should be favoured to take this group right to the wire in what will be an enthralling end to the campaign on Monday.

Belgium could be forgiven for taking their foot off the gas having already qualified from group H with ease but Roberto Martinez has named his strongest squad possible in the absence of Dembele and Benteke. The likes of Batshuayi and Mertens may have a chance to prove their worth from the front if Lukaku is rested due to a minor injury, but that just highlights the Red Devils’ strength in depth. Bosnia have a strong squad themselves and as such their struggles to cement second spot have been a little surprising. Defeat could see them slip below Greece ahead of the finale, who finish up against Gibraltar. The incentive to win for the hosts is huge as a result, so either way I don’t see this ending in a draw.