No way I’m able to call this one kicking off the Pick 8, with both sides picking up morale boosting wins in Europe in midweek and in impressive form of late. The Blues have had a more trying week, it should be said – flying to Madrid where City played at home against more modest opposition in Shakhtar – but they also have home advantage in this one.

The visitors’ sensational scoring run in the league may come to an end of sorts, with Chelsea providing a far tougher test, but Guardiola’s men are in scintillating form and if I was forced to pick a winner I’d favour City. Luckily, however, you don’t have to choose on Colossus Bets, so I’m going to sit back and enjoy this one!

After an excellent season last time out Reading have been incredibly disappointing so far, with Jaap Stam struggling to get the same tune out of his side. Norwich have begun to find their rhythm a little under new boss Daniel Farke, who has instilled a similar ethos in the Canaries as his opposite number, promoting possession football.

The visitors have picked up very impressive back-to-back away wins and I could certainly see them getting another result in this one.

It’s been a tricky start for these two sides, with Werder Bremen in particular facing a tough fixture list to now. As such their league standing is perhaps a little false, without a win in six games, with star man Max Kruse sidelined. The hosts are also without key players though, so this game is difficult to call.

A draw is the most likely outcome for me, with home advantage potentially proving the difference. 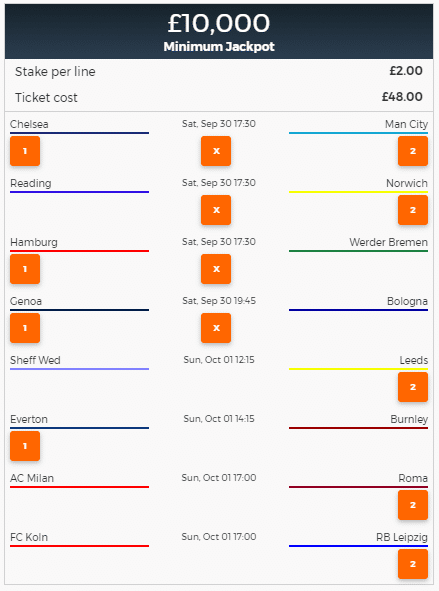 While Genoa are entrenched in the bottom three at this early stage, without a win thus far, they haven’t been outclassed once this season despite facing some strong opposition. Bologna have had a very decent start, particularly away from home, and will fancy their chances but again a stalemate seems more likely.

The games certainly don’t get any easier to predict with this one, as both sides aim to bounce back from disappointment in midweek. Wednesday looked to have picked up after a slow start but back-to-back defeats have come them adrift, while Leeds have relinquished top spot after two consecutive away defeats. The Whites did the double over the Owls last season and I’d fancy them to get a result once more.

A much needed win last weekend has eased the pressure on Ronald Koeman a little, but another against Burnley will be expected by the board and the fans. Sean Dyche wouldn’t have it any other way and has got his Clarets picking up points on the road where they struggled so badly last season.

This is actually the visitors’ easiest game away from home yet, but that’s not necessarily a good thing as they will be expected to do a little more pressing of their own. The Toffees should just have enough.

Much was made of Milan’s remarkable summer in the transfer market but they have shown already this season that you can’t buy success, at least not instantly anyway. The rossoneri have faced two decent sides in Serie A and lost both, to Lazio and Sampdoria, with Roma a more difficult proposition than either. The visitors have won the last three meetings between these sides, including two convincing wins at San Siro, and I’d fancy them to make it four come Sunday.

It’s been a woeful start to the campaign for Koln, whose league season has suffered due to the distraction of a return to Europe. They have, however, fared poorly in the Europa League to boot, with an awful loss in midweek, and confidence will be at an all time low as they continue to struggle since the departure of top scorer Anthony Modeste. Leipzig suffered a disappointing defeat of their own in Istanbul but should brush the hosts aside in this one.