It’s been seven years since Colossus Bets was first introduced to the world. Each year brings new challenges and achievements and this one was no different. So what has happened in the world of Colossus since August 2019?

In September we announced a long-term licensing agreement with fixed odds giants bet365, to allow them to tap into our extensive cash-out patent portfolio in the US.

The patents cover offering cash-out on several gaming verticals in the US, including poker, casino, lottery and, most notably, bet365’s world-leading sportsbook offering.

That wasn’t the only bet365-related news of the year, however, as in February they launched Colossus UK and Irish racing pools on their website.

In February the PDC Premier League returned to our screens and Colossus offered darts pools for the first time in our history.

To celebrate, we recruited a brand ambassador in January who had recently been something of a history maker herself; Fallon Sherrock.

After becoming the first female player to win a PDC World Championship match in December, record-breaking Sherrock partnered with Colossus through the opening months of the year, including her own debut in the PDC Premier League when she became not only the first woman, but also the first wildcard, to claim a point in the Premier League after holding table-topping Glen Durrant to a draw.

Even more impressively, she overcame a 200 point headstart to beat our Syndicate & Community Manager in a game.

What happened when @Fsherrock gave @ColossusCaptain a 200-point head start in a leg of darts? 🤔

What do you think 👀😂 pic.twitter.com/YhbuHA1G6H

Our partnership with Fallon Sherrock didn’t go unnoticed and we were nominated for an award at the EGR Operator Marketing and Innovation Awards 2020 for ‘Best Use of a Brand Ambassador’. Perhaps inspired by Fallon Sherrock’s own success, we beat off the stiff competition and won.

The summer of 2020 may have been something of a damp squib due to inconsistent weather and restrictions put in place by the ongoing Coronavirus pandemic but 2019 was a different story. 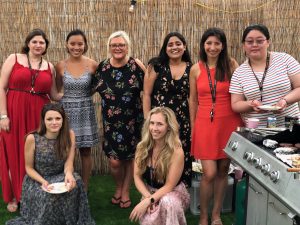 l and fiercely-contested summer event; BBQ Wars. The three groups were Ladies, Gentlemen (27 or younger) and Gentlemen (28 or older).

The older Gentlemen produced a solid cooking performance but couldn’t quite find enough to claim the title.

Then it was the turn of the younger Gentlemen, who took a creative approach to their barbeque by diverting most of their attention away from the actual food and towards the alcoholic offering. Though a good time was seemingly had by all, reports of uncooked food meant that they couldn’t possibly win.

In the end it was the Ladies who did the best job and were awarded the title of Colossus BBQ Champions 2019. With the event postponed in 2020, they will hope to defend their crown next year instead.

Once again Colossus had a stand at ICE 2020 and we think it looked pretty good! 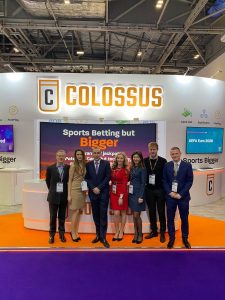 For the Colossus Christmas outing, CEO 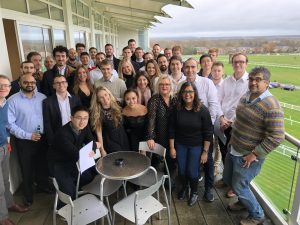 Bernard Marantelli very generously took the team to Sandown Racecourse in December, where we watched the day’s action unfold from the comfort of a box.

Unfortunately, with several races seemingly not going to plan, various staff member were heard muttering about how much the free day out was costing them.

In the evening, the team returned to London and enjoyed a fantastic dinner at Ping Pong in Waterloo.