One of our biggest and busiest Captains, Vuoksenmaa – ESBC, and their Syndicate, created a fantastic Cash Out story over the weekend in the €1,000,000 Correct Score Pick . Playing a €96 ticket for €0.20 a line, there was €100,000 on the table as Burnley vs. Newcastle and Sheff Utd vs. Aston Villa got underway at 15:00 on Saturday.

The Syndicate watched gleefully as Burnley nicked a 1-0 win in a predictably tight affair at Turf Moor. Meanwhile the in-form Sheff Utd won the battle of the promoted sides at Bramall lane, triumphing 2-0 over Aston Villa in a match where Vuoksenmaa had permed five different results. 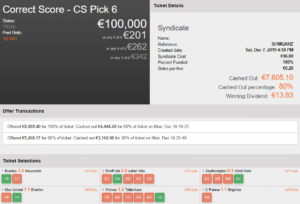 The evening fixture took place at St Mary’s where two struggling sides, Southampton and West Ham, battled it out for three much needed points. A 1-0 victory for West Ham left Southampton deeply entrenched in the relegation mire but proved fantastic news for the Syndicate, who finished the day with three correct scores in the bag.

Just 5.6 units remained active in the pool as the next two legs got underway at 14:00 on the Sunday. At Molineux Vuoksenmaa had permed six selections in the clash between two European hopefuls, Wolves vs. Tottenham. A 91st minute Jan Vertonghen goal have Tottenham a 2-1 win and was further great news for the Syndicate, who had resisted any overnight Cash Out offers.

Meanwhile, at Old Trafford, Manchester United and Everton were duelling it out under the management of two men who had extensive experience of the fixture as players, Ole Gunnar Solskjaer and Duncan Ferguson.

With just two selections on their ticket, the Syndicate needed a 1-0 win for United or a 1-1 draw to progress. However, those options were soon halved in the 36th minute when a Victor Lindelof own goal put Everton ahead.

United were struggling against a revitalised Everton evidently living in fear of the daunting Scot who had been put in temporary charge of the club. However, when Solskjaer replaced the anonymous Jesse Lingard with Mason Greenwood in the 65th minute, their tails picked up. It proved to be a truly inspired substitution just 12 minutes later when Greenwood slotted home a cool finish to make it 1-1 and send the Syndicate into delirium.

It was five from five and, prior to the final leg on Monday evening, a huge Cash Out offer arrived,  the Syndicate were offered €8,888 for the ticket. With just a single selection, 1-0 to Crystal Palace in their grudge match against Brighton, would Vuoksenmaa Cash Out?

He put the decision to his followers on Monday, initially opting to Cash Out half of the ticket for €4,444. However, throughout the afternoon news broke that Roy Hodgson’s side were on a wrong end of a defensive injury crisis and would be stringing together a makeshift back four. With Palace suddenly a less appealing prospect, Vuoksenmaa took the executive decision to Cash Out a further 30% of the ticket, securing the Syndicate €7,605 with 20% of the ticket still running.

Alternatively, we could #cashout 8888€ sure money waiving the win potential. We are aware of the line-up-situations.

When Palace vs. Brighton eventually got underway, the watching contributors must have been thrilled with the Cash Out decision as an injury hit Palace were under the cosh from the first whistle. Going into half-time goalless, it didn’t take long after the break for the Eagles’ resistance to falter and, in the 54th minute, Neil Maupay put the Seagulls ahead. The ticket had lost!

Palace would eventually nick a point courtesy of a Wilfried Zaha strike but it mattered little to the 27 contributors to the Syndicate who were jubilant at their Captain’s Cash Out decision, earning them €7,618 for a ticket that would had been worth a mere €201.

A fantastic result courtesy of a very well thought out Cash Out from Vuoksenmaa!