Just because the club season has finished doesn’t mean there isn’t still footy to be found and pools to be won. As proven by our latest big winner on Thursday night.

For the cost of a deep sea diver, our punter struck their bet a few minutes before kick off placing a 5 x £1 line 1 x 5 x 1 x 1 ticket. The 5 selections in leg 2 highlighting the beauty of our multi selection option.

The Euro Under 21 Championships got underway on Wednesday night in the Czech Republic, with the hosts playing Denmark. Leg 1 in this Pick4.

The Danes trailed up to just under the hour mark, but levelled the scores to one a piece, and an inspired substitution from Denmark boss Jess Thorup saw them grab a late winner through Pione Sisto 6 minutes from time. The game finished 1-2

Safely through into leg 2, our punters next hurdle was Germany against Serbia. Using the multi selection option and choosing 5 scorelines, the ticket leaned towards a German win, but still keeping a potential 1-1 draw up their sleeve just incase, which would prove wise…

The Serbs were 1 nil up within ten minutes, but Liverpool’s Emre Can cancelled it out not long later, just one red card followed for the remainder of the game and not a lot else. The Serbs were more than happy with their point, along with our Pick4 player. 1-1 see’s them into the third leg as things start to hot up.

Into England’s group we move for the final legs. Another game that see-sawed, Italy v Sweden. Sweden’s Alexander Milosevic brought down Italy’s Andrea Belotti and was sent off after just 28 minutes, Beradi slotted home the penalty, it looked bleak for Sweden and our punter.

But, it’s never over until it’s over, and when Sweden mustered a rare attack in the 56th minute earning only their second corner, young Swede Guidetti turned the ball home to level up.

This rocked the Italian’s, and things were about to take a dive further, the numbers were evened up with 10 on the clock as Sturaro was red-carded for a push in the face…handbags, but letter of the law and all that.

5 minutes from time, Sweden had the perfect opportunity to win it, when Mikael Ishak went down under the challenge of Francesco Bardi in the area. Thelin stepped up and duly obliged. Another 1-2 scoreline and it’s into the final straight.

Gareth Southgate, who made his name at a European Championship back in 96 with his famous ‘tame’ spot kick in that semi final defeat to Germany at Wembley, led his young Lions out hoping for a more positive result against Portugal in their opener.

But this is England remember, and you know the drill when it gets down to the nitty gritty, regardless of the age group. Seniors, Under 21’s, same outcome it seems. Our punter obviously has the same thinking, hoping for a one nil victory for the Portuguese.

England’s line-up, all be it slightly under strength when you think of some of the talent that has bi-passed the Under 21’s and gone straight to the grown up’s stuff, was still featuring plenty of talent, none more talented apparently, than Spurs’ Harry Kane – a player being linked to Man Utd for mind boggling figures. On this showing, Tottenham should snap their hand off.

A 1 nil Portugal win would win our Pick4 punter £20,833.33 – from a £5 bet! 0-0 at half time, the kids from Portugal began to turn the screw early on in the 2nd half. Having won all ten qualifying games, they kept the winning streak going and took all three points here. Joao Mario bagging a 57th minute goal, securing the 1-0 win needed for our , now, much wealthier player. 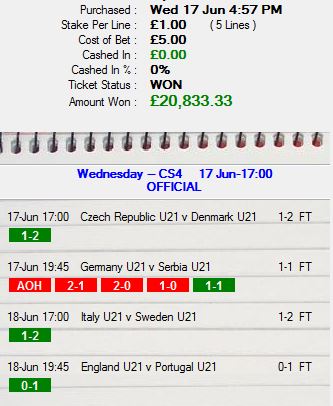