Our winner placed their £4 Solo ticket into the £527,888 Asian Handicap Rollover a couple of hours prior to kick off on Friday night, with 16 FA Cup 3rd round ties and 4 La Liga games to tackle.

On Saturday, they successfully navigated a further 8 FA Cup ties before making the first of four Cash Outs during the pool, accepting 30% of their offer for £348.

To the 17:30 kick offs then, where they managed to get through 3 more FA Cup ties unscathed. And they finished off on Saturday evening by getting past another La Liga game as Huesca won 2-1 at home against Real Betis.

There was a 3rd La Liga success on Sunday morning before 3 more FA Cup ties kicked off at 14:00. At half time in those games they were on course to go through (if results remained unchanged) but they decided their £67,723 offer was too juicy to completely ignore and Cashed another £27,089. Incredible work and things would get better for them as they progressed through the 14:00 ties to ensure a passage through to the final leg.

The 10% of their ticket that they left untouched needed Getafe to finish their game against Barcelona within 1 goal of the Catalan giants.

Barca raced to a 2-goal lead but Getafe pulled 1 back just before half-time and there were no second half goals as the game ended Getafe 1-2 Barcelona, therefore securing a win for the punter, earning them a extra £52,817 dividend! 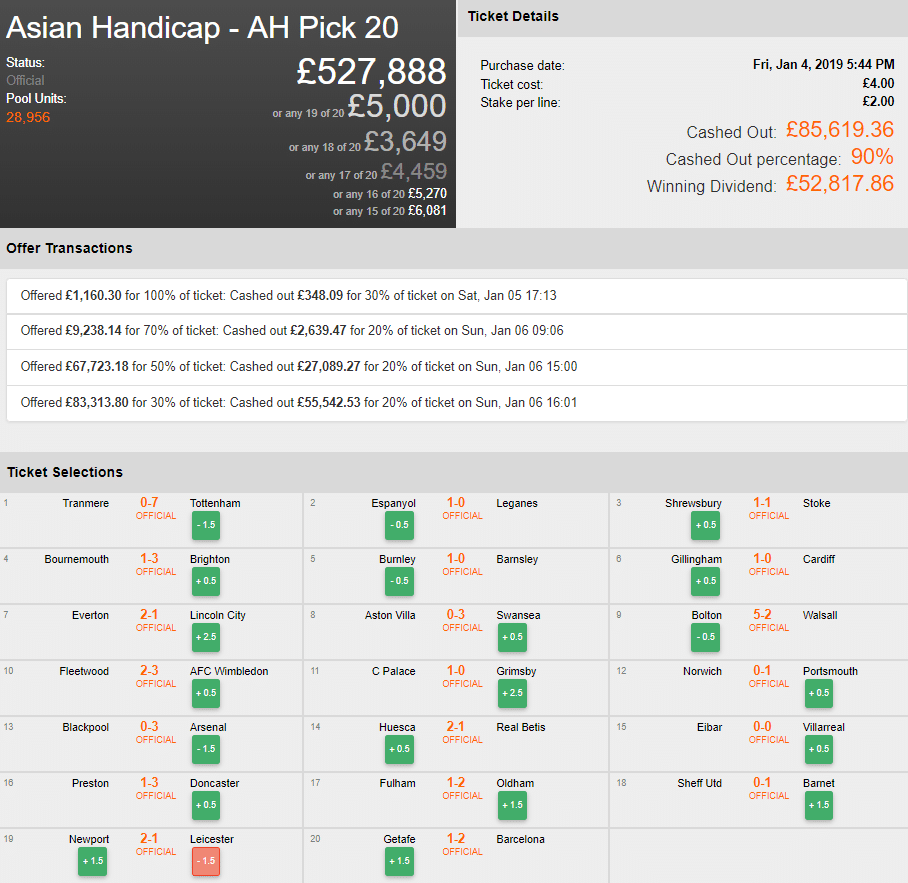 The Houston Rockets clinched a 1-point victory after overtime at the Golden State Warriors as last year’s MVP – James Harden – scored a triple-double with 44 points, 10 rebounds and 15 assists.

The Brooklyn Nets beat the Grizzlies by 9 points in leg 3. At the same time, the Pacers beat the Bulls by 3 points in another game that went to overtime.

Finally, in leg 5, Russell Westbrook and Paul George led the Thunder to a 2-point win in Portland, scoring 31 and 37 points respectively.

The best of the Wild Card Weekend Rollover winners

Our NFL Wild Card Weekend Rollover kicked off on Saturday evening with the prize reaching a very healthy £20,720 (over £5,000 more than what we estimated).

With Andrew Luck in good form, there was a strong expectation that the Indianapolis Colts would beat their AFC South Rivals – then Houston Texans (11-5 in the regular season). But the size of the victory (21-7 to the Colts) was somewhat unexpected as the 13-18 Point Margin victory knocked 9,544 units out of the pool (from a total of 10,209) after the first leg.

The Dallas Cowboys 2-point victory over the Seattle Seahawks was more of a friendly result for punters, as 162 units remained in the hunt for the Rollover prize going into Sunday.

In leg 3, the LA Chargers were too much for Baltimore Ravens’ QB Deshaun Watson as they won by 6 points, leaving 35.3 Units remaining as we entered the final leg.

Bears’ kicked, Cody Parkey, had a chance to win the game with a field goal attempt, but his effort hit both the post and the crossbar as the Bears succumbed to an agonising 1-point defeat.

Again, there were no Cash Outs on this ticket and the customer’s £ 8 effort returned £3,468!

Have a crack at this Saturday’s Boosted £5,000 Point Margin Pick 4 as the Divisional Round Playoffs commence.