The final match of the English club season. The World famous FA Cup Final. Wasn’t really much of a ‘match’ in the end, truth be told. In the most one sided final since Fergie’s United battered Chelsea 4-0 in 1994’s final, the Wenger Boys were out to put on an equally impressive mauling from start to finish.

So, what was your score prediction for this one before the off? Many thought it was going to be a sizeable victory for the Gunners. But which? 4-0? 4-1? 4-2? 5-0? 5-2? Well, you can always select ALL of them. Just like one lucky punter displayed here.

Our ‘Any Other’ selection enables you to group scorelines not displayed on the coupon. So if you fancied a lumpy Arsenal win, you could go AOH (Any Other Home) and cover all of the above.

Saturday’s Pick4 rollover, which contained the cup final as leg 1, reached a whopping total pool prize of £305k – this the reward on offer for predicting the correct score in our 4 selected matches. We’ve picked out just one of the winning tickets, who, for the price it costs to reserve a shopping trolley at your local supermarket (£1), placed a 50p per line, 2 liner 1 x 1 x 2 x 1.

And as you will see, our unique ‘Any Other’ selection certainly paid dividends come Sunday evening.

Leg 1, Wembley, and Villa Goalie Shay Given was making his first cup final start since 1999, quite a record that, and credit must go to the gritty Irishman for some of the remarkable saves he pulled off to keep it goalless prior to Theo ‘I wanna be a striker’ Walcott’s opening strike. This was one way traffic of the highest order.

Moving on to just past the hour mark, and to summarise, Arsenal are now 3 nil up, cruising towards their 12th FA Cup. Tim Sherwood cuts a frustrated figure on the touchline and had he been wearing one, his famous gillet, sorry, coat, it is NOT a gillet, sorry Tim, well had he been wearing it, it would’ve been tossed to the ground. Tim was thumping.

Our punter might have been thumping watching this too. Needing an AOH (Any Other Home) win to get through leg 1, Arsenal were on auto pilot in the final stages, content with 3 zip. But luckily, Wenger made an inspired Pick4 aiding sub for this punter. He withdrew Walcott and gave the dropped Olivier Giroud a 15 minute run. The big Frenchman paid Le Boss back in stoppage time, nipping into the area to score one of his trademark outside of the boot tap-ins, making the result 4-0 and an AOH.

Leg 2, the Spanish Cup Final. Athletic Bilbao v Barca. This game will be remembered for one thing and one thing alone. Leo Messi adding yet another wonder goal to his ever expanding catalogue. Reminiscent of a playground scene where the school hogger goes on a one man mission ‘mazy’ from near halfway, the mercurial Argentine done a whole lot of weaving and jinking before drilling into the net from inside the area. It finished 1-3.

The remaining legs were from Italy. And once again, our friend ‘Any Other’ was again utilised with success by our player. They had AOA (Any Other Away) for Napoli v Lazio. The match finished Napoli 2-4 Lazio. And they chose AOH for Inter v Empoli. Inter won 4-3. 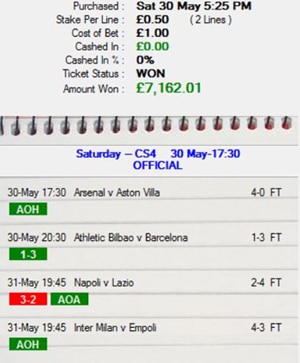 The power of the ‘Any Other’ selections. This players £1 ticket went on to win over £7k after 4 correct score selections copped.