The power of Consolation prizes became evident over the weekend as one player scooped a whopping €1,251 on the 1X2 Pick 15 pool from a €2 stake, despite getting three selections wrong.

With the international break in full swing, the pool was comprised of Euro 2020 qualifiers as well as matches from League One and League Two.

The first ten legs were set to take place on the Saturday afternoon before the final five continued on Sunday, so it was important to get off to a strong start.

The 3PM kickoffs brought the first batch of eight legs and, as they drew to a close, the player had called six out of eight correctly. It was a solid start but, in a pool where 11 correct selections are needed for a return, there wasn’t much more room for error.

Fortunately, two Euro 2020 qualifiers kicked off at 5PM presenting an immediate opportunity to establish a stronger position. Sweden were comfortable in beating Romania and Malta survived a red card and a missed penalty to secure their first win in 17 matches, breathing new life into the ticket. Suddenly, with five legs to go, it was all to play for. Having correctly predicted eight out of ten at the close of play, the player needed to get at least three of 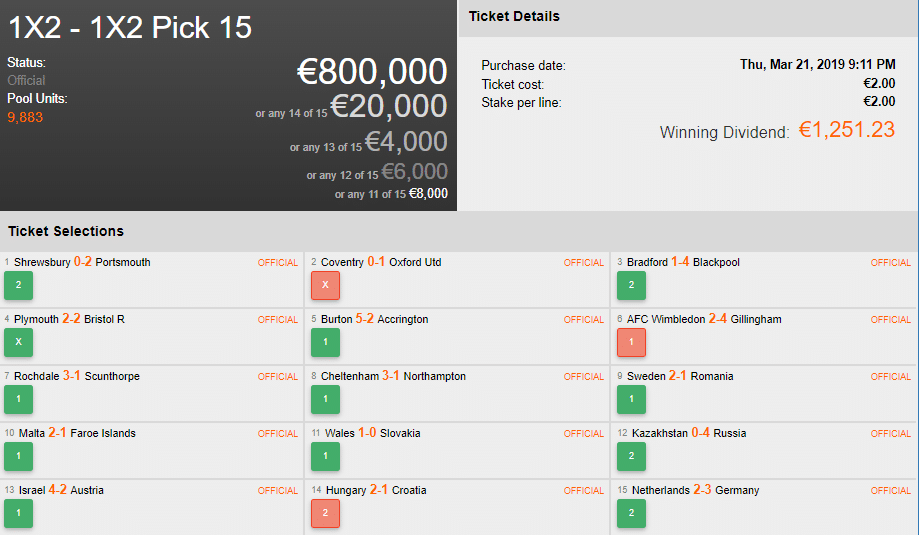 their remaining five selections right to establish a return.

If Saturday’s legs were dominated by domestic fixtures, Sunday was international day and the fixtures were staggered throughout the afternoon.

The day got off to a glorious start with Russia romping to victory against Kazakhstan and Wales edging a narrow home win against Slovakia. Having looked in the balance at one point, the percentages were now firmly on the player’s side, with only a single win from the final three matches required to enters the winners’ circle.

Despite taking an early lead, Croatia couldn’t hold up their end of the bargain and fell to a surprise defeat in Hungary. With Israel falling behind to a Marco Arnautovic goal, it looked as though the pendulum was beginning to swing again. However, a 19 minute hat-trick from Eran Zahavi saved the day and locked in the winnings.

With the pressure now off, the only question remaining was how much profit the ticket would yield. The hopes rested on Germany who had a tough away fixture against the Netherlands to negotiate. Having sailed into a 2-0 lead after 34 minutes, it looked as though the final leg was secure. However, the Germans have looked vulnerable since their torrid showing in the World Cup and the Netherlands were able to stage a comeback in the second half, levelling the match.

As the minutes ticked away so did hope of securing the fateful 12th leg until, in truly dramatic fashion, Nico Schulz popped up for Germany in the 90th minute to net a late winner. It landed our player a tasty €1,251 win which was a 62,450% increase on their original €2 stake. Not a bad way to round off your week!

Cheltenham Winners (& a couple from the footy too)
Shrewd Syndicate Lands £4,471 In Wincanton Place Pool