It’s time to take a look at some of the best winners over the past week, including a superb effort into an NBA pool on the weekend where a customer’s $0.20 ticket won them $2,500!

This single line ticket (not the only one that features in this week’s blog) was placed a couple of minutes prior to the off in the first race at Punchestown last Wednesday.

The solo player’s bet got off to the perfect start, having picked out Millliner (3/1) and Conron (4/1) who both managed to overturn the favourites in races 1 and 2 respectively.

Following that, they had the favourite in races 3 and 5 as well as the joint fave in race 6 as the ticket sailed home to victory, returning a huge £6,666 from just £2!

The Best of the Consolation prizes over the weekend

Our Asian Handicap Rollover kicked off on Friday with the total prize reaching a grand £421,252!

The player’s chances of winning the full prize ended when Brentford were beaten by Bristol City at home (in leg 8), but their ticket went the rest of Saturday without another blemish.

Things were a little more shaky on Sunday with Rayo Vallecano unable to get a positive result at home to Getafe as well as Fiorentina being held at home Cagliari in Serie A. But those three losing selections wouldn’t stop this ticket from getting a great payout.

Marseille won with the only goal of the game away at Nice to secure a 17/20 Consolation prize for the punter as their £16 punt won them £1,288!

The new Asian Handicap Pick 20 Rollover kicks off this Friday with the prize currently at £425,000 and growing – see it here. 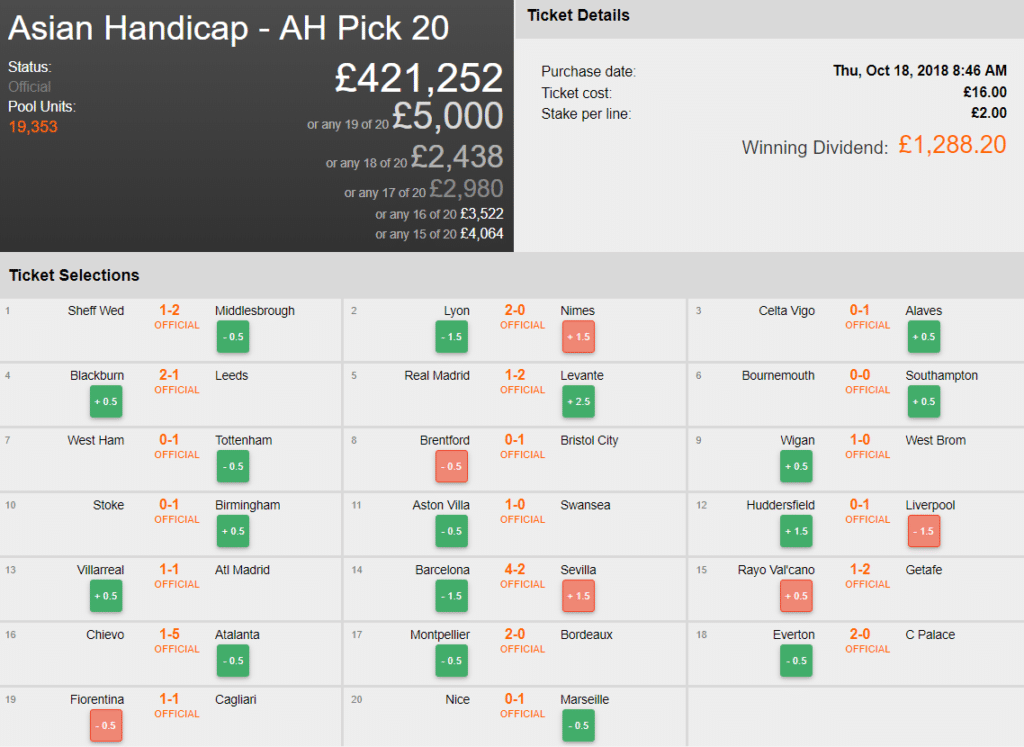 Friday’s Pick 8 only part-won, pays big dividend to this customer!

This smart ticket is the pick of the bunch from this weekend’s footy winners.

They foresaw Blackburn beating Leeds on Saturday morning and the draw in the big one between Chelsea and Man Utd – they probably owe Ross Barkley a thank you for grabbing the last gasp equaliser in the exciting clash!

Brighton and Watford’s respective away wins were great for this player as they were responsible for eliminating a massive number of Units from the pool, leading to a better dividend for winners.

Legs 7 and 8 were played concurrently, as Derby got themselves a home win against Sheffield United and Liverpool held on to victory away at Huddersfield. Those two results led to a huge £5,190 from just an £8 bet! Great punt!

Have you seen the NBA is back?

These single line beauties are bets we love to celebrate, as it goes to show that small stakes tickets can win you a massive prize.

The below player picked out four 1-4 Point Margin victories on their coupon, but it was Portland’s 13-point win over San Antonio Spurs that stood out as the key selection.