A fantastic week of action came to a close last night and what a Sunday treat the Premier League laid on. Three massive derby matches back to back – naturally, we did the right thing and put on a boosted Pick 3 for you. Check out who nailed all three Correct Scores and features in this week’s Weekly Winners blog.

Let’s be honest, there was no real need to leave the house from midday onward yesterday – perhaps for food and drink if absolutely necessary, otherwise you should have been securely planted to your seat. Chelsea vs Fulham provided the starter on derby day and it was pretty smooth for the Blues from the off – our Solo punter had six selections to fall back on in the game and 2-0 came up trumps.

North London derby next up on the menu – a delicious main course it would prove to be too. Goals a plenty, penalties, GK howlers a red card and a ‘brawl’. The rollercoaster game saw both sides exchange the lead, but in a dominant display, Arsenal finished up taking the bragging rights with a 4-2 win. That’s ‘Other Home Win’ in Colossus terms and 2 from 2 for our Pick 3 punter!

Finally, enough room for a tasty dessert? Go on then! It seemed that all the goals had been used up in London, nobody able to find the net on Merseyside deep into the final embers of the match (our punter desperate for a 1-0 Liverpool win for a perfect Pick 3), but it’s not over until it’s over and on a bad day for goalkeepers (Yes Bernd Leno that is in reference to you), Jordan Pickford kept the theme running with an uncharacteristically calamitous blunder. In the 96th minute, Divock Origi was the beneficiary of a gift from the England number one after he fumbled a high ball, laying it on a plate for the Belgium forward.

A thrilling end to derby day sparking wild celebrations from Jurgen Klopp (he has probably just got his breath back) and also our Pick 3 winner who collects a winning dividend of £2,312!

This was a Pick 4 pool for the purists and were it not for a late turnaround from Cardiff in the Friday evening Premier League game, we would have seen a very different outcome for this particular Pick 4 player. In fairness, this £12 ticket was already in the money after leg 2 as they had used Cash Out £103 for 50% of their ticket – pretty shrewd aye, but things would get even better come full time in leg 4.

The earlier mentioned 2-1 Cardiff turnaround in leg three would set up a potentially fruitful dividend should one of the three Correct Scores chosen in the last land. Our punter required 0-0, 0-1 or 1-2 in Sheffield Utd vs Leeds. The match was delicately poised at 0-0 until the last 10 minutes – good enough. Then, on 82 minutes Pablo Hernandez popped up with a late Leeds goal, 0-1 was also good enough, but another late goal either way would surely scupper the 4/4 dream.

Thankfully for our punter, the panic would soon be over and the final result finished with a 1-0 Leeds win! That’s £12 turned into total winnings of £7,755 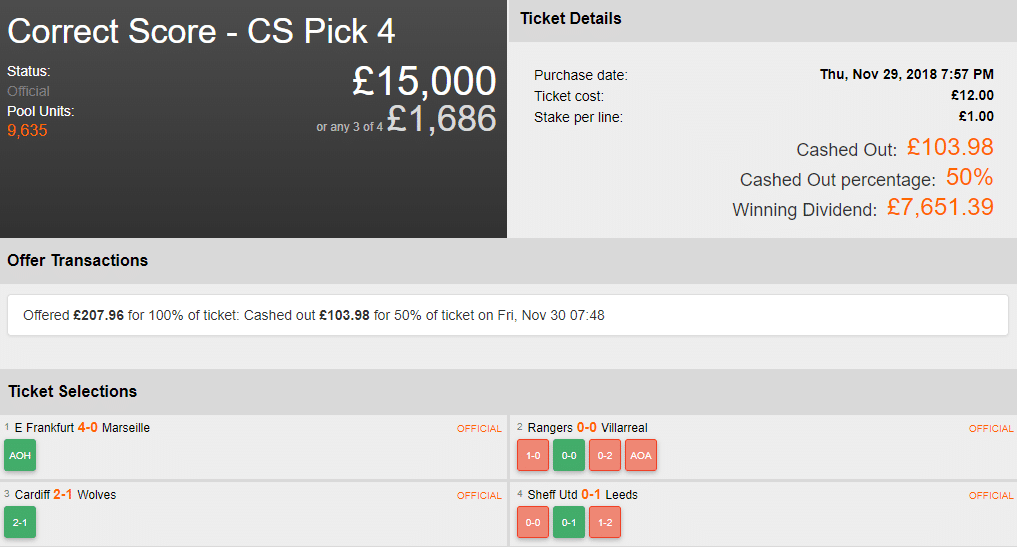