A midweek Pick 4 is always a hugely popular pool, with four big Champions League games taking centre stage. Read about one of the star performances in this week’s weekly winners blog!

Tottenham and Liverpool had nail biting finishes to their final group games, but both managed to qualify for the knockout stages. Spurs held Barcelona to a 1-1 draw in the Nou Camp, while Liverpool saw off Napoli 1-0 at Anfield.

Before Wednesday’s fixture, the customer decided to cash 50% of the ticket for £175, with two home victories needed in Group H.

Juventus and Man Utd had both qualified after matchday 5, but top spot was still up for grabs. An under strength Man Utd were poor in Valencia, while Juventus were shocked by Young Boys, who were winless in their previous five European games.

The 2-1 scorelines were enough to see our customer take home £17.6k from their £48 ticket. Congratulations! 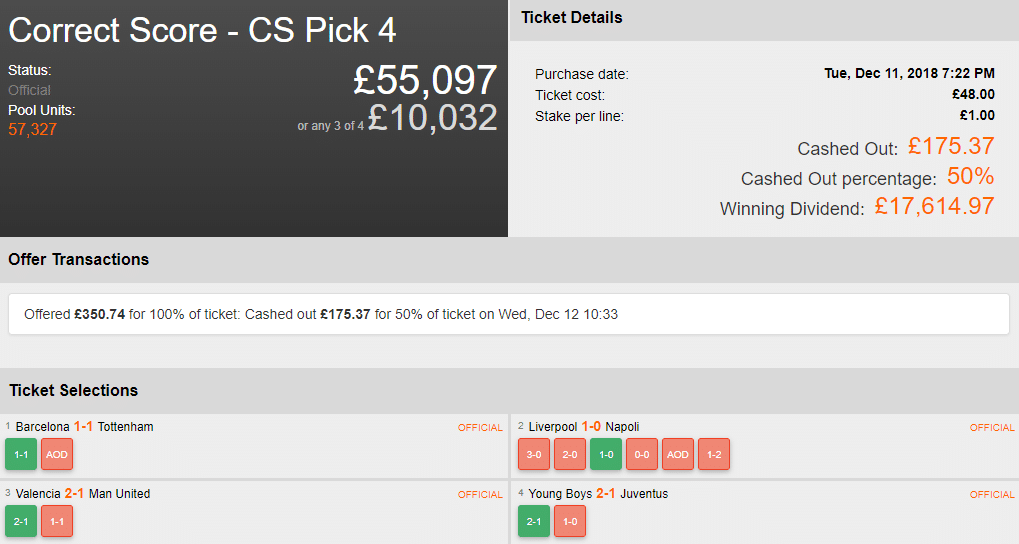 West Brom were once again in front of the TV cameras, this time at Sheffield United. Despite falling behind in the first half, the Baggies rallied. Goals from Gareth Barry and Kieran Gibbs gave them a vital three points in the race for promotion.

Elsewhere, Celta Vigo were held to a goalless draw by Leganes in La Liga, meaning our lucky customer was 2/2 going into Saturday.

There were no Cash Outs on this ticket, so Getafe and Sociedad kicked off leg 3 with the customer still owning 100% of the ticket.

Getafe saw off Sociedad 1-0 meaning the Premier League six pointer between Huddersfield and Newcastle was the final leg, with the Magpies needing to win 1-0 for a bumper pay-out.

Despite Huddersfield controlling large parts of the game, a beautifully worked Newcastle move early in the second half was swept home by Saloman Rondon, and Rafa Benitez’s men held on for a hard earned three points.

The Correct Score big winners weren’t just reserved for our Pick 4 pools! A mere £2 ticket was enough to bag £2.5k on Sunday!

The early La Liga game saw Eibar and Valencia draw 1-1 at the Ipurua Municipal Stadium. A solo line was enough for our player to progress to the afternoon Premier League fixtures.

Arsenal were on a 22-match unbeaten run going into the game, stretching back to a 2-1 defeat at Stamford Bridge on 18 August.

However, Southampton were excellent in Ralph Hasenhuttl’s first home game in charge, as the relegation-threatened South Coast club scored late on to end the Gunners unbeaten run. The 3-2 victory was fully deserved and lifted the Saints out the bottom three. Both lines on the ticket relied on three Southampton goals so our player was certainly breathing a sigh of relief at full time!

The North-West derby was last up, with Liverpool looking to go back to the top of the table by beating their bitter rivals.

The game was painfully one-sided, with the Merseyside club recording a staggering 36 attempts during the match. Despite a blunder from ‘keeper Alisson, two deflected Xherdan Shaqiri efforts saw Jurgen Klopp’s men leapfrog Man City, and go 19 points clear of United.

The defeat also meant Jose Mourinho has overseen the worst start to a Man Utd league campaign in 28 years.

We imagine our customer was more Klopp-like post-match than Mourinho, as the result meant a bumper pay-out! Well done!