It’s been another great week for players at Colossus as those winners keep flowing through the festive period.

Let’s catch up on some of the best winners over the past 5 days.

6 players joined Pistonbroke’s Syndicate into this week’s £110,194 Champions League Pick 4 Rollover that kicked off on Tuesday. The £64.80 ticket covered legs 1 and 2 quite heavily, and they looked to be heading out as Barcelona led Spurs 1-0 with time running out. Lucas Moura to the rescue; his late equaliser helping to send them through to last two legs.

On to Wednesday night then and the Captain had decided to go with three different Valencia wins against Man Utd (2-1, 3-0 and 3-1). Quite sensible you’d think, given the recent form of the reds. Surprisingly though, they had backed Young Boys to beat Juventus with the same three selections!

With both Valencia and Young Boys winning 1-0 at half-time on Wednesday, Pistonbroke made a 30% Cash Out for £88.74, securing the return of each contributors stakes (plus a little extra) and they were now freerolling the rest of the way.

Strangely, Valencia and Young Boys managed to extend their leads to 2-0 in the second half. But both Man Utd and Juve were able to pull a goal back in their respective games, as Dybala’s 80th minute goal was followed by an 87th minute Marcus Rashford strike. Boom!

Both games ended up finishing 2-1 resulting in a huge win for the Syndicate. The 7 person Syndicate went on to share £5,104! Very well done indeed. 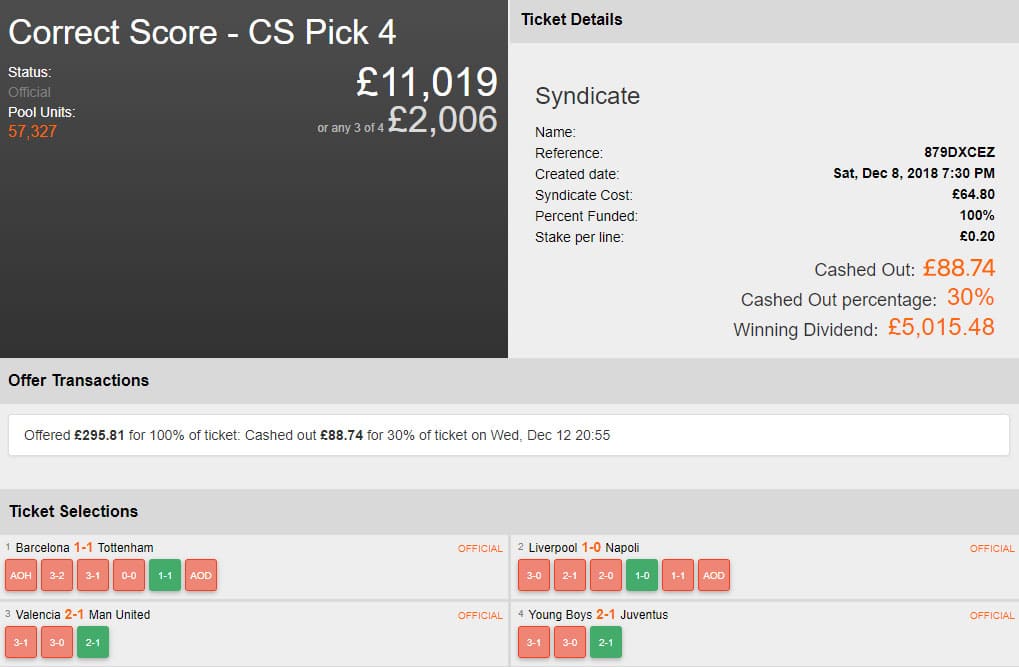 Racing fans were treated to some superb action at Sandown on Saturday, with one lucky customer banking over £3,500 from the Win 4 pool!

With six lines covering the two big handicaps of the day, our player was off to a perfect start when Eminent Poet powered away for trainer Venetia Williams in the Petemps Network Qualifier.

Lalor was a hot favourite in the Henry VIII Novices’ Chase, but our player opted for Paul Nicholls’ Dynamite Dollars, who had finished 8l behind Kayley Wollacott’s Arkle Trial winner at Cheltenham in November. However, the favourite struggled in the gruelling conditions and Dynamite Dollars was able to pick up the pieces under Harry Cobden.

In Leg 3, Man of Plenty was well backed in the market throughout the day and justified support when putting in a good display to take the December Handicap Hurdle. This left everything riding on a certain Nicky Henderson superstar in the final leg and big race of the day.

A sublime Tingle Creek saw Altior power through the mud to see of the gallant Un De Sceaux to complete a magnificent day for our lucky customer.

Regular Captain – ‘im the bkpool tower‘ – created a Syndicate for a Point Margin Pick 5 pool that tipped off on Thursday night, costing £48 and shooting for a possible £2,500.

8 other players joined the Syndicate and they got off to a flying start with dominant victories for both the Celtics and Trail Blazers. The Captain had picked the same four Point Margins in both of these games, with the Celtics winning by 28 points and the Trail Blazers by 22.

Leg 3 was a different proposition with the Captain seemingly unsure about who would win the game, as they selected Point Margin victories for both sides. Interestingly, this included the 25+ Margin for either team. Utah Jazz ended up taking the Houston Rockets to the cleaners, mostly thanks to their sixth man, Derrick Favors, who put up double-double (24 points and 10 rebounds) as they won by 27 points.

There were no Cash Outs up to this point and things looked to be going smoothly. But they had just one Point Margin picked in leg 5 (Charlotte Hornets by 5-8) compared to three Margins in leg 4 – both games tipped off at the same time and would run concurrently.

The Indiana Pacers spoiled the party (leg 4), beating the Magic by 12 points, and ultimately knocked the Syndicate out of the running for the win prize.

However, Kemba Walker sunk a pair free throws with 1 second left on the clock in the 4th to extend the Hornets’ lead over the Nuggets to 6 points, securing a 4/5 Consolation win for the Syndicate. 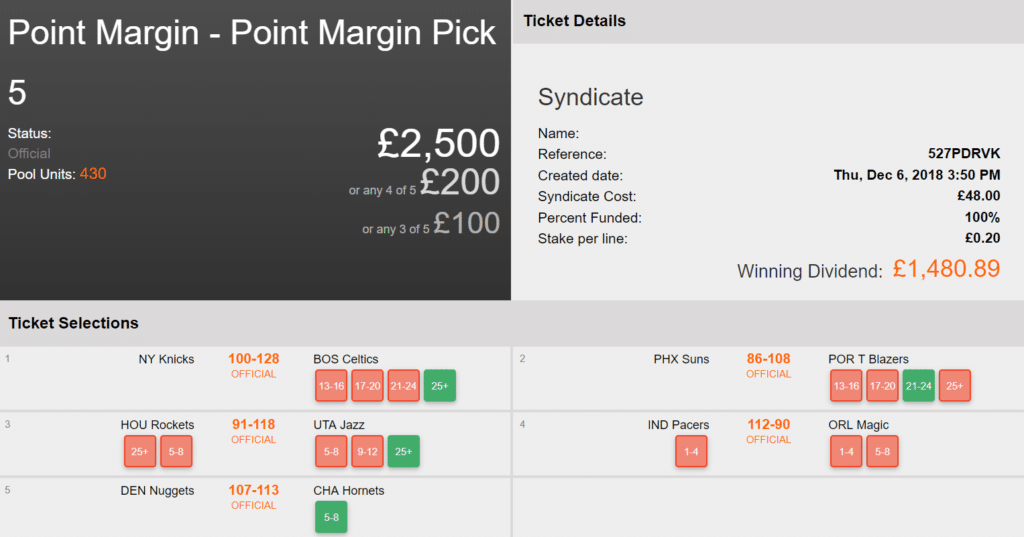 There was a tasty win for one Solo player in our Point Margin Pick 4 that kicked off with Thursday Night Football last week. The well-covered Jags @ Titans game got the player off to a decent start, as a 21 point Titan win landed, reducing the the total units live for the win from 1,279 to 24.6.

The Colts 3 point victory at the impressive Houston Texans helped the customer overcome leg 2, but leg 3 (being played at the same time) went to overtime. The Baltimore Ravens and Kansas City Chiefs were tied on 24 before the Chiefs converted a field goal attempt without reply to win the game by 3 points. Following the end of this game they were now the only ticket left going for the win prize.

A chance to make a Cash Out before the final leg (Eagles @ Cowboys – Sunday’s late game) was passed on by the customer. They were all in, needing a Cowboy victory by 1-6 points. Amazingly, this one went to overtime as well with the Eagles managing 17 points in the 4th quarter!

Dak Prescott’s threw a pass that was deflected and then caught by Amari Cooper who scored a touchdown. Final score: Eagles 23-29 Cowboys, meaning the punter’s 1-6 victory landed and they subsequently won £2,143 from a £36 ticket. Great stuff!