As ever, social media was awash with reactions to the big sport stories of the weekend, some positive, some… less positive.

Undoubtedly the biggest sporting story of the weekend was Tiger Woods winning The Masters for the fifth time. Woods has been beset with physical and personal problems in recent years. In fact, at one point, it looked as though he may never play professional golf again.

So when he sank his winning putt on Sunday evening, claiming victory by a single shot, Twitter went into meltdown with fans revealing their joy at the result. Tennis legend Serena Williams was among them…

I am literally in tears watching @TigerWoods this is Greatness like no other. Knowing all you have been through physically to come back and do what you just did today? Wow Congrats a million times! I am so inspired thank you buddy.

Another fan pointed out the true magnitude of Woods’ comeback…

A true champion.
An absolute #MondayMotivation

However, one prominent golf writer seemingly wasn’t among the ecstatic Tiger fanbase.

There’s an old guy on Tour who has won only one tournament in the last 6 years, hasn’t even played in 3 of the last five Masters and is saddled with very mediocre putting yet is still being touted as a favorite to win the green jacket. Tiger’s cult of personality endures.

Elsewhere on Sunday, it was a huge day in the Premier League as Man City travelled to Crystal Palace before Liverpool had a tricky fixture against Chelsea to navigate. One Liverpool fan felt that opposition fans weren’t treating Liverpool’s title bid with the respect it deserved.

Casual reminder that fans of United, Arsenal and Spurs are seemingly more interested in Liverpool not winning the league than their team finishing in the top four.

They are desperate for a Chelsea win today. Let that sink in.

And, in fairness, he might have had a point. This United fan seemed happy to pay a price for Liverpool slipping up.

And this Chelsea fan saw fit to apologise to the rest of the league for Chelsea’s inability to halt Liverpool’s title march.

– Dear rest of the Premier League,

Elswhere in England, Joey Barton was back in the headlines after his sides 4-2 drubbing away to Barnsley. The Fleetwood manager was arrested for an alleged assault on his opposition number, Daniel Stendel. Unsurprisingly the social media reaction was scathing.

So Joey Barton has “allegedly” assaulted the Barnsley manager in the tunnel today. Had a fan “allegedly” gone anywhere near an opposition player or fan he’d be jailed and banned from even watching football for 10 years. Bet he gets a fine and 2 match touchline ban

And many saw fit to bring up Barton’s now deleted Tweet from 2011, which offered a slightly different stance on conflict resolution. 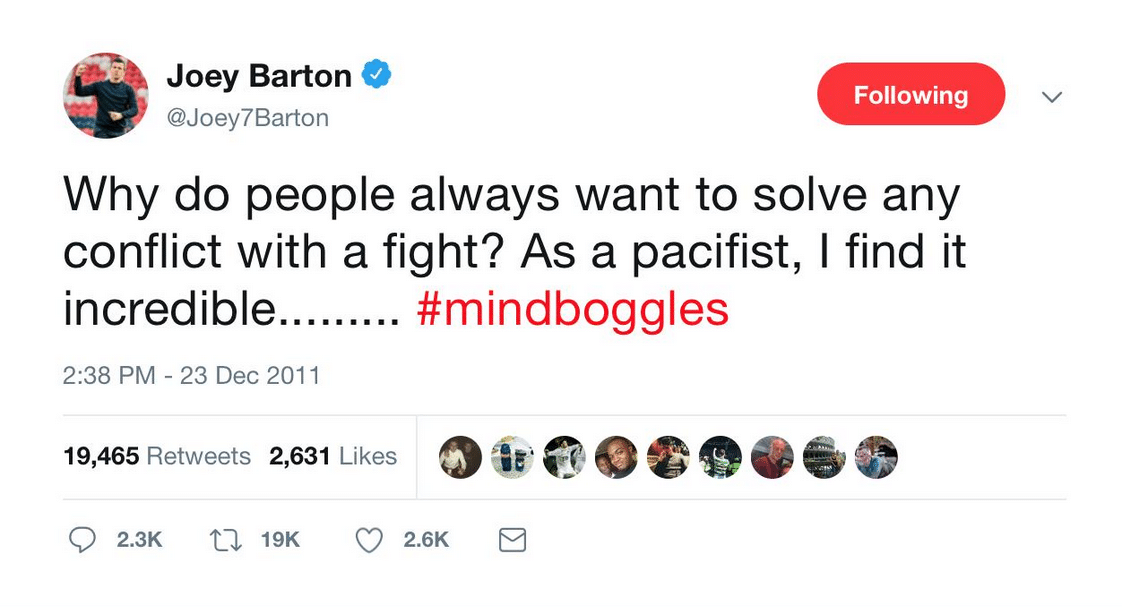