An incredible story unfolded in the Pick 15 over the weekend as a Colossus player landed one of our biggest ever wins.

With a chunky 192 line ticket costing £384, the player was clearly in a bullish mood as he entered the pool and, as the opening legs got underway, his confidence proved justified.

Six of the opening seven legs began at 15:00 on Saturday with the seventh, Nottingham Forest vs. Reading, abandoned due to the weather, ultimately reducing the jackpot to £250,000.

Wins for Brighton, Hull and Millwall as well as draws in the other three active legs, got the ticket off to the perfect start and one which was compounded with victories for Chelsea, 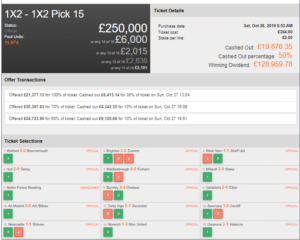 As Sunday came, nine winning legs became ten as Real Sociedad overcame the ten men of Celta Vigo in La Liga’s lunchtime fixture. That victory, coupled with Swansea leading 1-0 at half time in their derby clash against Cardiff, brought a huge Cash Out offer of £21,377 for the ticket.

The player had also selected the draw in the Welsh clash so must have felt supremely confident about making it to full time with another winning leg, eventually opting to sell 30% of the ticket for a cool £6,413.

Swansea duly obliged and, when Wolves salvaged a late draw away to Newcastle, an improved offer of £30,397 rolled in for the remaining 70%. The player sold another 10% which added a further £4,342 to their total but, with just two legs remaining and 60% of their ticket still active, just how much better could it get?

Manchester United’s troubles are well documented but the player had picked them to overcome the injury hit and out of form Norwich at Carrow Road. United have been abysmal away from home recently and a midweek victory over Partizan Belgrade ended a winless run of 11 matches on their travels. They would need to add a second in the space of four days if the ticket was to progress. 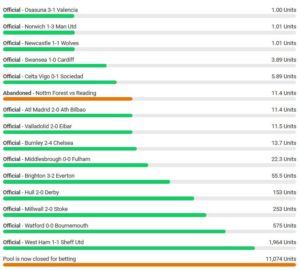 Despite missing two penalties in a chaotic first half, United entered the interval two goals to the good and never truly looked in trouble, eventually running out 3-1 winners. It was an eerily comfortable manner of progressing to a truly colossus final leg.

For his magnificent effort in reaching this stage of the pool, another Cash Out offer arrived and this one was huge. The player was offered £54,723 for the final 60% of his ticket but the big question was how much he trusted Osasuna to overcome Valencia in the decisive leg.

As the 20:00 kick off drew closer there was no sign of a Cash Out but, with just nine minutes remaining, it arrived. The player sold another 10% for an additional £9,120.

With nearly £20,000 already secured for the first 50% of their ticket, the player was going for it with the remaining 50%. Would Osasuna bring the ticket home? After 14 minutes, it didn’t look to be the case as Rodrigo scored the opener for Valencia. It was a nightmarish start.

However, the Spanish international wasn’t the hero for long, becoming a villian for Los Che 15 minutes later as he was given his marching orders. Osasuna had an hour to come back against ten men. Their response was swift and decisive, five minutes later an equaliser arrived and, immediately after the half time interval, they scored another to lead for the first time.

With 66% of the possession, Osasuna were dominating and now looked by far the more likely to score another. Yet despite huffing and puffing, they couldn’t blow Valencia’s defence down for a third time. As long as their lead remained so narrow, the ticket remained in doubt.

Cometh the hour though, cometh Pervis Estupinan. The Peruvian is at loan at Osasuna from Watford and provided the kind of heroics that no Hornet has managed in months as he scored a late winner in the 80th minute. The ticket was safe!

Congratulations from all at Colossus on a brilliant ticket and a life-changing win!

How dramatic was that Osasuna match ? pic.twitter.com/At261mz4Ac