A Betdaq player fully embraced the rich potential of FreePlays and Consolation Prizes at the weekend, turning a freebie into a very tasty return in the £800,000 Pick 15.

The first group of seven matches in the pool went off at 15:00 on Saturday and the player managed to call six of them correctly, predicting wins for Chelsea, Southampton, Villareal, Blackburn, Preston as well as a draw between Brighton and Burnley. 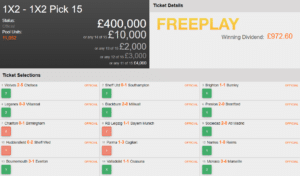 Frustratingly, the only game that let them down came at The Valley where they opted for a draw but Birmingham spoiled the party in the second half by netting the only goal of the game.

Unfortunately one losing leg was immediately followed by another as Bayern Munich allower a lead to slip, ultimately succumbing to a surprising draw with RB Leipzig.

On a positive though, Real Sociedad managed to beat Atletico Madrid meaning that the player finished the day with a not totally disastrous seven legs out of nine.

A strong Sunday would still reap big rewards but the day got off to a stinking start when predicted home wins for Huddersfield over Sheffield Wednesday and Parma over Cagliari didn’t materialise, with the away sides triumphing in both matches.

Four matches remained on the ticket and, with seven legs in the bank, the player needed all of them

to reach the eleven legs required to get among the Consolation Prizes. It was going to take a perfect finish.

Two further winning legs were provided when Kalifa Coulibaly gave Nantes a 1-0 victory over Reims and Bournemouth overcame Everton. The player then went for a draw in the 17:30 encounter between Valladolid and Osasuna, a result which looked under threat when the hosts took the lead in the 65th minute. However, Robert Ibanez proved the hero in the 81st minute, securing Osasuna a point.

It was down to the final leg and the player needed an away victory for Marseille at Monaco. Wissam Ben Yedder put the hosts ahead in the 17th minute after converting a penalty before he doubled the lead nine minutes later to throw the ticket into turmoil. It would require a huge comeback. However, Dario Benedetto then gave the away side a glimmer of hope in the 38th minute before Valere Germain raised the roof by levelling things up on the stroke of half time.

Miraculously. Monaco actually went ahead in the 61st minute through Dimitri Payet before going extended their lead further when Benedetto scored his second. Monaco managed to score a third but it wasn’t enough and victory had been snatched from the jaws of defeat.

As a result of Marseille’s heroics, the player landed a cool £972, a decent share of the £8,000 Consolation pot for tickets with 11 correct legs.

Not a bad return for a no risk bet with four incorrect selections!