We are now well past the halfway stage in the Premier League season – and we are still not a great deal closer to identifying the champions.

Yes, I know that the bookmakers pretty much have it as a straight fight between Man City and Arsenal in the betting – and that will probably turn out to be the case – but both of those sides haven’t really laid down a convincing marker as yet.

You only have to look at the table to see that.

But it is also true that none of the opposition, with the exception of Leicester who have only lost two games all season, have consistently excelled either.

And if Man Utd can still be in fifth place, just seven points off the leaders, after playing a very sterile brand of football for a while – they beat Liverpool 1-0 with their only shot on target on Sunday – it illustrates that the title is still up for grabs to a side that can put a winning run together.

Many thought Tottenham were that team before they suffered a 1-0 home reverse to Leicester last week, and they may still well be, as that was only their third league defeat.

They got back on track with a 4-1 defeat of Sunderland– as well as a 2-0 win at Leicester in the FA Cup on Wednesday night – and are meeting Crystal Palace at the right time, it seems.

Palace are without a win in their last five league games, and even more worryingly have failed to score in any of those defeats, though they did win 2-1 at Southampton in the FA Cup. And they have lost five of their 11 home games.

I go for Tottenham to win 1-0, even if they had the distraction of an FA Cup replay at Leicester on Wednesday night.

Normally every Sam Allardyce side fighting relegation starts with keeping clean sheets, but that hasn’t been the case with Sunderland and they concede far too many goals, as again evidenced in a 4-1 loss at Tottenham.

But, to be fair, they have only conceded 11 goals in 10 home games. But I just think Bournemouth could just have too much for them, as they did when winning the reverse fixture 2-0 in September.

Bournemouth to win 2-1 for me.

When Man City are in top form – or rather Aguero and Silva are – they are an irresistible force and Palace were on the wrong end of one of those displays last week. And West Ham’s unbeaten run came to an end in a 2-1 defeat at Newcastle.

I do fancy City to win this – and 3-1 is my favoured score line – but I am willing to accept many will give the Hammers a chance here, given that they won 2-1 at the Etihad earlier in the season and City’s away record is very poor for a top-flight side.

They say the league table doesn’t lie but no way am I accepting that Everton’s 11th place reflects how good they are. And they will be rightfully seething after Chelsea’s last-gasp, offside, equaliser last weekend. 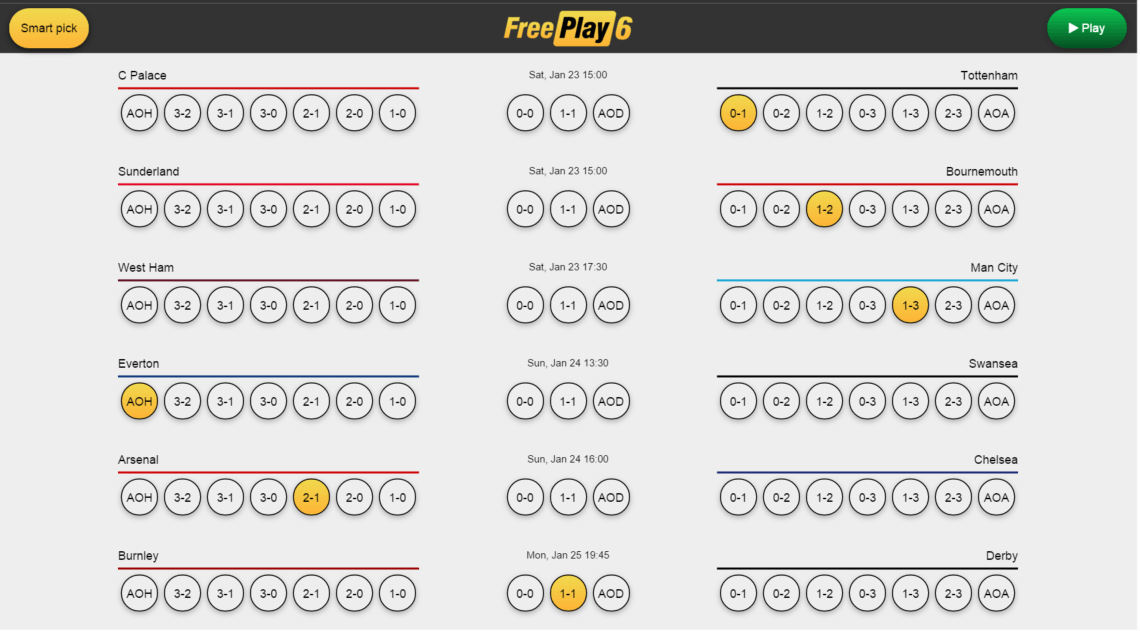 Their defensive home record is the worst in the league with 20 goals conceded but they are only second to Man City in the goal scoring stakes, and I fancy they will dispatch a struggling Swansea side (notwithstanding their 1-0 win over Watford on Monday night) with some ease.

They have blown away some of the worst sides in the league, beating Sunderland 6-2 and Villa 4-0, and I go Any Other Home (AOH) here.

I think everyone has been guilty of expecting Chelsea to flick a switch and move up swiftly up the table, but the improved performances just haven’t been forthcoming. They are playing like a mid-table side.

Their fans can point to their excellent record in this fixture – they haven’t lost to them in the league since 2011 – and the fact the Gunners can blow hot and cold.

But Arsenal must be strong favourites here at home, and even more so if Sanchez and Ozil are fit, and I take them to stop the rot in this fixture and win 2-1.

No real opinion in the Burnley v Derby match, in truth, so I will go with 1-1.

There is only a point between them near the top of the Championship table, and they drew 0-0 in September.