Champions Bayern kick off the Bundesliga campaign with the visit of Bayer Leverkusen, hoping to put a dreadful pre-season behind them. While results are usually overlooked as a team gears up for a new season, the manner of defeats to the likes of AC Milan and Liverpool were certainly cause for concern.

That said, however, the hosts should still be backed as strong favourites against a B04 side under new management in the form of rookie boss Heiko Herrlich, who arrives from Jahn Regensburg having guided the club to the second tier last season. It’s a baptism of fire for the 45-year-old then, who needs to get a tune out of a side that massively underperformed to finish 12th last season.

Without a point from their opening three games, Burton are once again among the favourites for relegation having been written off last time around. Nigel Clough’s side certainly exceeded expectations but their lowly budget may hold them back this season, while Birmingham have made some astute signings under Harry Redknapp.

The Blues are a decent outside bet for a play-off finish having narrowly avoided the drop last season, though the loss of Che Adams through injury is a blow and the goals may be hard to come by. The visitors should have enough to come away with at least a point.

United’s opener against West Ham could hardly have gone any better, strengthening the assumption of many that Mourinho’s men will be genuine title contenders this time around. A Lukaku brace along with a goal from Paul Pogba to silence his critics early on was just what the doctor ordered, while Nemanja Matic’s debut performance was impressive, with the back four rarely troubled.

Swansea picked up a good point at St. Mary’s but boy were they fortunate to do so, mustering 4 shots to Southampton’s 29. With Llorente still sidelined and Sigurdsson also out of the picture with a move to Everton looming it’s likely to be a tough start to the campaign for Clement’s side.

It was a case of same old, same old for Saints in their aforementioned opener with Swansea, failing to make a number of opportunities count having boasted the worst chance conversion rate in the Premier League last season. There were positives for new manager Pellegrino to take from the performance, however, which is not something that could be said of West Ham.

There was some optimism in East London following some notable summer signings but all that seemed to dissipate with a woeful showing at Old Trafford. They’ll be looking to bounce back as a result but Southampton are a similarly well-drilled side so an away win – and repeat result of last season – is unlikely. 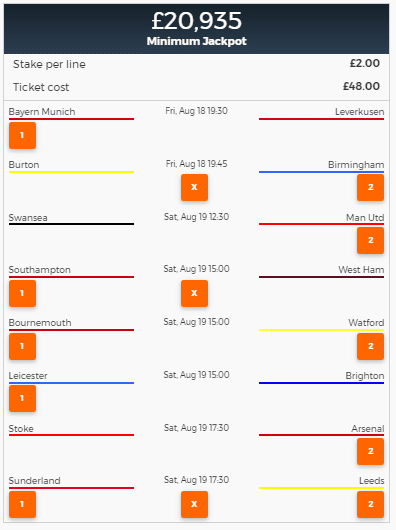 There is reason for encouragement for both of these sides this season following some big money arrivals and while Bournemouth underwhelmed at West Brom last weekend, Marco Silva did his burgeoning reputation no harm with a draw against Liverpool. Another stalemate is less likely on the south coast, though, where Bournemouth drew just 4 times last season, while Watford shared the spoils in just three away games.

I’m going against recent results between these sides, however, with each of their four Premier League meetings ending in draws. There’ll be goals at both ends, I’m sure, but both teams will be aiming to get their first win on the board, which should make for an entertaining game.

They may have lost on the opening night but there was cause for encouragement for Leicester, who looked back to their clinical best, with Jamie Vardy, in particular, beginning the campaign in fine form. Brighton also put in a strong display against Manchester City before eventually tiring in the latter stages but the Seagulls aren’t particularly geared up to play against a side of the Foxes’ ilk.

Both of these sides are strong on the counter but it’s the hosts that certainly boast the stronger attack in that regard and as such, Shakespeare’s men should bounce back from defeat. Despite a disappointing title defence in general, the 2015/16 champions were strong at home last time around and that advantage should be decisive.

Having ended a torrid run of results at the Britannia Stadium, which had become a very unhappy hunting ground for the Gunners, with an emphatic victory last season, that hoodoo should no longer hang over the visitors’ heads. They’ll be buoyant having come from behind to win against Leicester but the game highlighted that their defensive issues are far from behind them.

Stoke are tipped by some to struggle this season and didn’t offer a great threat at Everton, and it isn’t just Arsenal that have begun to overcome the wet and windy conditions in the Potteries. Hughes’ men picked up a modest 27 points at home last season – their lowest since promotion in 2008 – and they aren’t likely to get any on Saturday.

Leeds have started life under Thomas Christiansen in solid fashion, unbeaten in their opening three games after back-to-back 0-0 draws. They face a Sunderland side that were tipped to have problems back in the second tier but as yet, at the time of writing, have silenced some critics under former Whites boss Simon Grayson.

This is a tough game to call to close the ticket so here’s hoping the first seven come in and I can sit back and relax to wait to find out my winnings!

Come join me, why don’t you? PLAY HERE