Tottenham travel to Huddersfield in the lunchtime kick-off on Saturday looking to maintain their fine form away from Wembley. Spurs have won all three of their away games in the Premier League so far and with Harry Kane in a rich vein of goalscoring form it could be a long afternoon for Huddersfield. Premier League new boys Huddersfield have proved they will be no pushovers this season, but Tottenham’s quality in the final third should see them edge this game.

This is a vital game for West Ham manager Slaven Bilic as pressure continues to build on him and the home fans will expect all three points against Swansea. West Ham showed good battling qualities to run Tottenham close in their last outing, but much of that was down to the fact that Spurs were down to ten men. Swansea are unbeaten away from home so far this season and have conceded just one goal, but their problems lie at the other end of the pitch as they have struggled to score goals. Andy Carroll is working his way back to fitness and he could be the difference in this game in what should be a much-needed victory for the Hammers. 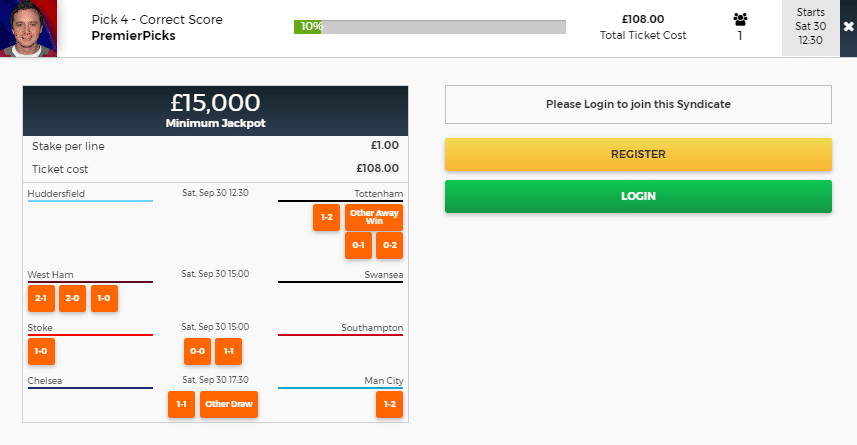 Stoke play host to Southampton aiming to kick-start their campaign after a difficult run of fixtures in their first six games. Mark Hughes’ men have played Chelsea, Manchester United, Arsenal already this term and they have recorded just one win from those opening six games. Saturday’s visit of Southampton offers them the chance of claiming all three points with the Saints again struggling for goals having failed to net in four of their opening six matches. I don’t envisage many goals in this game, but home advantage should be key to Stoke picking up the victory here.

The game of the weekend and arguably the contest of the season so far as these two title challengers square up at Stamford Bridge. Chelsea did the double over City last season and these games against your title rivals go a long way to deciding the outcome of the championship. The extra day’s rest for City from the midweek Champions League exploits for both clubs could prove the difference for the visitors, but Chelsea will be determined not to lose the game and fall six points behind City even at this early junction of the campaign. The attacking talent on display from both sides should ensure an entertaining, high-scoring affair and I feel a draw would suit both teams.