Martin Laurence is back with his Pick 8 preview!

Saturday’s pool kicks off at Anfield with Liverpool vs Man Utd. Read below to find his preview and his Syndicate…

While there’s no question as to the side entering this fierce rivalry in greater form, it’s foolish to write Liverpool off in such matches under Jurgen Klopp. The German’s record against sides in the top six since his appointment is very impressive, while he’s had the better of Mourinho historically too, losing just one of seven meetings.

Neither side will be at full strength, with Mane sidelined for the hosts and Pogba and Fellaini missing for the visitors, and as such this is even tougher to call. Factor in that this is United’s first real test and I’m not going to put my neck on the line either way. For those gutsy enough to do so, however, my head says draw.

There will be no upset in this one, I’m confident of that, with Palace pointless, goalless and now striker-less to boot. Wilf Zaha’s return can’t come soon enough but even if he is rushed back, the absence of Blues loanee Loftus-Cheek is a big blow.

Conte may make some changes ahead of a Champions League fixture next week, with Morata likely to miss out through injury, but his squad is looking more healthy now Hazard is back fully fit, along with summer signing Tiemoue Bakayoko. As such it may be tough to predict the visitors’ line-up but not the outcome of their trip to Selhurst Park.

It’s been a fine start to the campaign for Sean Dyche’s men, sitting pretty in sixth having suffered just one defeat in seven matches. Things haven’t been so rosy for West Ham, who may have merely extended Slaven Bilic’s stay of execution with a late winner against Swansea last time out.

The Hammers have been very poor on the road, with just one point from four games. In what is likely to be a real physical battle, I’d back the hosts to come away with at least a point and potentially pile more pressure on the West Ham boss.

One of the tougher games to call on this weekend’s Pick 8, this is the sort of match that both Swansea and Huddersfield will have identified as an important one to win. Clement’s men in particular will be under pressure to show far more attacking intent than they’ve mustered thus far given their home advantage, as a draw wouldn’t send the fans home happy.

One point would be a better outcome for the visitors but even they will be keen to avoid a stalemate, with meetings with United, Liverpool, Chelsea and Arsenal all to come before the end of next month. As such I see this one ending in a narrow victory either way. 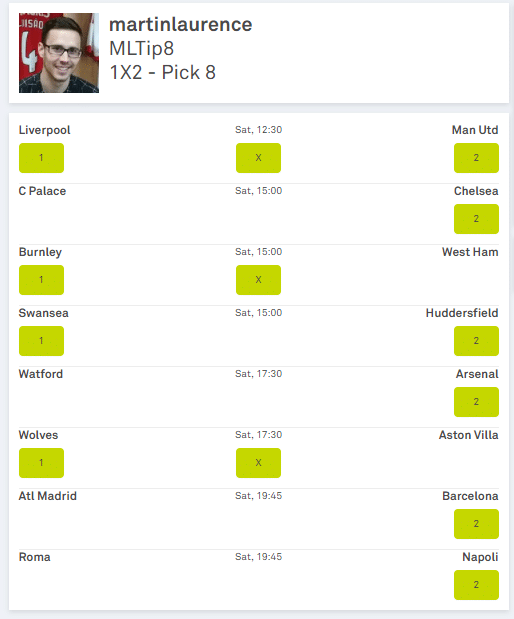 While it’s been a strong start to life under Marco Silva in general for the Hornets, much of their early season success has come on the road thus far. Just two of the twelve points they’ve accrued to now have come at Vicarage Road, with Arsenal the latest side hoping to extend Watford’s wait for a home win.

The Gunners, conversely, are yet to taste victory away from home but did pick up form ahead of the international break, particularly from a defensive point of view. Ten points from four games came courtesy of four clean sheets and Wenger seems to have a greater handle on his side after an unconvincing start, finding a better balance since Alex Iwobi came in for Mesut Ozil.

A big game at the business end of the Championship, these two Midlands rivals are among the favourites for the title, with a reinvented Wolves understandably well fancied following a fine start to the season. Villa struggled badly in the opening weeks of the campaign by comparison but the return of Jonathan Kodjia has really boosted morale and Steve Bruce now has a settled system for the first time since his appointment.

Key to the visitors’ progress has been their ability to win on the road having been dismal away from home for years. It should be noted that consecutive convincing wins on their travels have come against modest opposition though, and this will be a far sterner test of their promotion credentials. It’s likely to be a tight game but if one side were to edge it I’d favour Wolves on home advantage alone.

While both of these sides are unbeaten at the start of their respective La Liga campaigns, it’s Barca that hold a significant advantage ahead of Saturday night’s encounter. The blaugrana were tipped to struggle this season, particularly following a heavy aggregate defeat to Real Madrid in the Supercopa, but Ernesto Valverde has silenced some early critics already.

That said, the leaders have enjoyed a favourable fixture list thus far, so the trip to the Wanda Metropolitano represents their first real test in the league. Atleti have dropped points against sides they would have expected to beat this season and look a little off the pace at this early stage, so I fancy Barca to stretch their perfect start this weekend, with Lionel Messi in flying form.

While it was Roma that came closest to testing Juve’s dominance at the top last season, Napoli were just a point behind and look the real deal this time around. Sarri has a side that now seem capable of winning the league, making a faultless start after seven matches, with Mertens and Insigne beginning this campaign as they ended the last.

The Partenopei’s side is packed with goals and play some of the most entertaining football on the continent, with a settled, fluid system, where their hosts have had to make some changes. Eusebio Di Francesco has taken the hot seat and started well but Mo Salah will prove difficult to replace over the course of the season and I think the visitors will have too much for them on Saturday.

Tedious, but Southgate’s England are nowhere near as bad as we may think
Pass Liverpool Test and Phil Jones’ Doubters Will Have to Take Notice