Some people slowly achieve greatness, others were just born great! Colossus Syndicate captain, Brandon25, achieved instant greatness with his debut Syndicate. He said “…I was too nervous to even keep up to date with the scores”. Read on to find out more from the captain himself.

He decided to play his first Colossus Syndicates into Monday’s Pick 4 pool. Playing 48 lines at £0.50 each, he had created his Syndicate- ‘Attempt #1’. With 50% of the ticket cost funded by Brandon25, he needed others to fund the rest of his Syndicate.

After five contributions, the £24 ticket had been fully funded and was ready to go.

Legs one and two both kicked off on Monday night. After Katai equalised for Alaves against Sevilla, leg one’s selection of 1-0 had come in.

In leg two, 1-3 and 1-2 were needed to progress the Syndicate to Tuesday. Chelsea took a commanding 2-0 lead after only fifty minutes but a West Ham goal was needed still. After 90 minutes, the score was still 2-0 and the Syndicate looked on the verge of an early exit. But, in the 92nd minute of the game, Lanzini scores for the Hammers and sends this Syndicate into leg three. 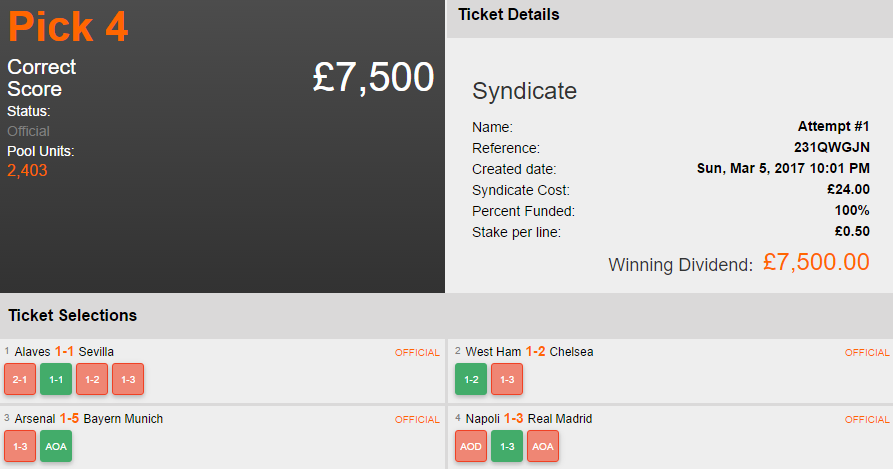 After Laurent Koscielny’s red card for Arsenal, Bayern made short work of Arsenal. The German side grabbed a third consecutive 5-1 win over the North Londoners, landing the AOA result. Three correct legs so far…

Sergio Ramos’ two goals to bring Madrid back from 1-0 down set the ticket up well. With AOA, AOD and 1-3 all selected and looking good. But no more goals came in the 90 minutes. It wasn’t until the 91st minute when Alvaro Morata scored for Madrid and sent the Syndicate on its way to a £7,500 win!

When asked about his success, Brandon25 replied “Oh god, put me on the spot a bit! I’m still a little bit in shock to be honest. I’ve never won anything near this amount before, after Lanzini’s injury time goal on Monday I was too nervous to even keep up to date with the scores. I checked them at half time and thought it was all over!”.

Before adding, “The syndicate function is a great way to fund more combinations on a ticket increasing your chance of winning. I will definitely be using the function again, I have my second attempt that has got full funding starting tonight so am hoping for some more luck!”.

Not a bad return from his first ever Syndicate contribution!

Think Brandon25 will continue his success? Make sure you follow him by searching for his profile and keep an eye on his twitter feed for Syndicate tickets. 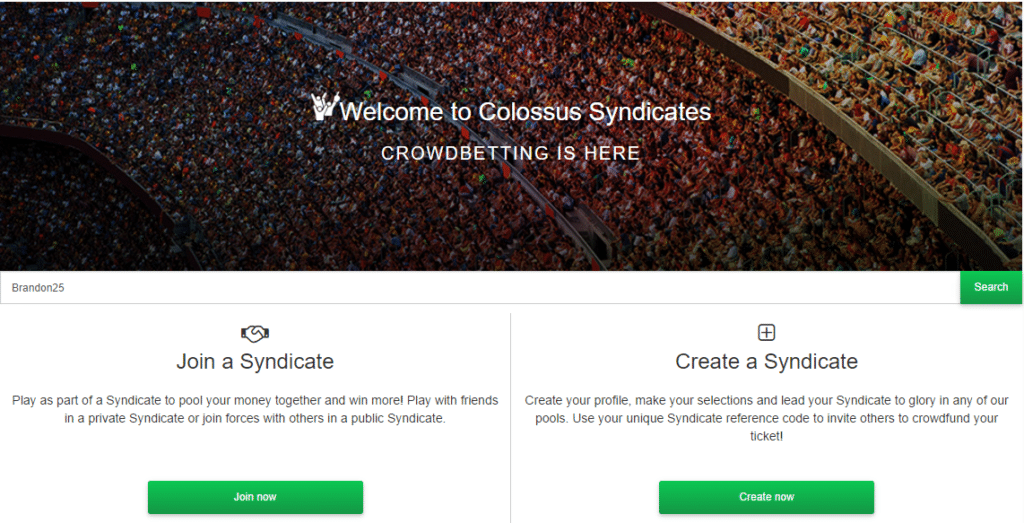