After going very close to getting a ‘full house’ of 8 out of 8 in last weekend’s Pick 8, the latest round of fixtures has thrown up some interesting matches for this weekend’s competition, and the action gets underway with the Championship fixture at the DW Stadium, where Wigan welcome Bristol City.

It is going to be a very quick turnaround for these 2 teams as they both played on Tuesday night where there were mixed fortunes for the teams. Wigan enjoyed a 2-1 home win over Hull which saw them continue their unbeaten home start to the season – 3 wins, and a draw -, whilst Bristol City saw a 4 game winning run , during which they conceded just one goal,come to an abrupt halt as they went down 4-2 at West Brom, Currently there is just a single point between the teams with visitors City having that slight advantage.Due to being in different leagues over the years, the teams have only met twice in recent seasons when in 2016-17, Bristol City won both games. A very difficult game to call, so I will cover all 3 outcomes.

The early Premier League game takes place at Craven Cottage where the teams will be meeting in the top flight for the first time since the 2006-07 season with both games in that season being drawn.The most recent meetings came in back in the 2014-15 season when Watford won both games to nil, with Troy Deeney scoring 4 of the 6 goals that his team scored.Having made a better then expected start to the campaign, Watford will feel that they should have gained at least a point from their last game against Man United, and it will be interesting to see how they react to their first league defeat of the season. Fulham have made an indifferent return to the Premier League having recorded just win win so far – at home against Burnley – and they will be hoping to perform better than they did at the Etihad last Saturday. Has Watford’s bubble burst ? or can they react with a positive result ?

The hosts are sitting rock bottom of the Premier League after taking just a single point which they gained in their opening day draw at Southampton, and they are now on a run of no Premier League win from their last 10 games, 3 draws, 7 defeats. Scoring has been a problem so far with only Hendrick and Tarkowski (2) finding the net. The teams have only met 4 times in the Premier League, last season saw a win apiece, with both teams winning away, and the season before, both teams won the home fixture.

On current form this should be a comfortable away win with Bournemouth sitting in 5th place having lost just once this season away at Chelsea, and Eddie Howe’s side came from behind to win at Turf Moor on the last game of last season, a result that I expect to be repeated this weekend.

The away side have made a miserable start to the season having lost 4 out of their opening 5 fixtures, and they travel to London looking for their first win of the current campaign. Only one of Newcastle’s first 5 games has not ended in a 2-1 defeat, and that was in the game against Cardiff where a scoreless draw gave the Geordies their only point so far. This will be Palace’s third home league game, and so far they have yet to win, or score in their previous 2 fixtures. The last meeting at Selhurst ended in a 1-1 draw, and apart from one convincing 5-1 win over Newcastle back in the 2015-16 season, Palace have not done well at home against their visitors in the Premiership/Premier League, losing 5, and drawing 2 of their clashes.  With Palace not having the best of home starts,the statistics would point to a Newcastle win, but for me it looks like a game that the away team won’t lose. 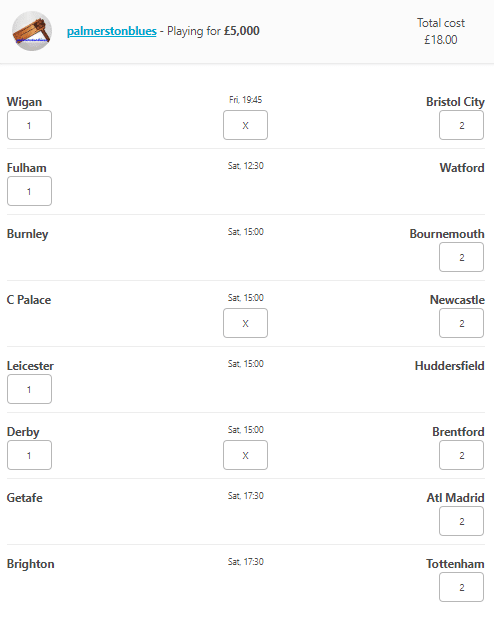 The next game on the list completes the games which involve the current bottom three of the Premier League, as Huddersfield, the lowest scoring team travel to the King Power looking for their first league win since April. Clearly, scoring goals has been a major problem for Huddersfield, with only 2 so far this season, and just 7 in their last 15 Premier League games. It is hard to see anything other than a home win in this game and with Leicester scoring in all 6 of their competitive games this season, and Huddersfield not winning a league game at Leicester since 1954, this surely is the banker home win of the day.

Both of these teams had to settle for a point from their midweek games, and for the hosts it was a second league game without a goal, as following on from the defeat at Rotherham, they failed to find a breakthrough against Blackburn on Tuesday after doing everything but score in a game that they dominated for large parts of the game. The Rams currently have 13 points from their opening 8 games which equates to nothing but a mediocre start, but the scoreless draw against Blackburn now means that they have at least kept 3 consecutive league clean sheets at home. Visitors Brentford have started the campaign extremely well and are currently third in the table having lost just once, however their good start has been down to the form they have shown at home where they have collected 12 points from 12. On the road, the Bees have yet to win, and although I expect them to score – as they have done in 17 of their last 19 Championship games, I think Derby will at least be worth a share of the points, and in a game that could go anyway, I will cover all options.

It is still early days in La Liga, but after losing – predictably – in their opening league game against Real Madrid, Getafe have remained unbeaten following their next 3 games, and in the process of taking 7 points, have also kept 3 clean sheets. Last time out they recorded a rather surprising away win against Sevilla thanks to 2 goals from last seasons top scorer, Angel. However they have a very poor record against Atletico. Last season, and in seasons 2015-16, and 2014-15, Atletico won 1-0 at Getafe, and 2-0 in Madrid, and during the last 14 meetings between the teams in all competitions, Getafe have only scored in 1 of those games on a day when they also recorded their first win against their Madrid rivals for 14 games. Although the visitors have not made the best of starts in La Liga, with just the one win, they produced an excellent performance to come from behind to win against Monaco in France in their midweek Champions League game, and should be good enough to maintain their excellent form at the Alfonso Perez.

The final game in this weekends Pick 8 is the late kick-off on Saturday where Brighton host a seemingly out of sorts, Tottenham. After winning their opening 3 league games, Spurs have now lost their last 2 Premier League matches, and following their late goal defeat in Milan, they have now lost 3 successive games for the first time under Mauricio Pochettino, and according to many pundits, are now in decline. Hosts Brighton have only one won Premier League game so far this season, a memorable 3-2 home win over Man United. Before that win, the Seagulls had only managed to win just one of their last four home league games, and that was also against Man Utd !!

Despite their recent run, Spurs are the favourites to win this one, and although their form has been very mixed, I also think that Spurs will just about win a very close game with maybe just a goal between the teams.