The ticket featured eight lines, though most came courtesy of the opening leg, Portugal vs. Netherlands, in which the player had made four selections.

With 0-0, 1-1, 1-0 and 2-1 all selected, the player clearly felt as though Portugal had the edge in the UEFA Nations League final, a notion that proved accurate when Goncalo Guedes rifled home the opening goal from just outside the box in the 60th minute.

There were ultimately no further goals, meaning that the Portuguese lifted the cup and the ticket was off to a perfect start.

In the second leg the player had little hesitation about the outcome, backing Spain to win 3-0. They must have been concerned when, with five minutes left, the Spanish led by a single goal. However, late strikes from Chelsea outcast Alvaro Morato and Mikel Oyarzabal landed the 3-0 in the nick of time.

While the action was unfolding in Spain, the third leg in the ticket was also underway in Olomouc, where the Czech Republic were hosting Montenegro. Seemingly confident that the Czechs would also score three, the player supported 3-0 and 3-1 scorelines. A late Czech penalty gave them a 3-0 victory and, more importantly, secured the player a third winning leg.

11,950 units had begun the pool but, as a consequence of the opening three results, only 12 remained to face the final leg, a 99.9% reduction. 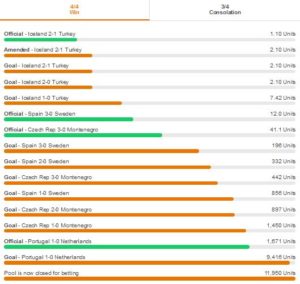 With three legs in the bag, the player’s hopes rested squarely on the shoulders of Iceland, who were taking on a Turkey side in fine form. The Turkish had won five consecutive matches, including most recently beating world champions France on Saturday.

Despite the impressive run, the player clearly felt as though Iceland had the edge and backed them to emerge as 2-1 winners.

A brace from Ragnar Sigurdsson put Iceland 2-0 up after 32 minutes but Turkey pulled one back on the brink of half-time to make it 2-1. The predicted 2-1 scoreline was in and they simply needed no more goals to get the ticket home.

The second half was end-to-end and saw the two sides produce a combined 16 shots on goal but, despite Turkey dominating possession, the equaliser it never came. The match finished 2-1 and the ticket had landed.